1.5.16 IAW&A Salon: In the beginning was the Word, but first came the Irish. -Malachy McCourt

Judging by our first Salon of the year at Bar Thalia, 2016 will be a banner year for IAW&A. Host and Salon producer John Kearns announced the first road Salon (Molloy College, Long Island, February 26th) and that IAW&A will participate in the NYC commemoration of the 1916 Easter Rising. At the Thalia, we welcomed three new presenters, saw the return of old friends, and had so many talented folks on the bill, we had no time for intermission. 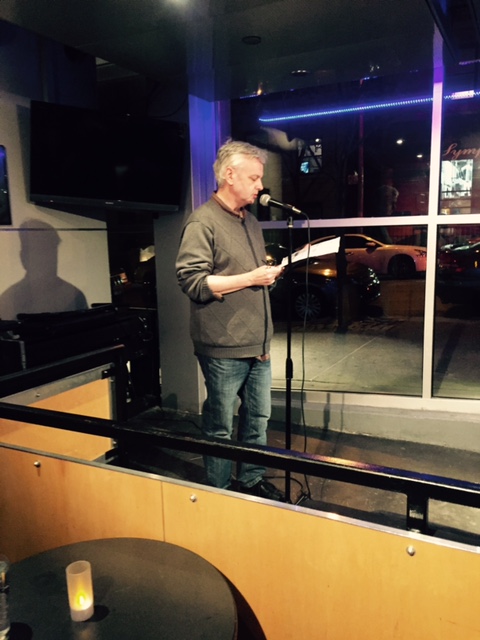 Starting the fireworks, Seamus Scanlon read a flash fiction piece about a pyromaniac called, “The Great Fire of Galway.” The story will be published in February on the AkashicBooks.com Mondays Are Murder feature. Seamus went from the freezing NYC to the Key West Literary Seminar where, he reports, he has met no Irish people so far! His new website is www.seamusscanlon.com 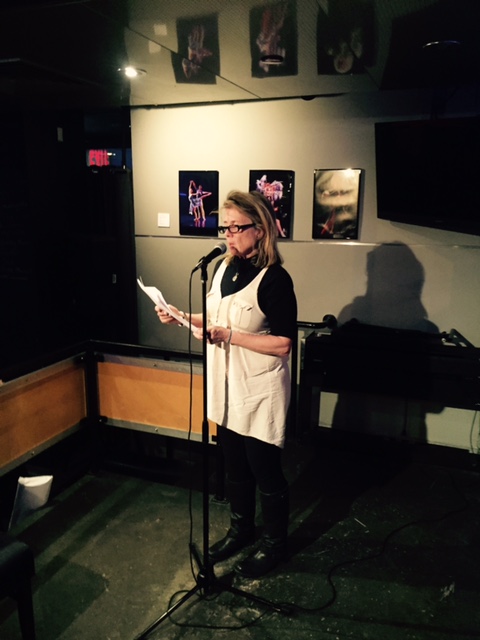 Demonstrating the range of her talent, Jenifer Margaret Kelly read a poem “The First Snow,” a prose poem, “ Antibody” and a monologue, “The Muffin Man.” 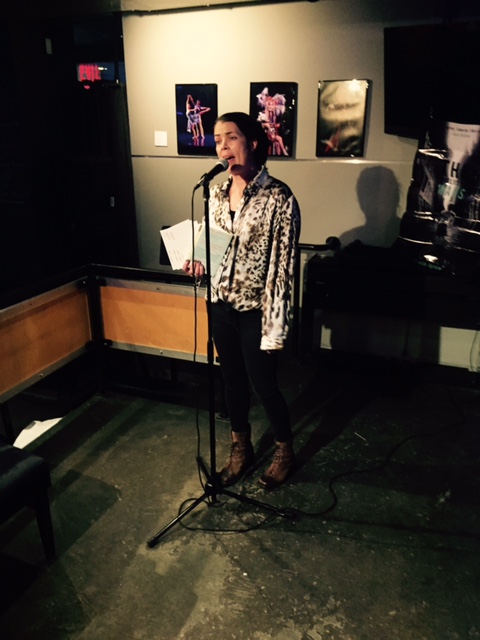 Sheila Agnew described her journeys from New York to Dublin, London, Mexico City and back and from lawyer to novelist. Author of several popular YA novels, Sheila has a timely new adult thriller, The Exclusion Wars, about a Latino teenager in hiding in New York in 2025 after President Trent has come to power. Says Eoin Colfer, author of Artemis Fowl, “Slick writing, a fascinating premise and a rollercoaster plot, Agnew’s The Exclusion Wars is a book that needed to be written and needs to be read.” More at http://sheila-agnew.com

Tom Mahon told a poignant story of two weary sisters caring for their mother on Christmas Eve. Their brother is a veteran, who is in prison for using and selling drugs. The son is their mother’s favorite. So one sister writes a letter for him so their mother, in her dementia, can dream of her son holding her before she dies. 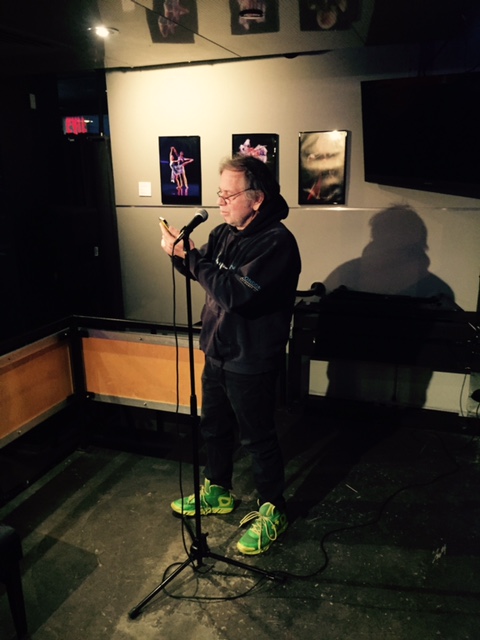 In his second IAW&A appearance, Brent Shearer read his short story “Piss of the Faithful.” A writer whose blog can be found at  inthefrontrowonthedole.blogspot.com, Brent claims that he “publishes short things in obscure places. 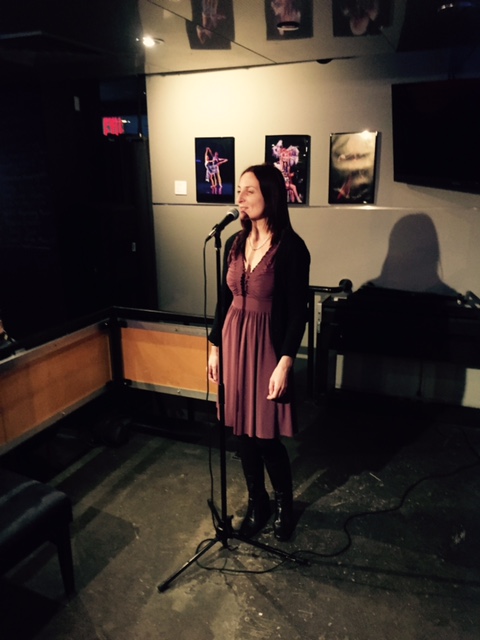 Yes, I said yes. Irish actor/singer Eilin O’Dea gave a thrilling interpretation of Molly Bloom’s soliloquy from her “Joyce’s Women” production. More about her at EilinODea.com

IAW&A Salon first-timer (and John Kearns’s fellow Saint Joe’s Prep alumnus) Bill McGarvey, musician, singer, songwriter sang two terrific compositions. “Not Alone,” from his Beautiful Mess album is a quiet meditation on the search for one’s place in the cosmos. “Standing Next to Gloria Steinem” from his Tell Your Mother album deals with a real-life experience of encountering the feminist icon on the #6 train in NYC. For more of Bill’s work, go to billmcgarvey.com.

In another Salon debut, Katharine McNair presented her poetry, “The FDR,” “Brothers,” “Broken Heart Melodies,” and three pieces from her musical in progress, a Cinderella story set in 1929 New Orleans. An MFA and multi-talent, Katharine’s work has been published in Poetry in Performance Volume 43, and online at BigCityLit.com, and her children’s literature has been published on StoryShares.org. Find her at Zincrest.com 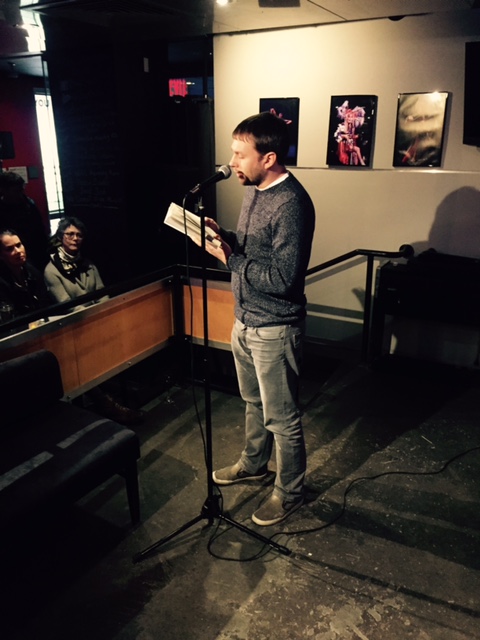 IAW&A board member Sean Carlson has returned after his recent wedding to Cathlin Olszewski in Grand Rapids, Michigan. Cathlin and her mother joined us at Bar Thalia for Sean’s first reading in several months. His piece from his yet-untitled family memoir reflected on immigrant journeys and those left behind. The heartbreaking story of a young woman departing Ireland for Sacramento by way of airports in Newfoundland, New York and Los Angeles carries echoes of Colm Tóibín’s Brooklyn. More at www.seancarlson.net. 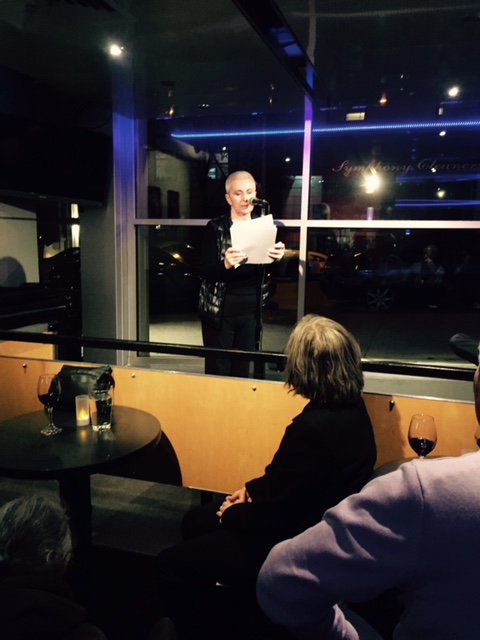 Another writer making her Salon debut, Rita Reidy Lennick read a sensitive piece from her memoir and we encourage her to come back and read more.

A welcome return to the Salon, Jim Rodgers read the first chapter from his novel, Long Night’s End. The chapter introduces the main characters, the themes to be explored, and the continual angst and heartache the protagonist, Johnny Gunn, will exhibit throughout the novel. This all comes out through Johnny Gunn’s thoughts as he plays his guitar in a Lower East Side club, along with his aging band mates.

Singer, songwriter, musician John Munnelly finds the Salon a comfortable place to debut new work. Tuesday he played for the first time a song he’s been working on since the summer, and that he was rewriting and editing right up until he played it for us. John’s take on a Zen Koan, the likely title is “Why is the One, Both the Same?”

In summing up a fine evening, Malachy McCourt, self-described “anchor baby,” declared, “In the beginning was the Word, but first came the Irish.”

And we can’t add to that.