Sarah presented some poetic and humorous new material. One bit with some authentic New York spin on the old classic question “Where are you from?”

Sarah also read a poem highlighting some annoying phrases like “really quick” and the over usage of the word “so.” Sarah brought up Lizzie Donahue, a new IAWA member, to join in a reading of a new scene titled “And Again…Niiiiiiiiiiice” where the two characters sit and talk on a beach in Rockaway looking out to sea.

Lizzie Donahue read a short fiction piece based on a conversation her 8-year-old self allegedly had with her mom.  The subject: compulsory motherhood.

Marian Fontana read a humorous and insightful piece called “A History of Shrinks” about her experiences with therapists over the years.

Rita Mullaney presented two stories about her days in the New York Police Department, including the tale of a woman who cooked for and took care of officers in the local precinct.  Rita rescued a portrait of this woman from the garbage.

Tom Mahon and Sheila Walsh read the last scene in Act One of Sheila’s play-in-progress: When The Deep Purple Falls.  In the scene, a daughter’s wedding announcement exposes the regrets and longings in her parents’ long marriage.   Sheila thanks Tom for hitting all the right notes. 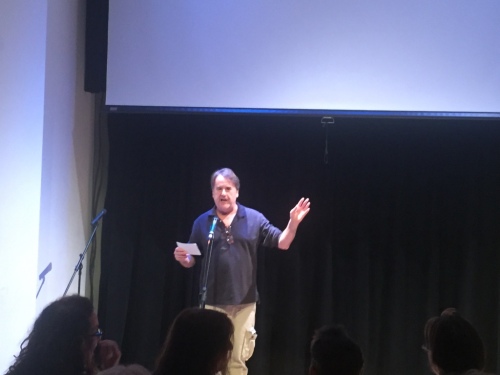 John McDonagh tried out some new material for his one man play, Cabtivist, about driving a yellow cab in NYC for the last 35 years. Cabtivist was developed at the IAW&A Salon and had a successful run in the New York Fringe Festival.

Rosina Fernhof moved the audience with a dramatic monologue.

Kathleen O’Sullivan presented an iMovie chapter from her graphic novel Isham Street. This chapter, “The Movies,” describes the child’s adventure every Saturday going to Woolworth’s for her ritual bag of chips followed by a six-hour movie extravaganza where she and all the neighborhood kids swarm up and down the aisles, eat, visit, and conspire to help kids sneaking in. There’s so much going on, she doesn’t know where to look – at Laurel & Hardy running from the cops or the matrons running after the illegal kids.

Marcia Loughran was happy to be back at the Cell with this wonderful group of writers and musicians. The weather was crazy hot so she read a poem about the end of times/ apocalypse, “Imagine October”, published in the Newtown Literary last fall. She also read a mini-essay or ‘messay’ about Cuba, and shared a new poem.

Louise Crawford read a story about dealing with a sexually-harassing bartender and how she was able to use social media to get a sincere apology from the man.

Singer-songwriter, John Munnelly played three original songs, his Irish Zen song, “Why is the One Both the Same?,” “Kings & Jesters,” and  “The Funeral Blues”.

Join us for our next IAW&A Salon at Bar Thalia on Thursday, November 3rd!  Maureen Hossbacher will be hosting.