The first October IAW&A Salon would seem to have a somber theme, with contributions dealing with loss, mourning and remembrance. However, the performers’ talent and variety, coupled with the goodwill of the salongoers made for an uplifting night. Hosted by John Kearns, the mood was enlivened by the Salon debut of two comic actors and performances by two Salon musical favorites. 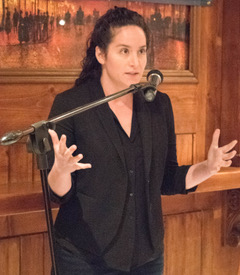 The Salon opened with the first of two dramatic monologues. Dan Brown presented “Melrose,” an original monologue that captures a woman and her relationship at their breaking points. Written and directed by Dan, the piece was performed with passion and humor by actress, singer and writer Courtney Alana Ward. See her website.

An unusual Christmas story, Ray Lindie’s“ The Christmas Bullet” is based on an actual incident, when seven-year-old Ray was shot in the arm by a fourteen-year-old neighbor on West 102nd Street. Ray’s character appeared in another Salon piece “Monsters of the Park West” and will appear in more memoir vignettes, promises Ray. 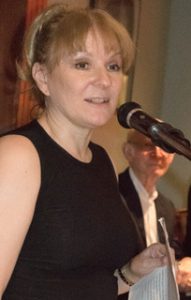 When Karen Frances McCarthy’s fiancé died, she moved into in a huge old house in rural Virginia to grieve alone. When strange, scary things started to happen – furniture moving, floorboards creaking and electronics turning on – she set about trying to discover what was going on. We’ll learn more, in her memoir Till Death Don’t Us Part, to be released next year. A former political journalist and war correspondent for the Irish Times, Karen writes about religion and spirituality for Beliefnet and the Huffington Post. 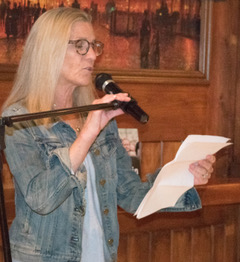 Visiting from Ireland with his new book, Martin McGuinness: The Man I Knew, Jude Collins is an author and political commentator for BBC and RTE. A great speaker, he shared his impression of McGuinness and read brief excerpts. For the book he interviewed 27 individuals on their interactions with McGuinness, including Senator George Mitchell who discusses his key role in the peace process, Ian Paisley’s widow and Gerry Adams. http://www.judecollins.com 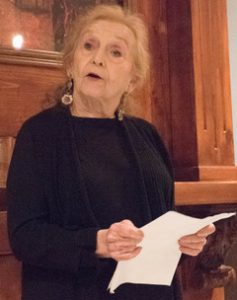 Rosina Fernhoff performed Gordon Gilbert’s monologue about Freddie Oversteegen, who as a teenager was a Dutch resistance fighter in World War II. Gordon was inspired to create the piece after reading Oversteegen’s obituary in the NY Times in September, and he knew that Rosina would be the perfect choice to bring her to life. 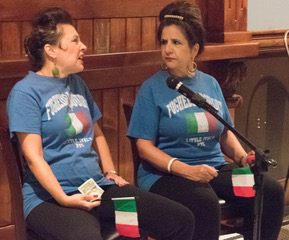 Two skillful, experienced actresses, Anita Salvate and Marilyn Matarrese, brought the laughs, along with their alter egos, Patty and Patty® from their hit comedy web series of the same name. Calling their characters “two middle-aged Italian American broads,” who sit on 9th Avenue in Hell’s Kitchen watching the world go by, they realize they don’t quite fit in anymore. The Pattys ponder the meaning of “this internet thing… tofu sausage…and panini presses,” among other existential issues. Read more on their website. 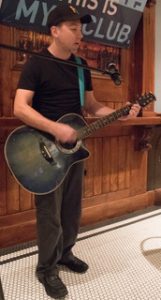 Two musical artists ended the night; the inimitable Guenevere Donohue gave us a sean nos song. Musician/singer/songwriter/actor John Paul Skocik played three songs of his own composition, including “Keys on the Counter” and “You’re No Good.”

The next Salon is Tuesday October16, 7PM, at The Irish Repertory Theatre, 132 West 22nd Street.