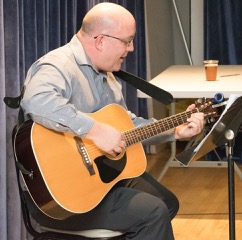 The early December IAW&A Salon at The Thalia Studio opened with tributes to two late, lamented rock stars. First up was John Kearns’acoustic version of “Break on Through” in honor of the 75th birthday of IAW&A Hall of Famer, Jim Morrison. 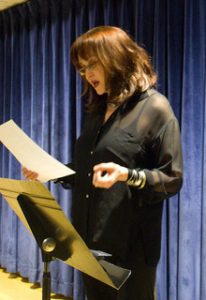 Poet/photographer/playwright Margaret McCarthy’s The Sacrificial King: A Play for John Lennon explores fame and the artistic process in alternating scenes from Lennon’s life and that of a young fan who will become an artist herself. Margaret performed two insightful monologues, in which a young John realizes he was “different than most” and later shows his frustration with fame after he’s hit the “toppermost of the poppermost.” 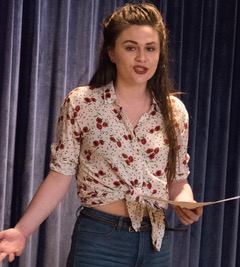 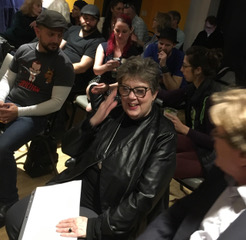 Kathleen Vaughan presented a piece from her beautiful memoir-in-progress, Raised by Nuns and Drunks. In this scene, an eight-year-old Kate, giving in to her feeling of abandonment, commits a sacrilege in her Catholic orphanage: stomping on a crucifix and cursing God with her worst Bronx vulgarity. Kate realized that the nun who witnessed her outrage, never snitched, and that those stoic nuns were not so inhuman after all. 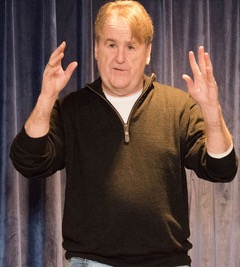 Storyteller, cab driver/activist, Cabtivist, John McDonagh told a hilarious true story dating to the1980s when he managed to put a Christmas message to Irish prisoners on a Times Square billboard. This sparked an international incident, with the NY Times headline,  “IRA Lights Up Times Square.” 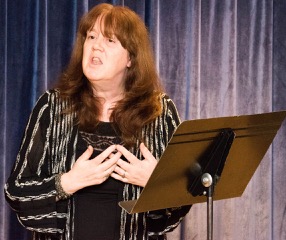 Helen O’Shea, a Salon first timer, charmed us with a preview of her song, “Christmas Blessings,” performing the lyrics as a poem and singing a cappella. The song gently reminds us that not everyone is joyful in this festive season and urges us to make an effort to lighten each other’s load. “Christmas Blessings” will be released on Friday, December 14th on iTunes, Amazon and other online sources. Helen calls her style  “AmeriCeltiCana, Americana with a Celtic twist.” She’ll be appearing at The Bitter End, NYC on December 30th.
For more information please visit her website.

Writer/performer Alan Gary returned for his second Salon reading, with two very personal short pieces that recalled his childhood, beginning with a tender tribute to his best friend. Alan capped it with a deeply touching and comedic remembrance of his Mom, a ring and the Cub Scouts.  Alan invites you to learn about his adventures in show biz.  Check out and enjoy his fan page on Facebook. 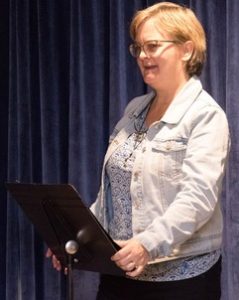 A published poet and warm and generous presence, Marcia B. Loughran shared two new poems, “Forgetfulness” (after Billy Collins’ poem of the same name), describing a ‘forest of fluttering post-its” and “Stuttering Farewell” in which struggles to bid goodbye to a work colleague. Marcia’s messay – mini-essay- “Miya’s First Christmas,” kicked off the holiday season.

John Munnelly gave us “a world premiere” of his folk-song from the workingman’s perspective; called “Sharecropper,” and an animated rendition of his funny relationship song that’s a big hit in France. It asks the dreaded question, “Does My Bum Look Big in This?” and answers wisely, “Your derriere looks ‘grand’ in everything, ma cherie!”  John sang his joyful seasonal favorite “Happy Christmas.” Watch it here on YouTube. Not only does he make great music, John makes a wicked hot sauce, available online at hattwood.com at the Butcher Block in Queens and in person at Park Slope Sunday Farmers Market. 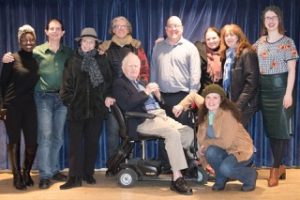 Malachy McCourt ended the Salon with his usual blessing: a comment about the wonder of Irish poets and writers, a reminiscence of his own schooling, a recitation of a sophisticated Noel Coward lyric, and a parting song.

Mark your calendar for the Christmas Salon and Party at The Cell, on Tuesday, December 18th at 7pm.