The first half of this salon at The Cell theatre featured a conversation between novelists Kathleen Hill (Still Waters in Niger and Who Occupies This House) and Mary Pat Kelly (Of Irish Blood and Galway Bay) to celebrate the publication of Hill’s new memoir, She Read to Us in the Late Afternoons: A Life in Novels. The conversation focused on her well-travelled and fascinating life and the novels that have shaped it.  Works by Willa Cather, Chinua Achebe, Henry James, George Bernanos and Proust illuminate memorable experiences, from Hill’s first understanding of death as a young girl, to her marriage and teaching career in Nigeria, her grappling with awareness of the poverty that surrounds her in post-war northern France, and the six-year project to read Proust aloud to her dear friend Diana Trilling whose eyesight is failing. 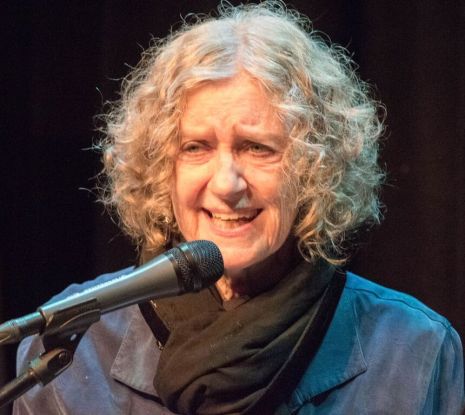 During the Q&A session that followed, audience member Honor Molloy spoke for many when she expressed her delight in this type of event that focuses on one writer’s work and process. Also thoroughly enjoying the evening were Maureen Kennedy and Kent Covey of the Irish Heritage Center of Greater Cincinnati. This was the third book launch by Irish American Writers & Artists, Inc. this year, the first two promoting Mary Gordon’s and Malachy McCourt’s latest works (There Your Heart Lies and Death Need Not Be Fatal).

After an intermission for book signing and refreshments, host Mary Pat Kelly got the second half underway by introducing three first-time IAW&A presenters, starting with a lively reading by Myra Goldberg from an untitled work in progress, loosely based on Homer’s Odyssey and featuring a female traveller named Uli, who is working her way back from the war in Vietnam. Goldberg is a faculty colleague of Kathleen Hill’s at Sarah Lawrence College and author of the novel Rosalind (Zoland Books, 1996). 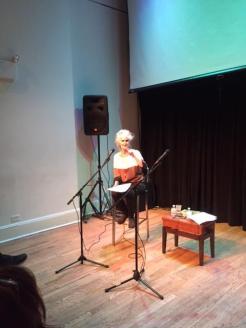 Rachel Aydt read from her memoir now in the final stages of revision, entitled Latchkey, set against the backdrop of the New Age ‘80s in Santa Fe, New Mexico. The coming-of-age story is a love letter to the landscape, to the little brother she co-raised, and to her devoted single mother. Connecting with the salon’s opening theme of the indispensability of books in our lives, the excerpt included a mention of the blond folding bookshelf that moved with her from home to home in her youth. Aydt is an Assistant Professor at the New School and an accomplished freelance writer and editor.

Keyera Bowens, pictured at right, read two engrossing pieces, the first, “Allure,” a flash fiction about a woman traveling home, lulled by the noise on the bus. Thoughts of a troublesome lover she can’t, or won’t, let go are merged with glimpses of gentrification, of change that’s occurring whether residents realize it or not. The second piece, “Quicksand,” is a poem about an interracial relationship. A black woman describes the comfort as well as the awkwardness she feels when she is seen with her white boyfriend. She realizes the restrictions she puts on her relationship are imposed by society and she can only be free when she sheds the stereotypes and social constructs.  “Allure” is included in Bowens’ collection of stories Somewhere in America, which was the thesis for her MFA   degree at Sarah Lawrence. Her response to an audience question about her creative process — that it mainly is dependent on having to meet a deadline —  drew laughter and knowing nods from the writers in the crowd.  Photo by John Kearns.

Choreographer Darrah Carr and several members of her dance company  provided a grand finale by giving us a sample of a new, evening-length collaboration with musicians Dana Lyn and Kyle Sanna that will premiere at the Irish Arts Center in 2018. Combining Modern and Irish dance in a unique style called ModERIN, the presentation began with each dancer first executing a solo movement in silence, then uniting in a dance to the haunting music of Lyn and Sanna, from their album “The Great Arc.”  We look forward to Darrah Carr Dance  returning to the IAW&A salon on December 19th to present additional new material, including a solo by TONY award winner Trent Kowalik, best known for playing the original Billy in Broadway’s “Billy Elliot.”

Darrah Carr, left, and her troupe. Photo by Cat Dwyer.