By Karen Daly and Maureen Hossbacher

Music –  pop, jazz, theater, Irish, folk  – filled the air at the early November Salon at Bar Thalia on Thursday, November 3rd. Maureen Hossbacher skillfully hosted a program that, in addition to all the wonderful music, had poetry, comedy and Irish history. 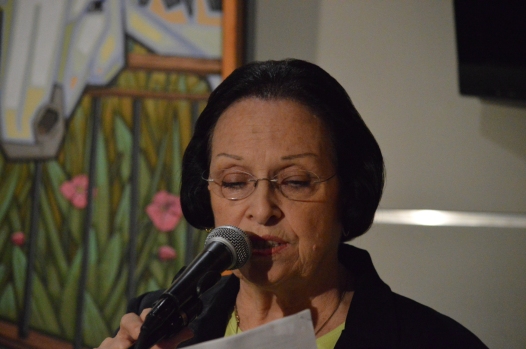 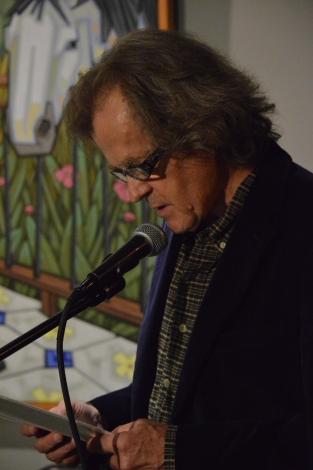 Poet, playwright and well-known monologist on the Greenwich Village literary scene Gordon Gilbert, Jr., read two love poems. One, short and poignant, is about a brief affair and the second poem recalled a lost love on the first anniversary of the loss. 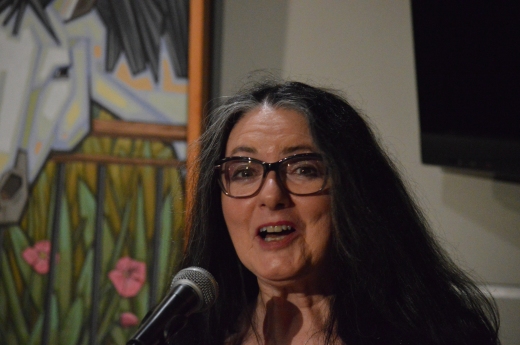 Ghosts of the 1916 Easter Rising extended their Halloween visit with a Salon appearance. Dolores Nolan,  Dublin native, New York media executive, actress and singer, tenderly portrayed the nurse Margaret Keogh, who was the first victim of the Easter Rising. Rebel leader James Connolly dashed on stage to rouse the troops, in the person of Mark Donnelly. Fresh from a meeting of the Industrial Workers of the World, the firebrand Connolly let his audience know that Labor was fully behind Ireland’s movement to be free from British rule. He left the stage just as quickly as he appeared, needing to keep his movements secret in the buildup to the Easter Rising. Karen Daly told the story of Winifred Carney, known as the “Typist with a Webley (revolver).” A close ally of Connolly’s, she was with him in the GPO, and dedicated her life to improving the conditions of workers in the linen mills of Belfast. 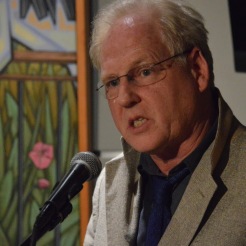 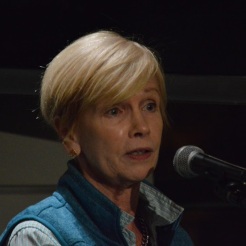 Marcia Loughran, a prize-winning poet, and nurse practitioner, received her MFA in Creative Writing from the Bennington Writing Seminars. Her chapbook, Still Life With Weather, won the 2016 WaterSedge Poetry Chapbook Prize. She read a summer poem, “Wading with Isabella,” and “Airplane Poem,” which she claims  is looking for a middle and a new Messay, Marcia’s term for mini-essay. Marcia was thrilled to get feedback on her new work and the feeling is mutual. 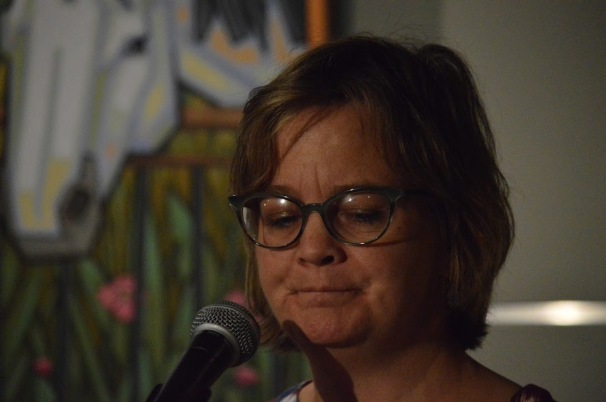 Mary Deady has travelled the world as the lead soprano with the National Folk Theater of Ireland, and in New York, her performances have ranged from a solo concert at the Irish Repertory to cabaret at the West Bank Cafe. Tonight she sang in Irish An Raibh Tú ag an gCarraig? ( “Were You at the Rock?”) and a beautiful rendition of “How are Things in Glocca Morra?” that brought a tear to many an eye. 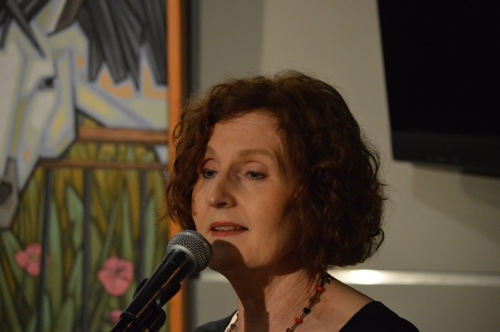 Our host Maureen Hossbacher marked the recent death of Tom Hayden, calling him as “a great Irish American, a great patriot, (and)…courageous warrior for peace and equality.” Echoing the theme of the 1916 Rising, Maureen sang “Four Green Fields.” 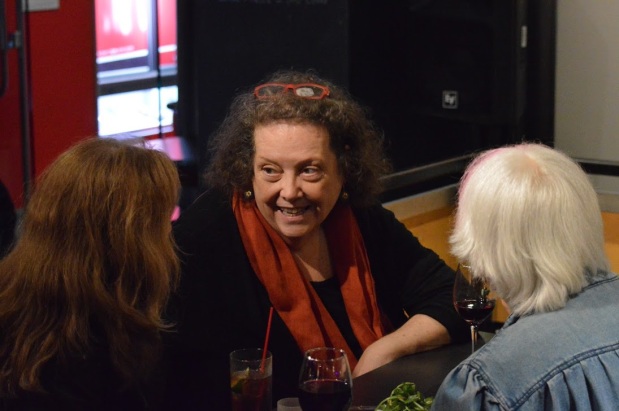 John McDonagh tried out some new material for his hilarious  (no exaggeration) one-man show  Cabtivist  which draws on his 35 years driving a yellow cab in NYC.  Among his tales, we learned that Brooklyn hipsters want their babies born in Manhattan. John’s a  writer, political activist and spoken word artist. More tales at cabtivist.com 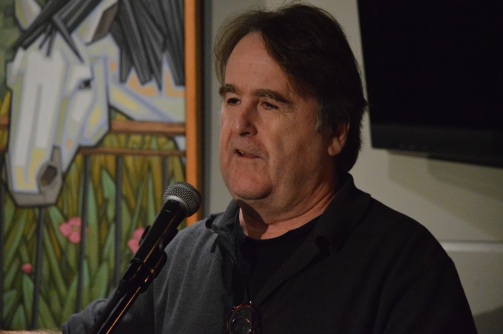 Two Salon regulars gamely stepped in to accommodate schedule changes. Mark William Butler sang one of his original Christmas songs, “I’m Sick of All the Toys.” That’s Santa’s song from Mark’s play Ugly Christmas Sweater, the Musical. Mark says he hadn’t rehearsed, but had a lot of fun with it, as did the audience. Jack DiMonte, whose voice Maureen described as “a sexy baritone”  performed two songs that are very popular among jazz singers and jazz fans – “Small Day Tomorrow” and “All The Sad Young Men,” both with lyrics by Fran Landesman. 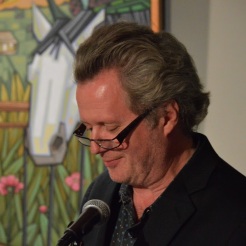 The John Munnally School of Songwriting was ably represented by John Munnallyhimself and two of his students. John, a musician, songwriter, visual artist, and actor is always happy to try out new work at the Salon. He describes tonight’s song, so new it’s not titled, as “…a pop song with a BoDiddley/Buddy Holly rhythm, a ‘whoopy chorus’ and a boy-meets-girl-boy-loses-girl theme and a modulation thrown in for good measure.” 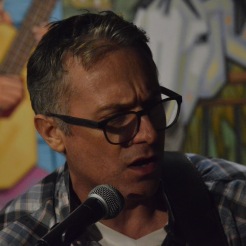 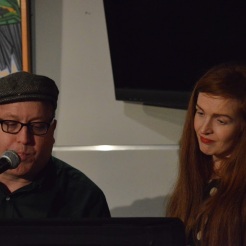 John’s student, Dee Gavin, sang “The Cruel Mother,” also known as “The Greenwood Side,” a ballad about murder, which she cites for its hypnotic quality. Dee is an artist, musician, designer and photographer originally from the West of Ireland, whose landscape informs much of her visual art. John’s other student is Board Member and Salon producer host, novelist, playwright, poet, and  historian  John Kearns. He tried out a new (and rough) song with old words — based on his poem, “The Song of the Anthracite Coal Miner” from his play, Sons of Molly Maguire. Dee Gavin created the chorus and helped sing it.  John notes that the poem was published five years ago this week in the broadsheet, Poetry for the Masses: https://www.behance.net/gallery/1119461/Poetry-for-the-Masses.  To learn more about the John Munnelly School of Songwriting, go to http://songcompose.com/teach-songwriting/http://www.irishartscenter.org/classes/voice.html 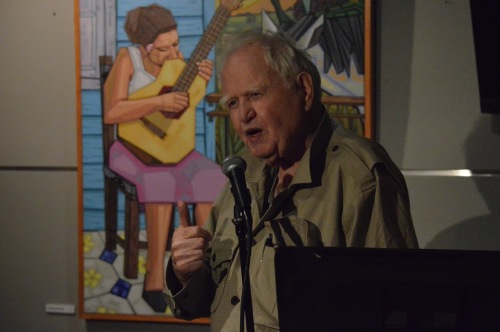 The legendary Malachy McCourt, author, raconteur, actor, singer and Salon founder, was particularly eloquent tonight, still basking in the love and joy that attended our party honoring him with the Eugene OʼNeill Lifetime Achievement Award last month. He spoke of his love for words (“There’s no bad language, only bad usage.”) and of his lucky, charmed life. And we’re lucky and charmed by his presence.

See you next time, Tuesday, November 15 at The Cell. 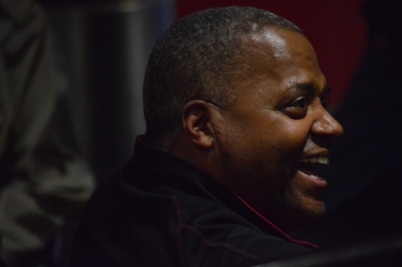 An audience member enjoying the night.