The early December IAW&A Salon at Bar Thalia had that magic mix of talent and personalities that makes each Salon unique. The night’s offerings ranged from intensely felt social commentary to satire, comedy, poetry and rock’n’roll.

John Kearns, Salon producer and host, welcomed the group to the first December salon and kicked off the night with a passage from his novel,Worlds. In the continuing story of the Logan family, Sarsfield Logan, S.J. explains in a letter to his sister that he was raised with two faiths – in Catholicism and in American social mobility. His faith in the latter is shaken, however, when he observes life in the slums near Greenwich Village and the ornate buildings on Riverside Drive owned by the factory owners who exploit the slum dwellers. 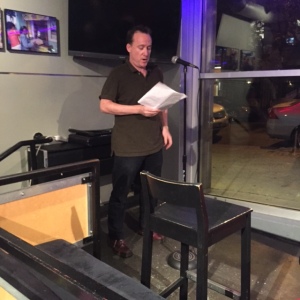 Michael Fitzpatrick’s satirical blog “Humans of Irish America” features real interviews with imaginary immigrants. Tonight he read one piece from the blog, and on a more serious note, a poem about the events in Paris two weeks ago, and another poem, about dropping his 5-year-old son at school. Find them on his website: heraldypress.com.

Inspired by Malachy McCourt’s impassioned speech at the last Bar Thalia Salon, actor Rosina Fernhoff created a monologue from The Visit by the Swiss playwright Friedrich Dürrenmatt. Rosina describes the piece as “dark, sardonic and profound play about corruption, greed and the disintegration of human value.” One stunning line: “The world made me a whore. I will make the world a brothel.”

Brent Shearer, making his IAW&A debut, read his story about getting an Irish passport and his dream of going on the dole in Ireland. Let’s just say he got the passport. A writer who blogs about going to a lot of readings at  inthefrontrowonthedole.blogspot.com, Brent says “So when I say your Tuesday night thing at Bar Thalia rocked, I’m speaking ex cathedra.”

John McDonagh did a segment from his solo play Cabtivist. Tonight he compared the life of a Central Park carriage horse to that of a NYC cabdriver. Guess which one gets medical check-ups, mandated time-off, lives on the Upper West Side and retires to a stud farm? You’ll have a chance to see the full show at The Cell on December 16. Tickets at www.thecelltheatre.org/events/2015/12/16/cabtivist 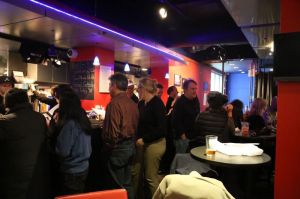 Socializing during the break

Maureen Hossbacher read a chapter from one of her novels in progress, Gaitham Hall, a thriller with supernatural undertones. The advantage of having two books in progress, she says, is that she can turn to the thriller for respite when she gets frustrated with her more serious novel. Maureen entertained the audience with the banter of two main characters in a scene from Gaitham Hall, set in the midlands of Ireland.

Jenifer Margaret Kelly calls herself  “mainly a playwright” but she’s presented several beautiful poems at recent Salons. Tonight she read three more: “Charcoal Autumn Sunday,” “ You Could Have Written This Poem” and “Evened Out.”

Sister act: Judy Doris read her sister Adrienne Foran’s charming story “The Princess Bus,” about the love between the M15 bus and her driver —from the bus’ point of view.

Author/playwright/actor Honor Molloy delivered a passionate reading of her Irish Echoarticle extolling Irish women in New York City’s theatre scene and their contribution to New York’s cultural life. Her essay is particularly relevant given the controversy raging about the Abbey Theater and its signal failure to adequately represent a female perspective during their 2016 Season. Its yearlong tribute to the 1916 Rebellion and its aftermath features ten plays, with only one authored by a woman. 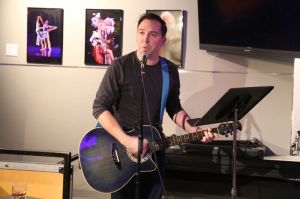 Musician/singer/songwriter John Paul Skocik closed out the night playing original songs. John’s former band on the self-titled album “Girl To Gorilla,” is available on ITunes and at ♫ Girl to Gorilla – Girl to Gorilla. Listen @cdbaby  John is writing more songs and working on a short play, and beginning a novel, which he hopes to share at a future Salon.

Mark your calendar:  December 15 is our IAW&A Christmas Salon co-hosted by Honor Molloy and John Kearns at The Cell at 7 pm. With a party after the salon!