12/18/18 IAW&A Salon: Holiday Classics plus “love, laughter and literature” with The Writing Irish of New York 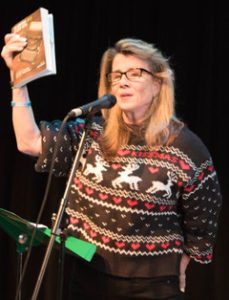 Co-hosts Jenifer Margaret Kelly and John Kearns presided over a night of special Christmas fare, and the launch of a wonderful new book, The Writing Irish of New York, at IAW&A’s December Salon at The Cell. A packed house and a fun afterparty added to the great spirit.

What better way to get in the spirit than opening with the trailer for Angela’s Christmas, the animated version of Frank McCourt’s children’s book, a sweet tale from his mother’s childhood in 1914 Ireland? Narrated by our own Malachy McCourt, it’s on Netflix, and it’s perfect for children of all ages, and bound to become a holiday classic. 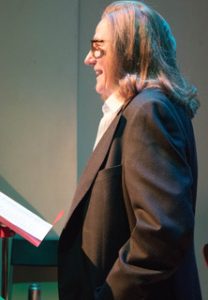 It wouldn’t be an IAWA holiday event without two much loved contributions. Playwright Honor Molloy treated us to her evocation of Dublin’s open-air markets, circa Christmas 1966, “Sixpence the Stars” or “The Little Oranges.”

Treat yourself to Honor’s performance.

And Mark William Butler, playwright and composer, brought the holiday fun with two songs and great singers from his play Ugly Christmas Sweater, The Musical. Kristine Reynal joined Mark in “I’ll Wear Myself” and John Skocik was the virtuous Christmas sweater who only wants “A Chance to Fit In.” 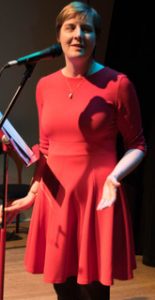 In her first Salon visit, Deputy Consul General of Ireland in New York Eimear Friel made a gracious introduction, quoting the late author Frank Delaney on the Irish love for storytelling. “We love the “story” part of the word “history,” and we love it trimmed out with color and drama, ribbons and bows. Listen to our tunes, observe a Celtic scroll: we always decorate our essence.” 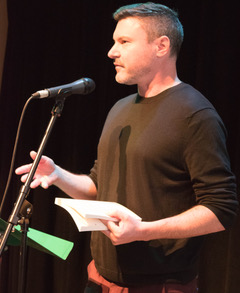 We welcomed an author visiting from Arizona, C.J. Howell, who read from his atmospheric thriller set on Navajo nation, The Hundred Mile View. Find it and his highly praised earlier novel, The Last of the Smoking Bartenders on Amazon. 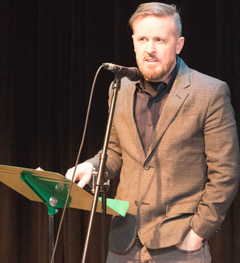 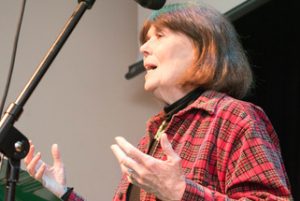 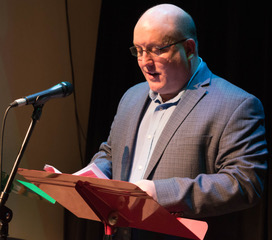 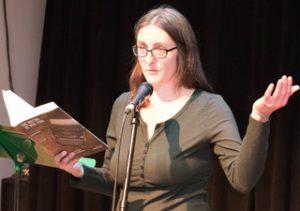 The other celebration of the night was the publication of The Writing Irish of New York. Its editor, the author and filmmaker Colin Broderick, and several of the IAW&A folks in the book described how they found their voices. Colin’s piece “Lucky” tells of his tough journey arriving in a grittier New York with dreams of being of a writer.  Mary Pat Kelly’s correspondence with her idol Martin Scorsese when she was in a Midwest convent led to meeting and eventually working with him.  Daniel James McCabe, playwright of The Flood, told of his family’s long history in New York, and how he’s inspired by their ghosts roaming the streets of NY.  In “Alphabet City,” Larry Kirwan learns to become an observer –and thus a writer— in an after hours joint called the Kiwi Club in the East Village. John Kearns’ excerpt tells how the young scholar from Philadelphia became Irish in the Bronx, and how he has been able to share and explore that passion through IAW&A.  An authentic daughter of Brooklyn, Kathleen Donohoe, author of Ashes of Fiery Weather, claims the title “Brooklyn Writer.”  “I didn’t come to Brooklyn to find my voice. It is my voice.”

For all of their voices and more, buy the book. 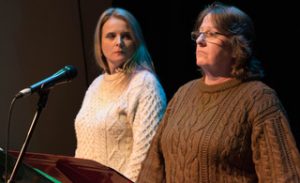 More holiday fun. Maeve Price and Maria Deasy, both accomplished actresses, portrayed sisters up to no good on Christmas Eve in playwright Derek Murphy’s Italian Trousers. Derek’s play Inside Danny’s Box will be staged in the 1st Irish Festival in January.

The charismatic singer Derek Dempsey brought the tunes, with The Pogues’ Christmas classic “Fairytale of New York,” and he debuted his original “Every Christmas.” Catch Derek performing in establishments around Times Square.

Mary Deady, of the exquisite voice, performed another type of Christmas song, “Wexford Carol,” with lyrics written in 1928 from a 12th century melody.

In closing, Malachy McCourt offered his contemporary version of the Nativity story in which there was no room at the Trump hotel for the Holy Family…Commenting on the political landscape of anger and despair, he reminded us that IAW&A is a place to come for “love, laughter, and literature.”  And it surely was tonight.

Happy New Year to all!