12.20.16 IAW&A Salon: Our Holiday Classic: A time for music, gifts, poetry and reflection

The popular Christmas Salon took place on Tuesday, 12/20 in the elegant upstairs space at the Cell. Salon producer and host John Kearns greeted an SRO crowd and welcomed Shane Cahill, Vice Consul General of Ireland in New York. John congratulated IAW&A board member Kathleen Walsh D’Arcy, just back from Ireland where she and Brendan Fay received a 2016 Presidential Distinguished Service Award for the Irish Abroad for their work as the co-chairs of St. Pat’s For All.

Versatile singer Jack Di Monte kicked off the celebration with “The Christmas Song,” universally known by its first words “Chestnuts roasting on an open fire…” Jack gave it a bossa nova feel, and the crowd spontaneously joined him. In a more somber mood, he paid tribute to the great musical performers lost in 2016, choosing to sing Leonard Cohen’s “Anthem.” Calling it a song of hope in opposition to chaos and despair, Jack notes the famous line that alludes to the Liberty Bell, among other things, “There is a crack in everything – that’s how the light gets in.” 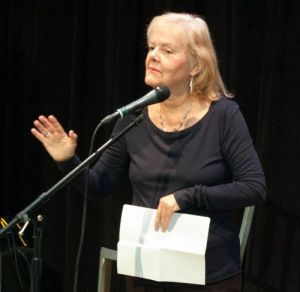 That night, as three, they were at peace.

slipped out the door.

Continuing the nativity theme, Bernadette read two of her own poems.

More poetry, this time in tribute to the Irish poet John Montague, who died recently, was read by writer/ filmmaker of Emerald City, Colin Broderick, together with actor and former Irish boxing champ John Duddy. More about Montague at https://www.poetryfoundation.org/poems-and-poets/poets/detail/john-montague

In honor of the season, IAW&A president Larry Kirwan sang Phil Ochs’ song “Ballad of the Carpenter” and spoke about IAW&A’s role in encouraging artists. In an eloquent reminder of what we stand for, IAW&A Board member and actor Maria Deasy read our mission statement, which includes the sentence. While avoiding party affiliation and endorsing no candidates for public office, IAW&A is outspoken in defense of artistic freedom, human rights and social justice. Find the mission statement in its entirety here: i-am-wa.org/about-us/mission-statement/

This year, we donated to three groups whose work fits with our mission. They are Urban Librarians Unite, a library advocacy and support group,urbanlibrariansunite.org; The Dwelling Place of New York, a transitional residence for homeless women, thedwellingplaceofny.org and Friends of Firefighters, which provides counseling and wellness services to active and retired NYFD members and their families, www.friendsoffirefighters.org 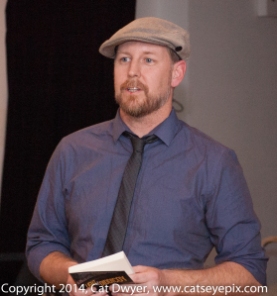 Author Eamon Loingsigh introduced his brand new novel, Exile on Bridge Street, the second book in the Auld Irishtown trilogy, following the well-received Light of the Diddicoy, both pubbed by Three Rooms Press. Then actor Mark Byrne gave a dramatic reading of a section of Exile, which James T. Fisher, author of On the Irish Waterfront, calls “…this gripping tale, soaked in the Irish immigrant dockworker experience and laden with real life legends from a vanished world.” Find Eamon at artofneed.wordpress.com 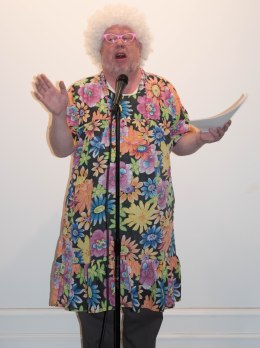 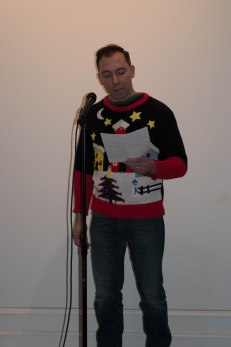 Mark William Butler and company brought the holiday fun with two songs from his play, Ugly Christmas Sweater, The Musical. The amazing Richard Butler as Lulu the evil Christmas Fairy sang “The One and Only Me” and John Skocik brought to life Cazz, the virtuous ugly Christmas sweater with “A Chance to Fit In.”

Author and playwright Honor Molloy’s  vivid reading of her glowing piece “Sixpence the Stars,”fondly known as “Duh Lickle Arrr-anges,”an excerpt from her autobiographical novel Smarty Girl – Dublin Savage, has become an IAW&A Christmas tradition. You can find it here: https://www.youtube.com/watch?v=w1y1jAmgRCEWe hear that Honor’s play, Crackskull Row, will be produced at the Irish Repertory Theatre in the spring. Honor is pictured at left.

We had music and musical collaboration, including the talented cellist Leah Rankin who played “Julie-O” by Mark Summer, and an Irish holiday medley featuring Pachelbel’s “Frolics.”  Singer, songwriter, musician Cathy Maguire sang, “Off to Join the World” by Cowboy Jack Clement.

I’m off to join the world…

Noting that while Malachy McCourt couldn’t join us on Tuesday, it wouldn’t be a holiday Salon without his favorite song, Cathy led us in “Wild Mountain Thyme.” 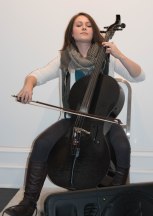 The McCourts were represented by Siobhan McCourt in her first IAW&A reading. Saying that the McCourt brothers were “a hard act to follow,” Siobhan charmed us with “Santa’s Present” by Alphie McCourt, whom we mourned this year. You can find his stories on I-tunes, read by the man himself. 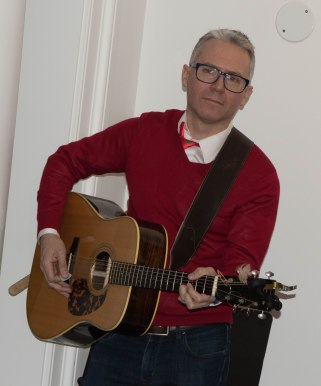 Closing the Salon on a high note, Leah Rankin joined John Munnelly on his composition “Angels’ Tears” and Cathy Maguire joined them for “Happy Christmas” from the CD Together for Christmas, A Contemporary Celtic Christmas Collection. For John’s music, videos and appearances, go to JohnMunnellyMusic.com  John’s also a visual artist whose commemorative #1916 Signatories Portraits are available. For further info, contact him at laughjohnlaugh@gmail.com

Special thanks to our presenters, hosts, members, supporters, committee members, volunteers and the hard-working staff of the Cell for contributing to a fantastic IAW&A year.

Happy New Year!  Mark your calendars for the first Salon of 2017 on Thursday, January 5th at 7pm at Bar Thalia.