12.7.17 IAW&A Salon: We Start the Season with A Salon Rich in Variety & Storytelling

Thanks to Brendan Costello and Maureen Hossbacher for hosting an early December IAW&A Salon that was rich with variety ranging from Irish-born storytellers, a literary scholar and a thrilling performance by Honor Molloy.  Plus, we enjoyed new songs from the wonderful Tara O’Grady, along with fiction and memoir and we marked the start of our holiday season. 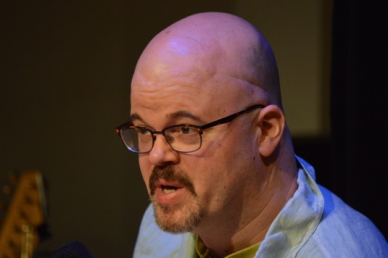 Playwright/poet Jim Cullinane’s story “Lizzie Molloy” depicts a teenager’s crush on a mature woman who seems to him to exude sexuality. The boys in the small Irish town watch the title character go to work at the glue factory, “her hair the color of a wind-blown meadow.” An enthusiastic new member who has written two books, Jim says that, like all stories, there’s a kernel of truth in “Lizzie Molloy.” More at jimcullwriter.com 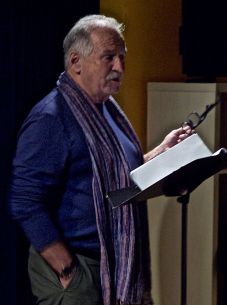 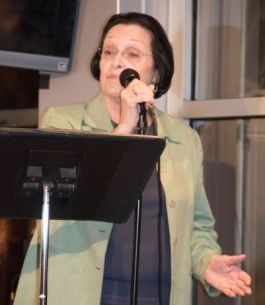 Tara O’Grady joined us to celebrate the release of her 5th CD, Folk Songs: Songs About Real Folks, a collection of original songs in styles that include folk, gospel, rockabilly, swamp pop and swing. “Everybody’s got a story to tell,” says Tara, and tonight she gave us two of them. “Evening Temptations” is dedicated to Tara’s friend, Danish folk musician Mathilde Bondo (Tom Waits also wrote about her in his song “Tom Traubert’s Blues — Waltzing Matilda”). “Vidar the Viking” tells how Tara’s Dublin cousin Joanne met her Norwegian boyfriend Vidar. Tara fashioned that story into a proper old-fashioned Irish drinking song and we gladly sang along. Find out where Tara performs weekly, at www.taraogradymusic.com. 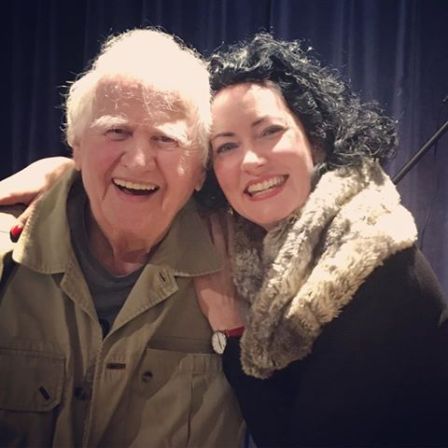 We heard Jonathan Goldman, a Joyce scholar and literature professor at New York Institute of Technology, enthusiastically describe a new book he’s edited for the University Press of Florida, Joyce and the Law. Fifteen scholars contributed essays about the legal issues central to Joyce’s work and life. (He was litigious!) Jonathan is author of Modernism Is the Literature of Celebrity and author/editor of numerous academic works. We also hear he’s a musician.  For the Joycean on your Christmas list, a special price of $40 plus shipping  has been extended until December 15. Use this code  AU1117 and order here: http://upf.com/book.asp?id=9780813054742 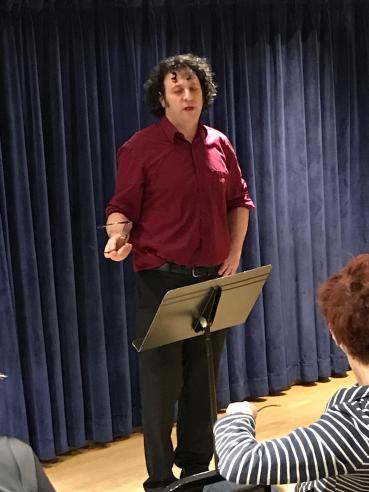 Playwright Honor Molloy (Crackskull Row) declared she was there to “share the new.” And she did with a powerful monologue from her new play Round Room. An actress named Maggie Dubs believes that suicide is the only solution to an unwanted pregnancy in the Ireland of the early 1940s. She’s up on the roof of the Gate Theater, preparing to jump. Honor says, “If you weren’t there, you’ll have to wait for the play to be produced to find out.”

Honor not only “shared the new,” she treated us to her much-loved evocation of Dublin’s open-air markets, circa Christmas 1966, “Sixpence The Stars” (“The Little Oranges”). “Christmas wouldn’t be Christmas without the little oranges,” says a Moore Street Shawlie. And it wouldn’t be an IAWA holiday event without “Sixpence The Stars.”  Treat yourself ttps://www.youtube.com/watch?v=w1y1jAmgRCE 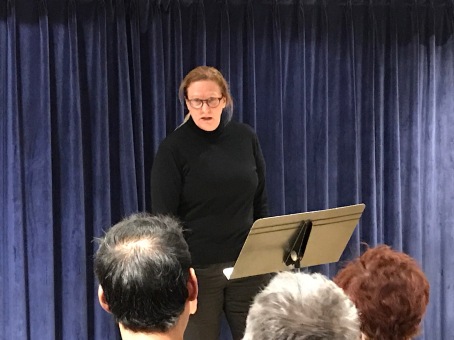 Tom Mahon had two stories to tell. He’s so proud that his daughter-in-law Jessica Cantlon is a Time Magazine Person of Year, The Silence Breakers. A cognitive scientist at the University of Rochester, as is Tom’s son, Bradford, she was an initiator of a lawsuit against the University for ignoring the sexual harassment by a professor in the Neuroscience department.

In Tom’s fiction story “I Voted,” a young immigrant talks about the first American Presidential election he was eligible to vote in. His candidate lost, and a short year later, his children’s health insurance has been cut, and his family’s food stamps slashed. Wondering what will happen next, he realizes that the president reminds him of the dictators of his former country. 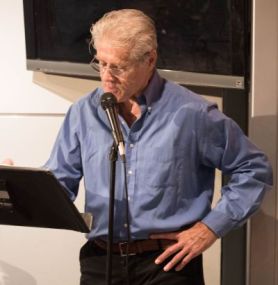 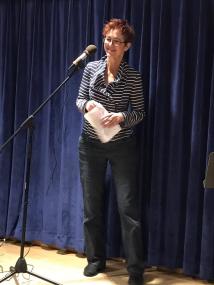 After her Salon debut last month, Karen Bermann returned with a second excerpt, “Either I’ll Kill Myself Or I’ll Eat The Cookies,” from a work about her father, a postwar Jewish émigré who was born in Vienna in 1922. The text was accompanied by Karen’s drawings and watercolors. Karen teaches architecture in Rome during the first half of the year and returns to New York for the second half. A recent IAW&A member, she’ll be sad to miss our events while she’s away, and would love to be in touch. bermannkaren@gmail.com

Gerry Maguire, native of West Cavan, resident of Poughkeepsie told a funny autobiographical short story, set in 1960s rural Ireland. In “The Power of The Office” an elderly man sends a child on quest for a cure for his toothache. His cry for help is answered but not quite in the way he was expecting. Gerry’s work has appeared in the Leitrim Guardian magazine and other newspapers. 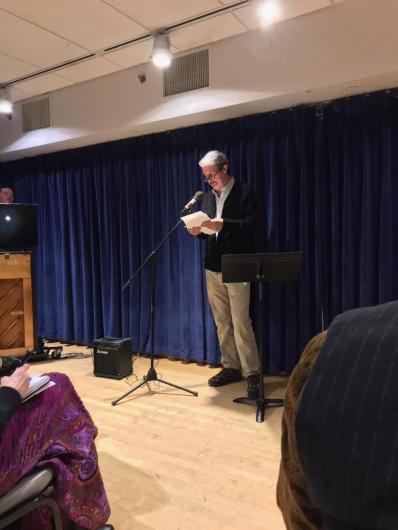 Introduced by Brendan Costello as our “atheist godfather,” Malachy McCourt gave his unique version of the Nativity. He also told how as a poor child in Limerick, he desperately wanted a train set and was always disappointed. There’s a happy ending, as Lionel Trains gave him a gift, in a special presentation, 75 years later. So inspired by that story, the atheist sang “O, Come All Ye Faithful,” thus ending the night on a high note. 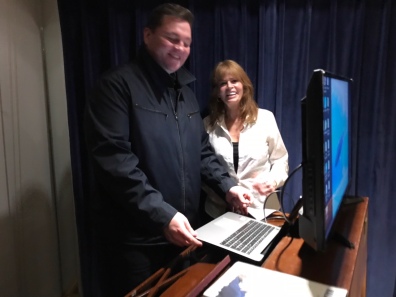