2/4/20 IAW&A SALON: Literature, Music And Kumbaya In The Season Of Love

Playwright, monologist, mellow West-Villager, and our host for the evening, Gordon Gilbert, welcomed the arriving crowd while Matthew Paris lifted spirits with strains of classical and ragtime on the piano. 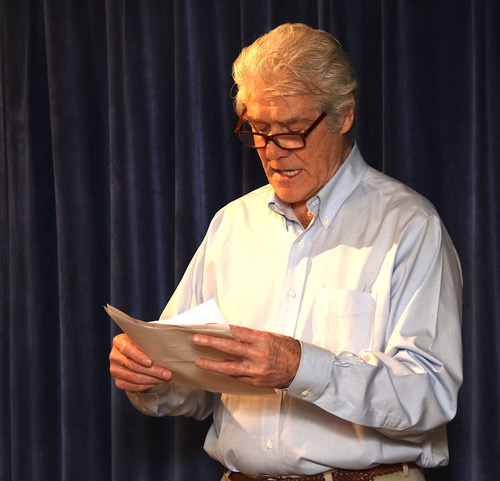 Tom Mahon led off with an amusing story about a New Year’s Eve costume party with the theme of “Horse Thieves, Whores and Sons-a-Bitches.”  One reveler, dressed as a cowboy, is arrested for carrying a loaded (theatrical blanks) weapon in New York City without a license. The police raid the party and arrest everyone.  The upshot of this adventure is that the costume party becomes an annual tradition.

WBAI radio host and celebrity yellow cab driver, John McDonagh, regaled the crowd with a rollicking account of his attempt to secure a spot on “The Moth” radio hour on NPR.  John’s one-man play Off The Meter will be at the New York Irish Center on April 18th and 19th. For more information please go to his website. 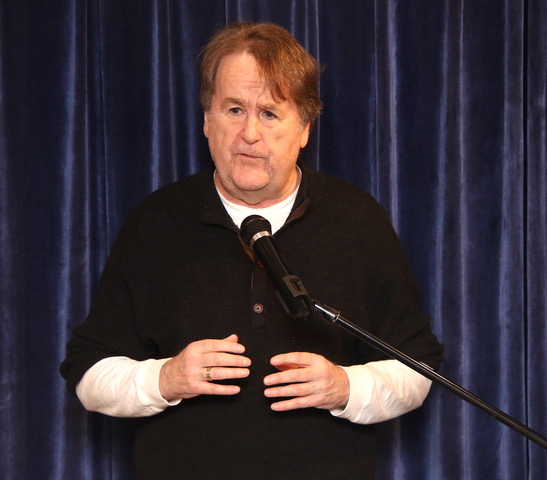 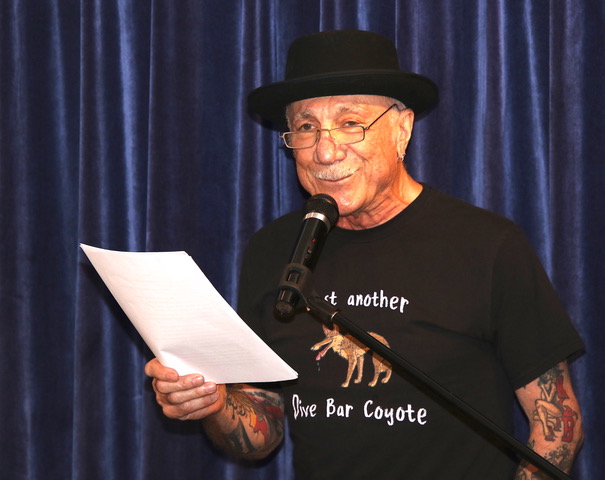 The unique world of East Village dive bars was brought vividly to life by Phillip Giambri who read the story “Darla and the Dungeon” from his new book, The Amorous Adventures of Blondie and Boho: Two East Village Dive Bar Coyotes.  Illustrated by Linda Wulkan, the book pays homage to a neighborhood and its denizens, reluctantly giving way to gentrification.  It’s available on Amazon.

Singer and musician Judy Gorman, whose career includes touring with Pete Seeger and other notables, began with an anecdote about the late, great folksinger:   “Reporters always asked Pete, ‘Can music change the world?,’ and Pete always answered, ‘No, only people can; but sometimes music changes people.’”  Judy then performed “Everybody’s Crying Mercy (But They Don’t Know the Meaning of the Word)” by Mose Allison, and “Harriet Tubman’’ by Walter Robinson. You can catch Judy’s next NYC show at Peoples Voice Cafe on Sat., Feb. 29, 8pm,  40 E. 35th St. (btw Madison & Park). 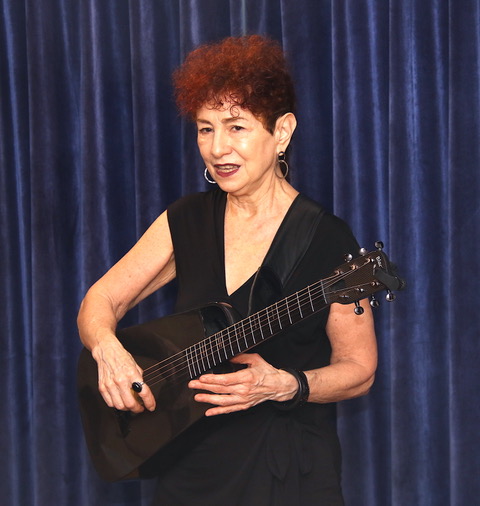 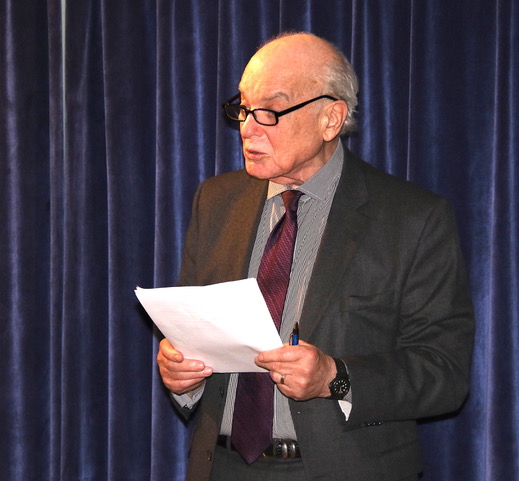 Dr. Alan Goldstein (DDS) made his salon debut with an excerpt from his memoir.  Starting out as a green and playful newly minted Captain in the Army in 1968, Alan soon realizes that the line between being a patriot or traitor was blurry from the Army’s viewpoint.  They react to the peace sign he so carefully mowed in his lawn by sending him to Vietnam. In an unhappy marriage and with a year-old daughter, Alan is tormented as he tries to understand the politics of the period. (An interview of Dr. Goldstein by Ken Burns for his PBS Vietnam documentary is available on YouTube).

The dynamic entertainer, Derek Dempsey, sang two of his original songs, “Empty Spoons (Sam’s Song)” and “The Policy Song.”  Known as the King of Time Square, Derek performs just about every night of the week at several of the best pub venues in the theatre district (for his schedule, please check out his website). He has just completed his first novel, which we expect to hear more about soon. 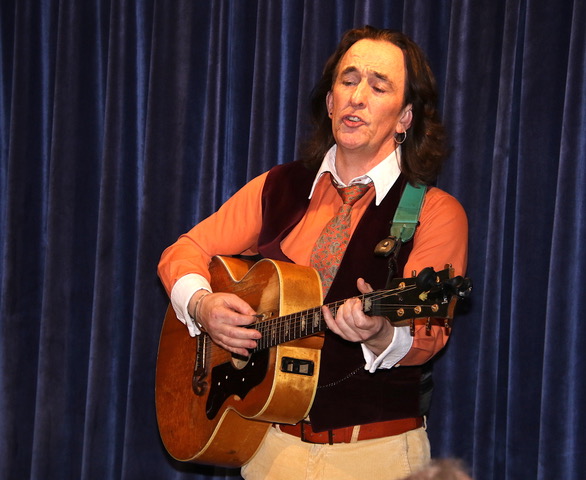 Bert Lee, a man of many talents, started off by reading the prologue from his latest novel, The Spindrift Factor.  The second volume of a trilogy, it’s now available on Amazon.com.  Bert followed that with a brief poem, entitled “Pastoral for a Dirty Sink,” and finished by treating us to an original song from his newly released album Salt for Silver, available from Bandcamp music.  As usual, Bert will be hosting the wonderful open mic at Cowgirl Music, 255 W. 10th Street, on Monday, Feb. 10th and the 24th., 7-11 p.m.

The soft voice of brilliant poet Robert Gibbons, singing “Kumbaya,” wove gently in and out of his first poem, entitled “tell him we are yesterday,” an elegy for slain civil rights worker, James Chaney; the next referenced Aaron Dupuy, the manservant of Henry Clay — both poems especially fitting selections for Black History Month.  Later, noting the enjoyable ambiance of the salon, Gibbons remarked, “I think in light of certain situations that divide us right now, this event tended to unite us as an artistic community” (a sentiment often expressed by presenters at Irish American Writers & Artists). 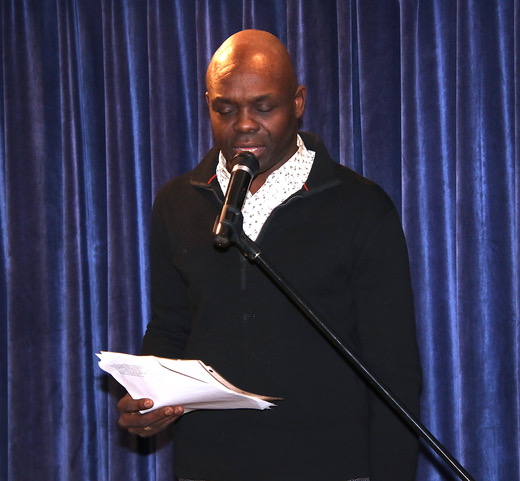 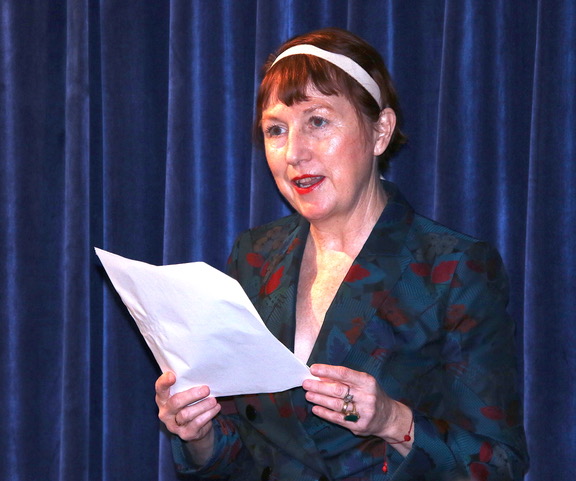 Poet, singer and character actor, Andrea Barnes — familiarly known as “Red” — closed the evening by sharing “The Talisman of Strummer,” a story of mourning and recovery after the loss of her beloved dog.  The talisman, a huge Red Tail Hawk, came to visit, for five hours, outside the window of her Williamsburg apartment: “to remind me I had work to do. I had a calling. I had to dust myself off, heal my heart, participate in life or check out.“   The audio of Red’s newest poem “Moon In Me” was just released on Sound Cloud.

Along with a fresh roster of excellent writers, musicians and actors, our next salon will also feature an interview with Kathleen Donohoe, rising literary star and longtime member of IAW&A, to mark the publication of her second novel, Ghosts of the Missing. Put it on your calendar for Feb. 18, at The Cell theatre, 338 West 23rd Street, 7 p.m. start.