Announcements of newly published work by Mary Pat Kelly, Mary Lannon, and John Kearns wove through presentations by a talented slate of artists at the Irish American Writers and Artists salon at the Thalia held on (a rare) Thursday night. 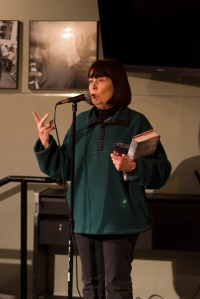 First, Mary Pat Kelly read from her recently published novel Of Irish Blood. Kelly also explained how it started from a long search to find where her family in Ireland was from and led her to placing her character Nora Kelly in the artist enclaves of early 20th century Paris.

After the break Mary Lannon read from her soon-to-be published story “Frank N. Stein.” See www.storymagazine.org The story tells of a young woman’s quest to leave an imagined monster behind her, for those imaginary monsters can be the hardest to shake!

Salon host John Kearns announced that an excerpt from his novel-in-progress, Worlds, called, “Approaching Madison Avenue,” has been published at http://www.dansemacabreonline.com/#!john-kearns/czih.

He then read a brand-new excerpt from the same work. In 1910, the Logan Construction Company is celebrating its 25th anniversary and family patriarch, Seamus Logan (now known as James), is being honored.  The Logans’ eldest son, Sarsfield Logan, S.J., does not attend the ceremony and remains in New York grading final exams.  His brother, Young James, sits in the front row with his mother and seethes about what he considers his Jesuit brother’s phony excuses.

To start off the evening, salon regular and novelist Kevin R. McPartland read a gripping passage from a short story called “Eamon’s Promise.” In the story, McPartland describes the desperate attempt of a fourteen-year old Irish immigrant at attaining work on the construction of the Brooklyn Bridge. 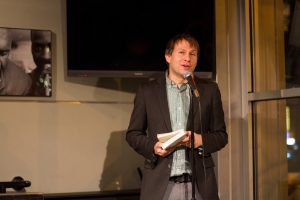 Sean Carlson shared another excerpt from his yet-untitled family memoir, introducing us to the devastating experience of Down syndrome in Ireland during the 1950s. Learn more about his book and subscribe to his email list here: www.seancarlson.net. 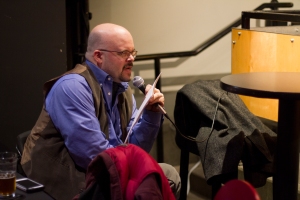 Frequent salon contributor Brendan Costello Jr. changed the pace a bit with a short story he wrote for his nieces and nephew, “After the Horses.”  A continuation of the Humpty Dumpty story, it picks up where the nursery rhyme leaves off, and examines how friendship can help heal even the most broken eggs.  It also addresses the tricky question of whether anyone should trust a doctor who is a duck.

Jack Di Monte sang “Famous Blue Raincoat” by Leonard Cohen, a song written in the form of a haunting letter to an old friend who once stole the heart of the writer’s wife. Despite the heartbreak of his ruined marriage, the writer confesses that the lover actually did his wife some good.  A listener may ponder if it’s a true story for it ends with the line “Sincerely, L. Cohen.” 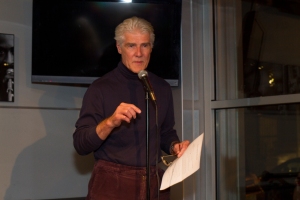 In the second half, Tom Mahon told the story of a middle-aged man who’s dying a slow death from his senseless killing of two young girls when he was young.  Mason Webb then let his step-father convict an innocent 14-year-old African-American boy who died in the electric chair for him (true story) But “The Slow Death of Mason Webb” was Tom’s from his collection Tomorrow Never Came.  Tom-Mahon.com Jeanne D’Brant read a sensual polyphony of steaming jungle adventures and earthy concupiscence from her latest work of nonfiction, FUCKED. 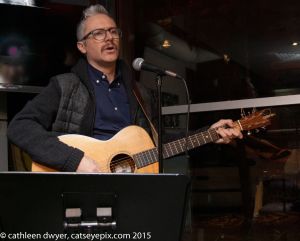 John Munnelly ended the evening on a rousing note with three new songs including one that had the crowd singing along. First, he sang “Cruel Cruel World” inspired by a late 2014 New York Times article about the birth of a child. Next he sang “Only Something Small” originally inspired by Pastor Martin Neimoller’s famous quote that begins. “First, they came for the communists, and I did not speak out because I was not a communist” and ends, “Then they came for me and there was no one left to speak out for me.” To end, Munnelly led the crowd in a partial sing-a-long of “Devil Gets His Due,” a song he recently discovered in his files about his experience at a start-up.

Singer Minnie Dee will perform at an upcoming salon