2/3/16 IAW&A Salon: Postcards, Sheep, Faeries, and Something for Everyone

It was business as usual at the Irish American Writers & Artists Salon at Bar Thalia on Tuesday February 3rd, when the topics included postcards, sheep, Celtic faeries, dunce caps, James Dean, St. Grace’s Day, finger snapping, and the inherent humor of male genitalia – a little something for everyone, as it were.

John Kearns got things rolling by introducing special guest Andrew Byrne, the Artistic Director of Symphony Space, who dropped by to say hello and offer words of encouragement to the IAW&A, which he called “a member of the Symphony Space family.”

John then read an excerpt from his novel in progress, Worlds, about Seamus Logan’s arrival in the New World in the late 19th century.  Wandering the streets of Lower Manhattan after getting off of the boat at South Street Seaport, Seamus finds his way to Saint James’s Church near Chatham Square.  After saying a few decades of the rosary, Seamus meets the church’s cleaning lady who is also from Mayo, tells her his name is James, and accepts a room in her nearby boarding house. 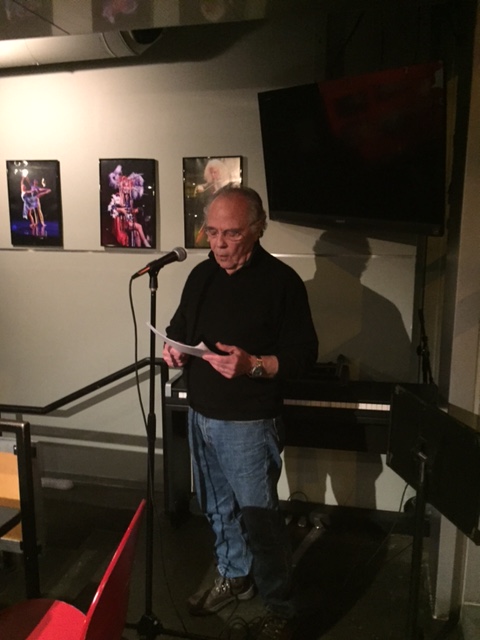 Ray Lindie was up next, reading from his new play, Jimmy Dean’s Alive. The lead character, James, is enamored of James Dean, and often thinks of himself as Dean, an escape mechanism he uses to separate himself from the three women he is forced to live with: his mother, her lover (a large masculine southern lesbian), and her new found friend, a young pregnant Irish Au-Pair. As Ray so devilishly put it; “Let the games begin.”

Rosina Fernhof then performed a monologue from Synge’s most beautiful play, “Riders to the Sea,” which is the story of a mother who has seen all of her sons swallowed by the sea. “They are all together now,” she laments. “The end has come.”  Tinged with bitterness but final acceptance, the monologue reflects the life of this Irish woman.

Board member Sean Carlson shared a short story about an airport without postcards as an introduction to an essay he wrote about one of his childhood favorites (Rush Hour – Ireland) and a car-travel game it provoked. One attendee tweeted her favorite line about “traffic woes that do not implicate sheep,” and plenty of discussion followed at the bar afterwards about other memories of postcards and the past. Sean also took the opportunity to introduce a new form — available at http://bit.ly/IASalon — for anybody interested in reading or performing at future Salons. 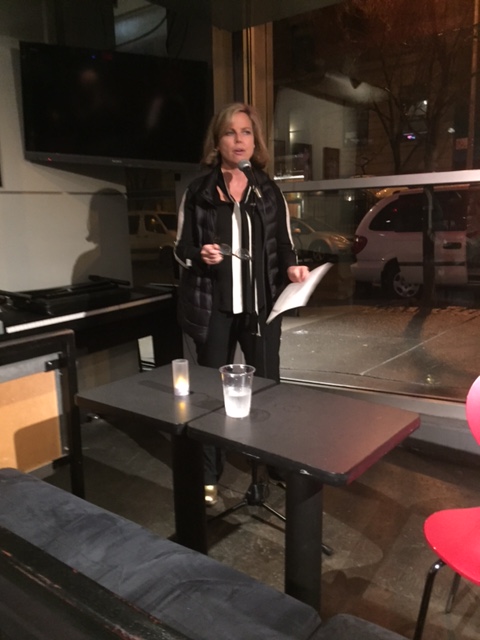 Fellow board member and fearless comedian Sarah Fearon then wrapped up the first half of the evening by trying a first draft of some new comedic material. Focusing on people who drive us crazy – ranging from those who use the phrase “Full Disclosure” inappropriately to those we should be intolerant of for their intolerances – and some who narrate every train of thought they have at the expense of our sanity. Also on tap were a few inventions for an APP and a new GPS system to improve our lives. Sarah promises that her train of thought will be continued. We hope so.

After the break, and the inevitable beverages, Mr. Kearns continued the proceedings with a reminder about the St. Pat’s for All Parade fundraiser, to be held at the Irish Arts Center on Friday, March 4th from 6-10pm. The event includes a reception, music, and some literary shenanigans, with an appearance by the man himself, the legendary Malachy McCourt. Enjoy some great food at a great show for a great cause! 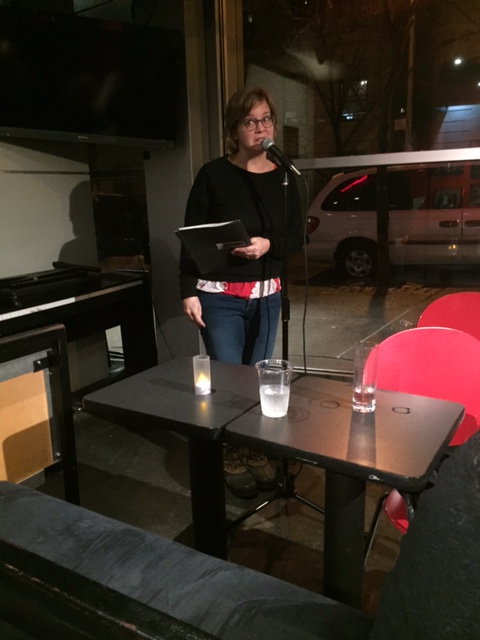 Marcia Loughran then delighted the crowd with her poetry, reading three pieces that all had a winter theme, and succeeded in warming up the room. 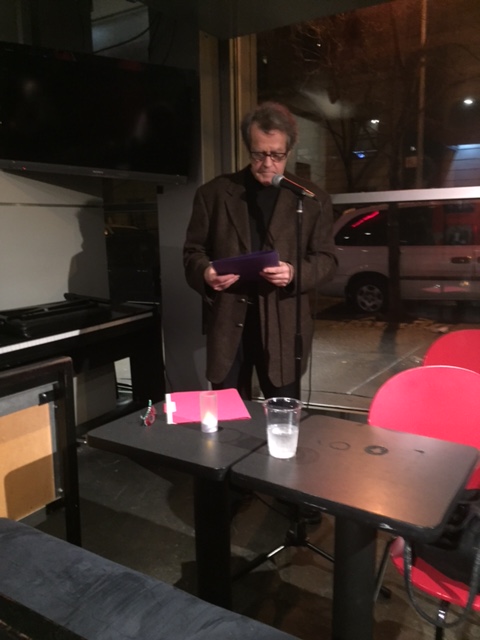 Gordon Gilbert, Jr. then shared a monologue based on an interview with Dr. Raymond Barfield, in which the doctor discussed children, cancer, and death. The interview appeared in the January 2016 issue of the literary magazine The Sun. He followed that up with a second monologue, “Dick”, which is part of a play Gordon himself wrote called Monologues from the Old Folks Home. The character is a World War Two veteran who chose to reside at the rest home called, “Serendipity” instead of a V.A. home, because of the larger number of women there. Most of the monologue is about his good relationship with his, well, “dick”.

Newcomer Mark Tompkins then read from his Irish-themed debut novel, The Last Days of Magic. The novel is being published by Penguin Random House on March 1st and his official book tour concludes at the April 7th IAW&A salon. The Last Days of Magic is an epic novel of magic and mysticism, Celts and traitorous faeries, mad kings and exorcists, and a broken Goddess struggling to reign over magic’s last outpost – medieval Ireland.

Salon regular Jack DiMonte then treated us to a Jimmy Buffett song, “He Went To Paris”, which encapsulates one man’s story from youth in Paris to old age in Florida.  In a few minutes it has the impact of a sweeping biography as it carries the listener through the emotional highs and lows of its unnamed protagonist, hurdling across the eras of his life. 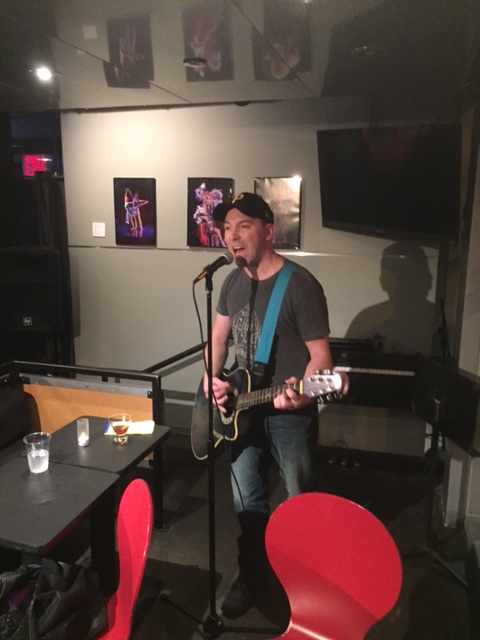 Closing out the show was the dynamic John Paul Skocik, who returned with three songs: “One In a Million”, piece about youth and it’s impending end; “Alien” a pretty tune (though lyrically misanthropic, as it asks why should we deal with the problems of others when we don’t want to deal with our own); and lastly “California Time,” the tale of a New York man-about-town engaging in a catch-up phone conversation with an ex currently on the west coast, only to realize (too late, of course) that he wishes that he was also in California. John continues to write but has not performed a live show in some time, something he plans to remedy soon. In the meantime, we’re always happy to have him jam with us.

We’ll see you next time – in this case on Tuesday, February 16th (7pm) at The Cell Theatre – which promises to be another celebration of words, music, and occasional nonsense.