That’s how poet Marcia B. Loughran summed up the mid-March IAW&A Salon at the Cell, a night of dynamic performances, innovative music and an enthusiastic full house.

Playing his ukulele, the teenager Ian McCourt lead off that stellar music with two original songs  “Burn You” and “Been There.” 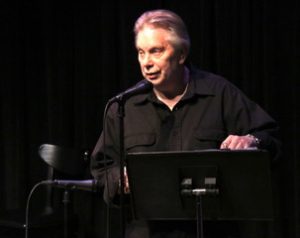 Warning that we were in for a rough ride, crime fiction writer Gary Cahill delivered the chilling opener to his novel in-the-works, Bird On the Water. In Gary’s words: “An out-of-control NYPD captain leaves a tableau of horror and death on a sunshiny NYC West Side street and believes he’ll walk away clean?”  Fasten your seatbelts for this one. 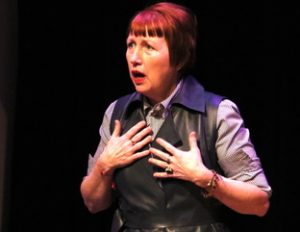 In her second Salon appearance, actor/singer Andrea Barnes a/k/a Red described working as a server in a 4-star Michelin restaurant, where she notes, The Guest is God. When one guest asked her for a smile, she chose to “Rake Rocks in Kyoto” on the restaurant floor, in an effort to attain perfect service and avoid an existential crisis. In a beautiful moment, she sang the John Mayer song, “Gravity” in tribute to her friend, the late Anthony Bourdain. 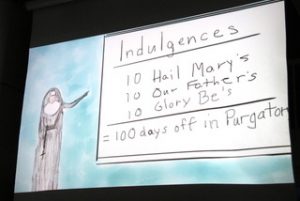 A Slide from her Video Memoir

Kathleen O’Sullivan wrote, illustrated and narrated a video memoir, The Irish of Isham Street, her story of growing up Irish-Catholic in NYC. She showed a chapter “The Church,” that some of us of can relate to. A young girl tries to make sense of what the nuns and priests have taught her about Heaven and Hell. Terrified that she’s a sinner who will burn in Hell, she strategizes about how to get to Heaven. 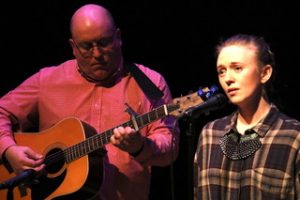 Annalisa Chamberlin, accompanied on acoustic guitar by Salon producer and host John Kearns, sang two songs in her lovely pure voice: the sweetly sorrowful “The West Coast of Clare” by Andy Irvine of Planxty, and a rendition of U2’s “I Still Haven’t Found What I’m Looking For.” 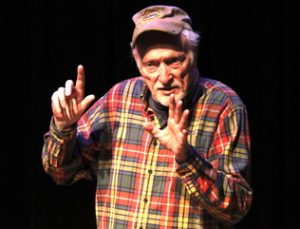 In full throttle “character actor” mode, Thom Molyneaux performed part of an epic monologue from Ben Clawson’s black comedy, Omnivores. Tom calls it a “horrific and hilarious tale of an unhinged hunter’s struggles with the deer he killed that wouldn’t stay dead.”  And Tom’s performance killed. Annalisa Chamberlin will perform a scene from Thom’s latest play Kilmainham, at the 4/16 Salon at The Cell.

Marcia B. Loughran treated us to a poem about spring, “What We Wait for by the Window in Winter” because some day it will come. Her poems “Momentary Sighting,” for her husband and  “Leaving the Table” the first in a series of poems on losing her mother evoked great feeling. Notes Marcia: “The Salon crowd did what it does best and gave warm support and comfort!” 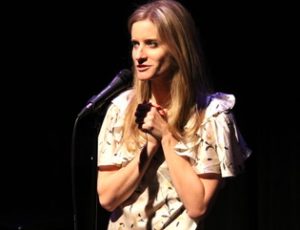 In writer/director Dan Brown’s latest monologue, “To Those Who Have Loved,” Rebekah Madebach plays a woman deeply in love with a man who doesn’t know she exists. In a stunning performance, Rebekah’s character progresses from funny and high-spirited to a disturbing portrayal of a woman with a loose grip on reality. 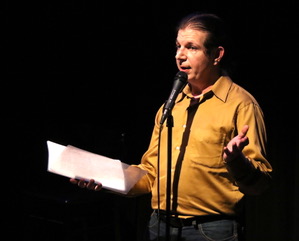 Alan Gary’s “exotic tales of growing up in Flatbush Brooklyn” include some poignant essays. In “Numbers,” an elderly man with a number tattooed on his arm intrigues the boy. The Holocaust survivor taught him to play dominoes and “never forget, always to love.” Another piece evoked Alan’s mother’s brave final days. 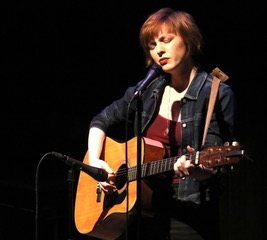 Salon first timer Case Watson performed “Vampire Sky” and “Fall You in Love” from her breakout EP, the banshee. Described by Pop Dust as “haunting, ethereal music,” the banshee is available to stream and purchase on all major streaming services.

And for more on Case please visit her website.