That’s a recipe for a stimulating IAW&A Salon at The Cell. Even post-St. Pat’s, there’s no let-up in talent or audience enthusiasm. We were particularly happy to welcome two new presenters, Meredith Trede and Freddie White and to hear a fine tribute to Jimmy Breslin.

Gary Cahill opened the evening with his short-short story “Responsorial” — a taut, edgy, dark tale of Irish-American revenge for a decades-old IRA killing, and the sorrow that lived on in a Hell’s Kitchen denizen’s broken heart. Gary is a member of the Mystery Writers of America New York Chapter and International Thriller Writers. Catch Gary reading from his crime novel-in-progress on Saturday, April 15th at 7:00 pm at the KGB Bar, 85 E. 4th Street.

Brent Shearer, who says he’s now a “blaggard living on the lower West Side,” started out as a reporter for a local New Jersey newspaper, where he became smitten with the great journalist Jimmy Breslin. Brent read a fine essay about Breslin who died last week. As Jimmy put it in his last column, “Thanks for the use of the hall.” 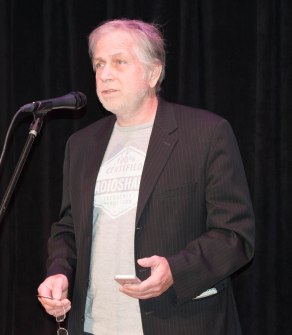 In her first Salon visit, Meredith Trede read from her recent collection of poems, “Tenement Threnody” poems in voices from Inwood, her childhood New York City neighborhood. Called “wonderfully evocative persona poems of Irish-American tenement life,” they are the latest in her prize-winning body of work. Find it at www.meredithtrede.com.  Meredith “appreciated the friendliness and enthusiasm” of Salon goers.

We benefitted from Marcia Loughran’s recent Lenten vow to try to produce a poem a day. She read two of her resulting poems “Birds, Trains, Birds” and “Take Two” in which she reminisced about going to movies with her father. Marcia also shared her signature “messay” or mini essay, about the journey of her stolen credit card. Her chapbook, “Still Life with Weather” said to be “full of music” is available at https://www.amazon.com/Still-Life-Weather-Marcia-Loughran/dp/1539481182/ref=asap_bc?ie=UTF8

John Kearns, pictured at right,  read a short scene from his play, Sons of Molly Maguire. Mine owner and prosecutor Franklin B. Gowen declares that the accused Molly Maguires have offended the majesty of the law, stand in the way of progress, and must be hanged as an example to others. When undercover detective James McParland enters, he tells Gowen that he shares his goals and is disgusted that the Molly Maguires call themselves Irishmen. We’re happy to announce that our Salon producer and host’s play will be staged in Dublin in May. https://www.facebook.com/events/1669973526629814/

In Thom Molyneaux’s Tennessee’s Waltz, Stanley Kowalski meets Blanche DuBois some years after Streetcar Named Desire. The result was a scene that was serious, funny and mysterious. Jack DiMonte and Guenevere Donohue brought Stanley and Blanche to vivid life. 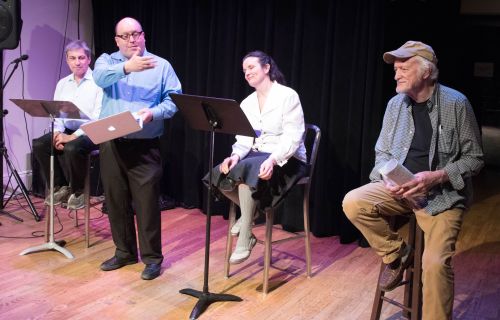 Poet, playwright and man about Greenwich Village, Gordon Gilbert, Jr. read the lyrics to a song he created in the style of Bob Dylan, “When Her World Caught Fire.” He followed with a short love poem, “Forever In-Between” and a light-hearted piece titled “An Old Lover Stays Over.” Gordon, pictured at left also hosts spoken word events at the Cornelia Street Café. 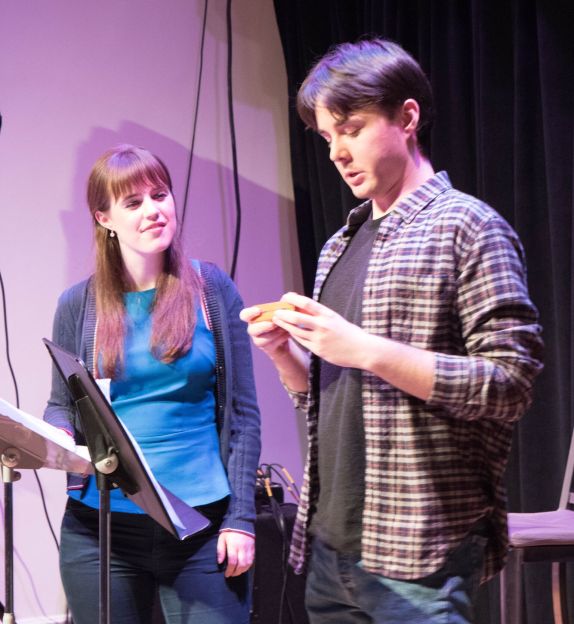 Guenevere Donohue’s original song “The Spirit Rises” is her soulful take on the spirit of rebellion, and the positive effects of self-sacrifice, challenge, and change.

Speaking of soulful, Cork-born musician Freddie White has been a vital part of Ireland’s music scene since the 1970s and has been recognized throughout the world for his multiple talents. Tonight he sang two original songs form his recent CD “Prodigal Songs.” Freddie’s exquisite rendition of “The Parting Glass” was a perfect end to our evening.

See you next time, Thursday, April 6, 7 pm at Bar Thalia.