The art of storytelling was front and center this evening, as “graduates” of Malachy McCourt’s “Tell the Feckin’ Story” Master Class demonstrated their talents.  The master himself was on hand to co-host the proceedings with his daughter Siobhan McCourt, a Board member of Irish American Writers & Artists, Inc.

Regular presenter Gordon Gilbert got the evening off to a comical start, aided by a prop phone with multiple lines. As a man, on his birthday, awaiting calls from family & friends, he instead ends up juggling multiple scam callers asking for donations or phishing for his SS#.  Gilbert’s 2nd monologue was a fictional account of a macabre fishing trip in 1996, a few weeks after TWA Flight 800 went down off the south shore of Long Island.

Playwright Sheila Walsh, used the tools she learned in McCourt’s workshop to hone her pitch for a production of her play Mr. Tweedy’s Neighbors.  Her synopsis of the plot led the audience up to a cliffhanger moment and the final tease:  “Would you like to know what happened”?  To the audience’s emphatic “Yes!” she answered, “Good!  You should see my play”!  Walsh recently presented a successful evening of her one-acts, and we look forward to the launch of the full-length Mr. Tweedy’s Neighbors in the not too distant future.

Nancy Oda, whose thespian skills have often entertained at IAW&A, this time read a piece from a collection of essays in progress, which deals with a Chicagoan’s impressions of New York City. The amusing topic concerned the peculiar penchant of New Yorkers to get their morning cup of joe outside, rather than make it at home, which triggered the perplexed Chicagoan’s query:   “How do you rouse yourself — without coffee — to go out and get coffee?”

Frequent presenter and Obi winning actor Rosina Fernhoff tackled the challenging role of Hecuba from Euripedes’ Trojan Women.  Having lost everything — her beloved Troy, her children, her husband — Hecuba wants to know what will become of her.  What will she be asked to do by her captors? She grieves for her city Troy, for the life she once lived and the lives she has lost in the war. Fernhoff’s moving monologue evoked the grief of all women in war.

For a change of pace, next up was singer/songwriter /guitarist Mike Glick with a humorous ditty, inspired by our Fabricator-in-Chief, entitled”Alternative Facts.”  It was followed by an engaging musical version of Langston Hughes’ lovely poem “Daybreak in Alabama.” Though solo for this performance, Mike is one half of a duo, with his son Aleksi Glick, known as Generations.  Check out their Facebook page for upcoming gigs. 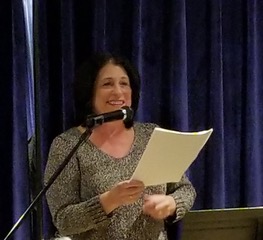 IAW&A welcomed first-time presenter Barbara Fischkin, who read from her award-wining novel-in-progress, The Digger Resistance. The novel charts the course of a friendship between an American-born newspaper reporter  — mother of a son with severe, nonverbal autism — and an elderly, eccentric and mute Holocaust survivor. The excerpt focused on a Gestapo wife whose disabled toddler is killed as part of the Nazi “euthanasia,” of the disabled, and also introduces a character based on the Irish writer Henry Francis Montgomery Stuart, who spent time in Nazi Germany.  A recipient of the Livingston Award for International Reporting, Fischkin has reported from Ireland and N. Ireland and is married to Jim Mulvaney, a journalist well known in the Irish-American community.  They are the parents of two grown sons. One has nonverbal autism. The other is a special education teacher in a Harlem public school. For more of Barbara’s impressive resume see her website or follow her on LinkedIn. 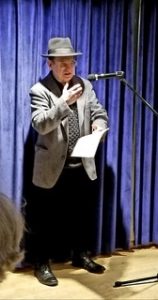 A photo of a woman aboard the 80-year-old museum subway train, run by the MTA during each holiday season, inspired W. J. Wanczyk’s mystery novel-in-progress, The One Across the Aisle.  Jay read the first chapter in which two strangers, a man and a woman sitting opposite each other on a train, ruminate on who the other might be. He envisions the book as the first in a trilogy of mysteries set in NYC during 1947.  Jay has been a member of IAW&A for about five years and noted that when he attended his first IAW&A event, the Eugene O’Neill Awards Dinner honoring Patricia Harty, he walked into a room of over 200 strangers and three hours later he left the room with over 200 new friends. 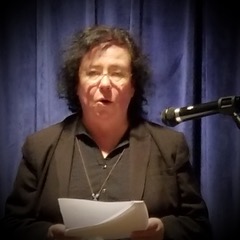 Illustrating the axiom that no good deed goes unpunished, Kate Gill offered the saga of Fluffy, a 13-year old, huge Maine Coon cat she adopted while her judgment was impaired by the recent demise of her cat, Tom.  Her account of Fluffy’s challenging disposition and idiosyncrasies had the audience hooting with laughter.  Though a long-time IAW&A member, this was Kate’s debut presentation and we can’t wait for the next. Also a member of the Dramatists Guild, her plays have been produced in NYC and CT.  One of her short plays will be presented in the DGPG’s Festival on April 9th at the Players Club. 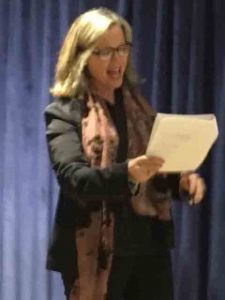 The laughs kept coming, when comedian/playwright/actress Sarah Fearon stepped up to deliver a taste of her hilarious play 2B.  Written & performed by Sarah and directed by Lizzie Donahue, you can soon see it at The Players Theatre Loft, 115 MacDougal St., Thursdays – Sundays April 25 – May 12. A Board member of IAW&A, Fearon is also an active member of Rockaway Artists Alliance.

Finally, Malachy McCourt, stage & screen actor, writer, raconteur, radio personality, founder of IAW&A, and ubiquitous man about town sang us out with a lively tune implausibly titled “I Don’t Work for a Living.”