The first March IAW&A Salon saw the return of some old friends, featured stories with breathless endings and a few comments on the sorry state of presidential politics. Our new night at Bar Thalia, the first Thursday of the month, allowed for a relaxed atmosphere and general good cheer in the run-up to St. Patrick’s Day.

Host John Kearns announced that IAW&A has been recognized as “Organization of the Year” by the Irish American Heritage & Culture Committee of the NYC Department of Education. The award will be presented on Friday, March 11, at 5pm at Brooklyn Borough Hall Courtroom at 209 Joralemon Street. We’re delighted that our group, barely eight years old, has been so honored.

IAW&A Salon regular, novelist and short story writer Kevin R. McPartland kicked off the program with a continuation of his zany short story “The Cruise.” In the piece, an old school New Yorker finds himself on a cruise with a group of drunk magicians. A surprise ending, coupled with Kevin’s delivery, delighted the crowd.

We welcomed the return of Eamon Loingsigh, who read from Exile on Bridge Street, the second novel of his Auld Irishtown trilogy, following the acclaimed The Light of the Diddicoy. In Exile, teenage Irish immigrant Liam Garrity struggles to adulthood in early 1900s Brooklyn, while back home, Ireland’s fight for independence erupts with the 1916 Easter Rising. We’ll hear more about Exile on Bridge Street near its pub date, scheduled for October.

Frequent Salon contributor, author, teacher and dancer, Maura Mulligan gave an account of a recent visit to her sister’s grave at Gate of Heaven Cemetery in Hawthorn, NY in “The Search for Mag.” She died of a stroke at a young age many years ago, leaving Maura heartbroken. At her gravesite, Maura tenderly reminisces about their childhood and updates Mag on events in her life. Maura dedicated her memoir, Call of the Lark to her. www.mauramulligan.com 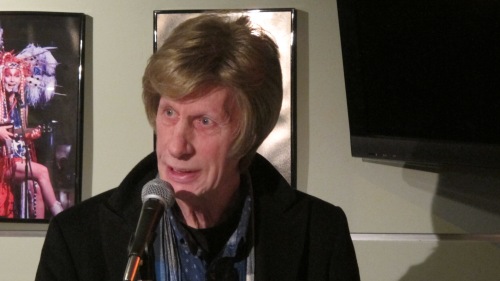 John Anthony Brennan’s first book, Don’t Die with Regrets, won the prestigious 2015 “Next Generation Indie Book Award.” His second, The Journey: A Nomad Reflects was published in October 2015. Tonight, with his Armagh tones, he gave life to three poems: “The Rhythm of Time” by Bobby Sands, “Requiem for the Croppies” by Seamus Heaney, and John’s own composition “The Singing Bones.”

Jim Callaghan’s “New York Values” offered a powerful rebuke to Ted Cruz’s famous insult. He argued that we New Yorkers know exactly what Cruz meant— the various ethnic and religious groups and so many others that make New York work. Jim described how New York led the way, long before the Bill of Rights, in establishing freedom of speech (1734), freedom of religion (1707) and later in women’s rights at the Seneca Falls convention (1848). Jim concluded, “Despite our reputation as a contentious lot, we get along by being respectful and in keeping the immigrant dream alive for those who came before us and who still see New York as the place to fulfill their dreams.”

In another nod to the political season at hand and the imminent Ides of March, Jack Di Monte delivered an excerpt from Shakespeare’s Julius Caesar. Jack showed another of his many talents with his portrayal of Cassius’ first overture to Brutus as he tested his tolerance of the emperor’s arrogant power-grab. 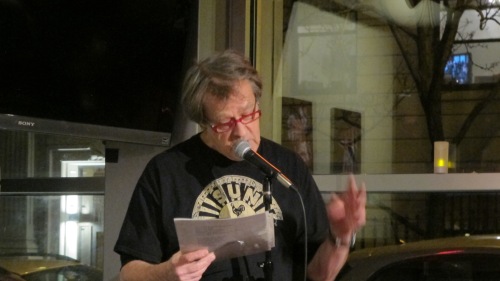 Gordon A. Gilbert is re-working the script for his play, Monologues from the Old Folks Home, and plans to produce it for the 7th time this spring. He performed monologues from the play, including a sharp piece about outsourcing the duties of attending to a loved one’s death. 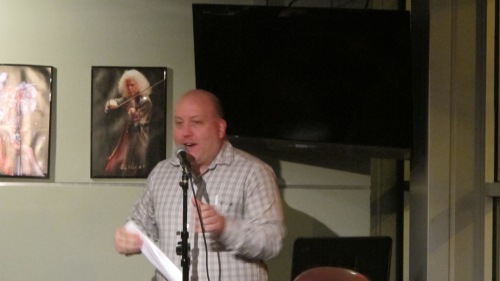 John Kearns dedicated his reading to Kathleen Walsh D’Arcy and Brendan Fay whose long struggle has finally helped make the St. Patrick’s Day Parade more inclusive. To that end, he chose monologues from his play, In the Wilderness, about a South Bronx Catholic girls’ school in the 1980s. In the monologues, teachers and students give their perspectives on the myth of Sisyphus who was condemned for all eternity to push a boulder to the top of a mountain, only to have it roll down again

Brent Shearer presented a short story in the voice of an addled woman from Queens, a communicant at St. Joan of Arc parish. Brent claims that he “publishes short things in obscure places.” inthefrontrowonthedole.blogspot.com

Thom Molyneaux is an actor, director, playwright and a semi-regular at our IAW&A Salons. Tonight he read his timely new short play, White Cop/Black Kid in public for the first time. Thom was thrilled by the audience reaction, “…better than he even dreamed and wished for…”

His experience reminds him how valuable the attentive IAW&A Salon is for himself and other artists. 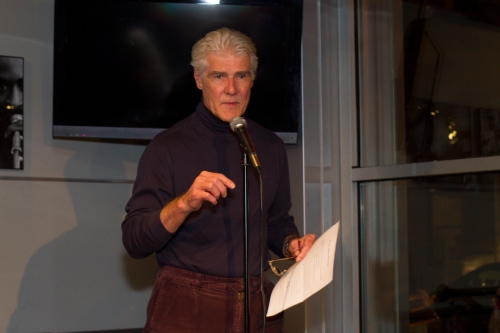 Tom Mahon has been reading from his collection of vignettes called Delusions. Tonight he read “A Cosby” with his usual dramatic flair.

Multi-talented Guenevere Donohue performed an excerpt of her solo show, Killer Is My Name. This section featured a snowy Sunday, uncovered secret poetry and Guen’s original composition, “The Evolution Song.”

No one tells it like Malachy McCourt, and he closed our night with his unadulterated opinions on the recent death of Antonin Scalia, on other political figures, on St. Patrick, and closed with the soulful “The Foggy Dew.”