4/16/19 IAW&A Salon: Theatrical Salon Lights Up the Stage at the cell 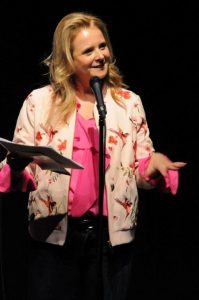 The April 16th Irish American Writers and Artists Salon brought a whirlwind of stellar performances to the stage at the cell theatre. The evening was curated by IAW&A VP Maria Deasy, who brought her extensive experience as an actor, playwright and producer to bear and produced an engaging lineup of talent. The “Second Annual Salon for the Theatrically Inclined and Those Who Love Them” featured stellar performances and great writing that ran the gamut from high comedy to profound tragedy. For more information on Maria please visit her website. 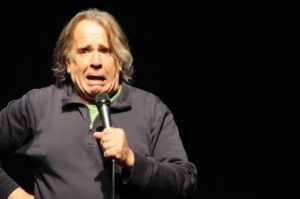 Comedian Danny McWilliams started off with an energetic, rapid-fire set reminiscent of a modern-day Lenny Bruce, if Lenny were Irish, gay and from the Upper West Side. Danny’s the host of Suddenly Stand Up, an open mic every Wednesday at The Duplex Piano Bar in Greenwich Village. He is also an actor at The Gallery Players in Brooklyn and at Manhattan Repertory Theatre in New York. 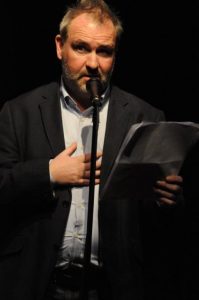 John Breen read a touching excerpt from his new play, “Maisie’s Appendix,” with a performance that captivated the full house. Though he is now based in New York, John Breen was Artistic Director of Second Age Theatre Company in Dublin until April of 2014. He is best known as the writer/ director of the hit play “Alone it Stands,” which tells the story of Munster’s victory over the All Blacks in 1978, and he was awarded the Irish Times/ESB Theatre Award in February 2000 for Best Director for his direction of his own play. 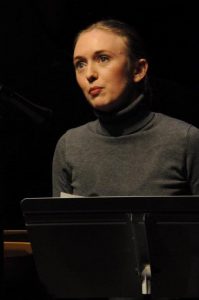 Frequent salon presenter Thom Molyneaux debuted work from his new play “Kilmainham,” where seven women recount the story of the Easter Rising, the War of Independence and the Civil War in direct, personal, authentic voices. Actress Annalisa Chamberlin brought the character of Grace Plunkett to life, recreating her final moments with passion and pathos. In addition to numerous stage and screen credits (and frequent musical and theatrical contributions to our Salons), Annalisa is a resident artist at The Cry Havoc Company. 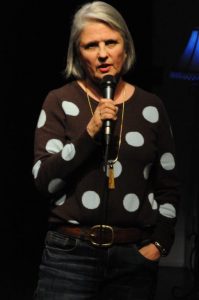 Lenore Skomal has seemingly done it all — author, playwright, journalist, and producer, including the Broadway Bound Theatre Festival, which will have its 3rd season at Theatre Row Studios in August. She is also launching an Off Broadway run of her comedy THE EXES at Theatre Row on 42nd Street in August 2019. Lenore talked about her extensive and varied career, framing every unlikely turn as a matter of asking herself “How hard can that be?” She demonstrated her dedication to empowering artists with her inspiring talk, leaving the assembled crowd feeling energized and confident about their own potential. For more information on her extensive career, please visit Lenore’s website.

The second act started with another comedian, Shecky Beagleman (O’Beagleman?) whose hilarious accounts of abstract attractions in dreams and encountering some dudes in Washington Square Park smoking “Opie-um” had the crowd in stitches. She has also produced an award winning podcast called “False Positive” for Little Water Radio in Manhattan’s Seaport and currently appears as Ronnie The Limo Driver’s Mom on The Howard Stern Show. 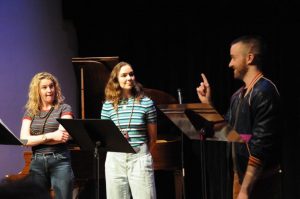 Playwright Derek Murphy is an IAW&A Salon success story — he developed his plays “Inside Danny’s Box” and “Dyin for It” at the salons which he produced with Maria Deasy at Origin’s 1st Irish Festival in 2018 and 2019. They received 8 nominations and 2 wins between them. His latest play, the dark and hilarious “A Very Irish Killing,” was performed by actors Daniel Holme, Aimée Louise O’Sullivan and Aoife Williamson, each of whom has performed in other Derek Murphy plays, in addition to their many other credits. 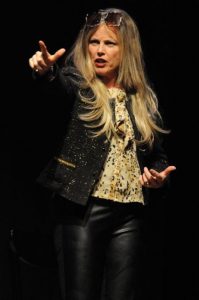 IAW&A Board member Sarah Fearon’s latest creation is Sally Apthorp-Belvedere. In a mad world of let’s make a deal, Sally puts the “real” in real estate. When we meet her, she’s in the home stretch of a big deal; in the scene Sarah performed, Sally’s lost phone is a near-existential crisis that lends an air of desperation to her comedic observations and quips. 2B, Sarah’s play featuring Sally Apthorp-Belvedere, is funny in a you-can’t-make-this-stuff-up kind of way. (Well, maybe a little.) Written & performed by Sarah and directed by Lizzie Donahue, the play is running through May 12th (with a special IAWA post-show talkback on April 27th); Thursday-Sat 7PM and Sunday 3PM at The Players Theatre, 115 MacDougal Street, in the Steve and Marie Sgouros Theatre on the 3rd floor.

Heres a link specifically including an IAW&A discount! 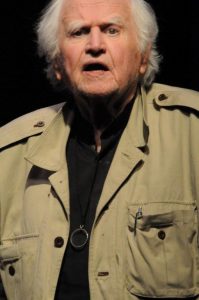 Our “Pater Actorius,” Mr. Malachy McCourt, closed out the evening with a reading from “Mass Appeal” by Bill C. Davis. As he has so often in his career, Malachy channeled the character of a priest in a way that only a devout atheist, and a formidably accomplished actor, can, and in the character of “Father Tim Farley” provided an appropriately ironic benediction for another great Salon.

Our next Salon event will be on Tuesday, May 7th at 7:00pm at Thalia Theater rehearsal room at Symphony Space, 95th St. and Broadway.