On April 19, 2016, we marked the 100th anniversary of the 1916 Easter Rising IAW&A style — with a rousing, often affecting night of poetry, song, drama and story. John Kearns curated and hosted the Salon dedicated to the centenary at The Cell Theatre.

We were especially honored to welcome Barbara Jones, Consul General of Ireland, to her first IAW&A Salon. Ms. Jones graciously thanked the writers, curators, dancers, and all the artists who help create context for this historical moment. And we thank Consul Jones, and her colleagues at the Consulate of Ireland in New York for their kind support of IAW&A. 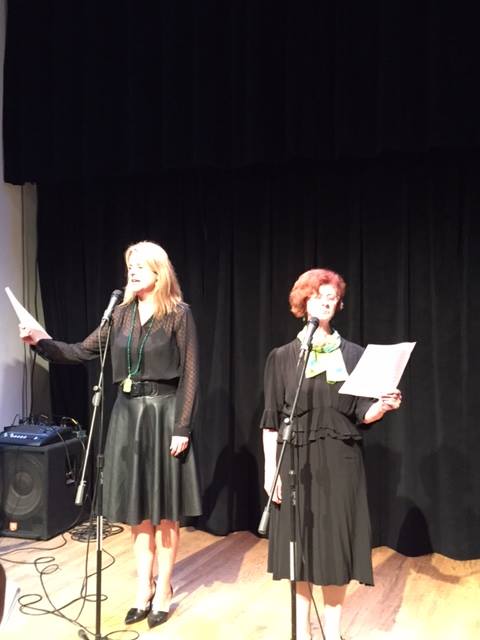 Maria Deasy and Maura Mulligan opened the Salon with a powerful reading of the 1916 Proclamation of the Irish Republic in Irish and English. Mingling languages and strong voices, they represented Irish and Irish-American participants in the Rising and honored the native language of the newly formed Republic. Noting that the Proclamationis the only declaration of independence to address both men and women in equal measure, Maria and Maura called to mind the many unsung female heroes of the Easter Rising.

Mary Pat Kelly, just back from Dublin, reported that women’s participation in the Rising is finally being celebrated. Mary Pat’s latest novel Of Irish Blood features a young Nora Kelly, in Paris in the early 1900’s, meeting historical characters such as Maud Gonne, William Butler Yeats and Countess Markievicz. The revolutionary women challenge Nora to honor her history and join the struggle to free Ireland. Of Irish Blood was inspired by the life of Mary Pat’s great-aunt. 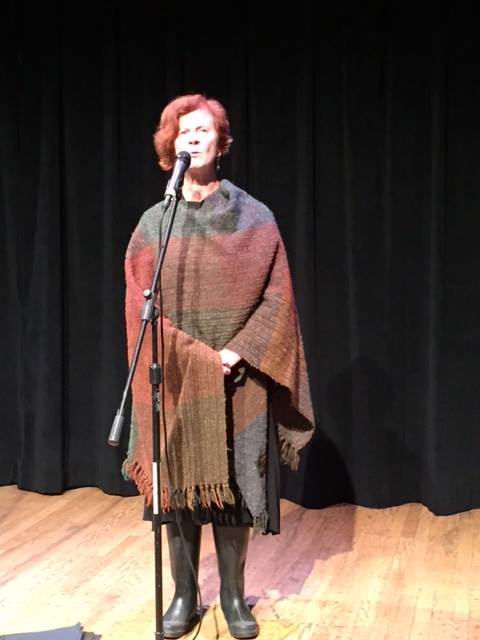 Presenters honored the poets and patriots of 1916, starting with Maura Mulligan’sperformance of Padraig Pearse’s “Bean Sléibhe ag Caoineamn a Mic” (“A Woman of the Mountain Keens Her Son”). Blessing the green sods covering her son’s body, Maura exuded the mountain woman’s strength and acceptance of a death that “cannot be denied.”

Tim Dwyer read his own work reflecting on the losses of Easter Week, including “Cherishing All the Children.” Tim’s poem “First Martyr, 1916 –Francis Sheehy Skeffington” was published in the Easter Rising issue of the Irish literary journal, Boyne Berries, which sold out in one week. Tim also sang a verse from the “Lament Of James Connolly” by Patrick Galvin.

John A. Brennan read two tributes to the men and women of the Rising with the classic “Easter 1916” by William Butler Yeats and John’s own homage to Pearse, entitled “The Poet.”

Imagining a new traditional Irish song, Gordon A. Gilbert recited the lyrics to his “No Hereafter – Easter 1916” which embodies the spirit of some Irish rebels.

Dublin-born actor Gina Costigan performed a poignant soliloquy from Honor Molloy’sand in my heart, a story of love and loss during the 1916 Uprising. Gina was incandescent in her IAWA debut. A version of and in my heart will be performed in early May at the Dublin International Gay Theater Festival. 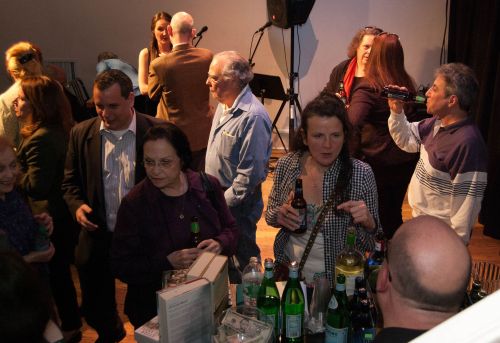 Books for sale and refreshment available with donations

“We may have brave men, but we’ll never have better
Glory O, Glory O, to the bold Fenian men.”

Maureen Hossbacher performed a stirring rendition of “Down By the Glenside.” The song, written at the time of the Easter Rising by Peadar Kearney, who also wrote “The Soldier’s Song”, recalls the failed uprising of the Irish Republican Brotherhood or “bold Fenian men” which fueled the later revolution.

County Laois-born novelist Tom Phelan presented an alternative perspective of the Rising, that of an Irish soldier after the Battle of the Somme in July 1916. Tom notes that a quarter million Irish men served in the British Army during the First World War, and over 32,000 died.  Tom shared excerpts from The Canal Bridge, his acclaimed novel of Ireland and the Great War,

“Twenty-seven thousand men down in four hours, and we saying that the people in Dublin thought they had something to cry about with the twelve lads shot in Kilmainham. Twenty-seven thousand lying in the muck in front of us, many of them from Ireland, but all that Ireland could think of was twelve bastards who stabbed in the back every Irishman fighting against the Germans.” More about Tom and his works at www.tomphelan.net. 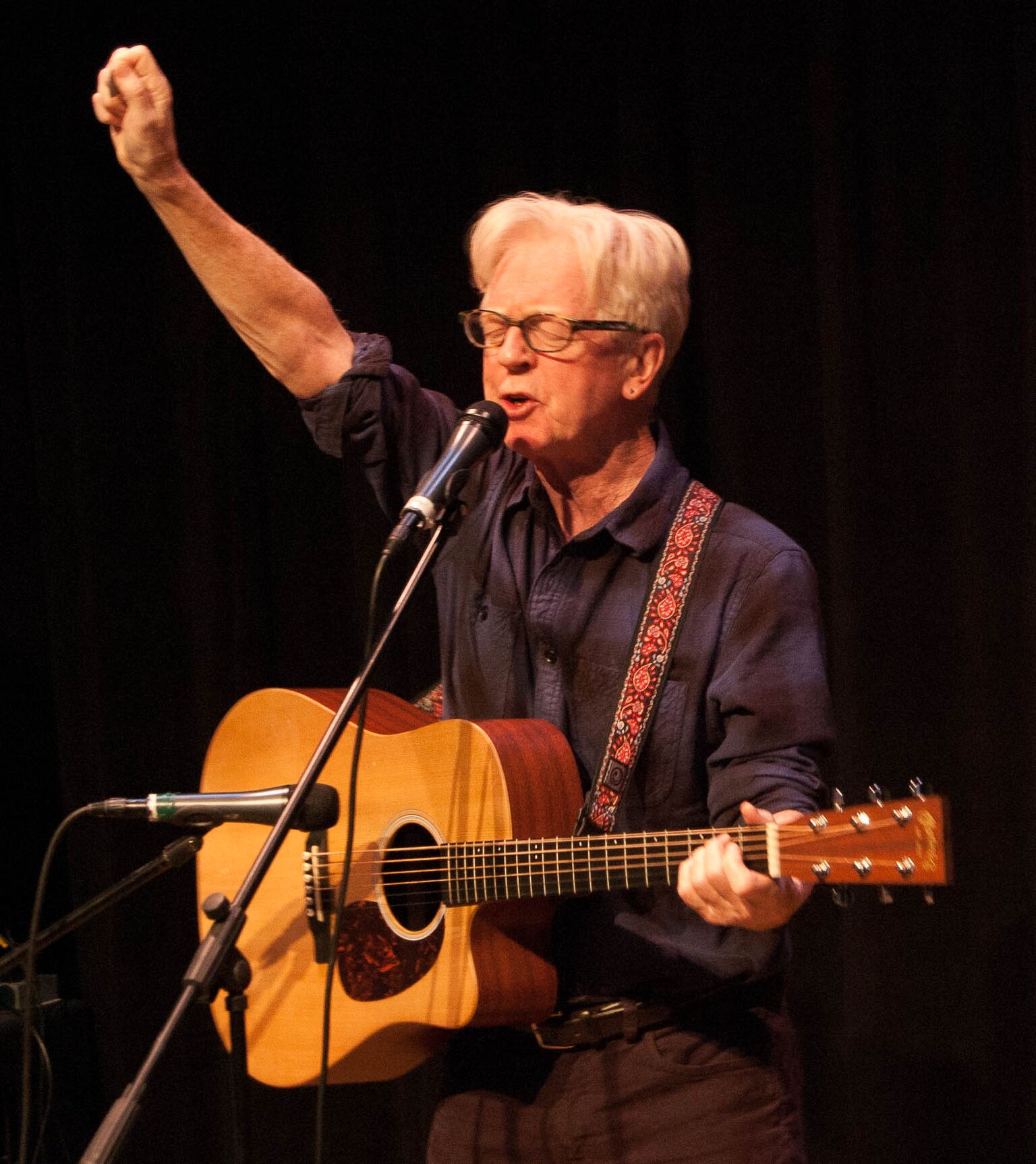 IAW&A president Larry Kirwan also touched on the World War I, and described growing up in a Wexford family of mixed alliances. A great-uncle serving in the British Army was killed in Belgium in 1915, while Larry’s grandfather was a supporter of the Irish Republican Brotherhood.  Much of his work has focused on historical events. Larry wrote the play Blood, about events leading up to the 1916 Uprising. He sang “Touched by Fire” a song he wrote and recorded with Black 47 about Countess Markievicz. And finished the night, with the Black 47 anthem “James Connolly.”

“ …a mighty man with a mad rage in his eye
They shot him in Kilmainham jail but they’ll never stop his cry
My name is James Connolly, I didn’t come here to die
But to fight for the rights of the working man…”

See you next time at Bar Thalia, Thursday, May 5!