IAW&A joined charismatic singer Tara O’Grady to celebrate the release of her new book, Migrating toward Happiness: The Soundtrack to My Spiritual Awakening at Tara’s Tuesday night gig at Winnie’s Jazz Bar in the stylish Refinery Hotel on West 38th Street.

Her memoir recounts her road trip–Tara drove cross-country in a 1957 Chevy Bel Air, following the route of her Irish born grandmother–and the events that inspired it, the people who inspired and encouraged her along the way.The trip was also a path to Tara’s spiritual awakening. To purchase please go to Tara’s website. 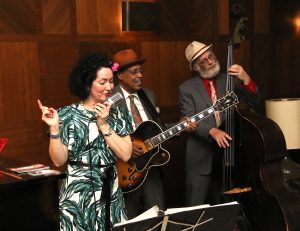 Tara and her band 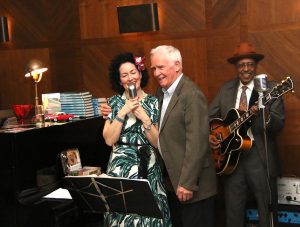 Tara and her Dad

At Winnie’s, Tara and her band offered up a variety of music that included jazz, pop, rockabilly and swing plus an Irish tune or two, each with a connection to her book. Tara’s original composition, “Jumpsuit of Jewels,” is an homage to the 1957 Elvis and “I Love You with All My Blood,” based a quote from her young nephew. Recalling summer visits to Donegal, she sang “I’ll tell Me Ma” and from the American songbook, “Sentimental Journey” and “Stardust.” 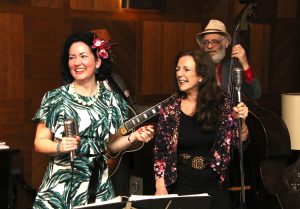 Tara’s enthusiastic fans, friends and family members filled the house. She introduced friends who influenced her profoundly, a Tarot reader from Greenwich Village, and Dr. Christine, a psychologist/singer, who also duetted with Tara in “Dream A Little Dream.” Dr. Christine’s self-help book Ignite the Genius Within is available on Amazon. 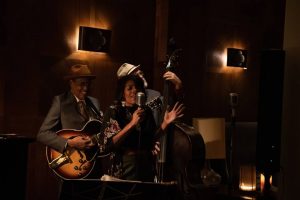 IAW&A’s John Kearns took the mic to explain the IAW&A’s mission and activities, and read his poem, “Song of the Anthracite Coal Miner,” excerpted from his play, Sons of Molly Maguire, which has been produced in New York and Dublin. 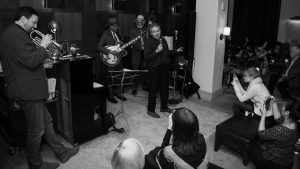 Our own Jack Di Monte delivered a smooth rendition of the jazz standard “I’ll Remember April.”  Our comic performer Sarah Fearon did a few minutes of standup geared to fit in with Tara’s spiritual exploration, and a plug for her own solo show 2B, to run April 25 through May 12 at The Players Theatre. 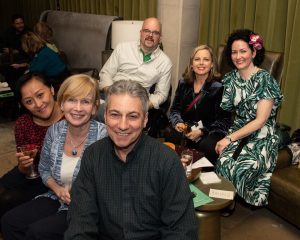 A terrific night, enjoyed by all who came out to support Tara!