Our late April Salon took place at The Ellington restaurant, located on The Upper West Side of Manhattan and hosted by Jack Di Monte. Revelers enjoyed delicious food and beverages under the warm and inviting ambience of the Ellington’s Straus Room. 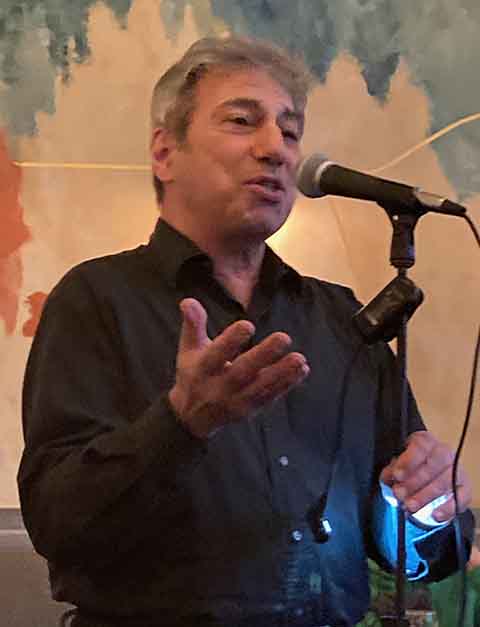 Our first presenter was Al Gonzalez, a Jersey boy who went on to join the NYPD, walking the beat in Times Square and working a radio car in the South Bronx. Al was also  bodyguard to Frank Sinatra, Mother Theresa, and Princess Diana. Al shared a passage of his upcoming Memoir, “The Wearing of the Blue,” which provides an unfiltered look at the chaotic and sometimes humorous occurrences of life in uniform from the boogie down Bronx to Buckingham Palace. He shared from the chapter, The Schnorrer, circa 1989, One character, named “Packy,” was a Kildare man and had arrived in America during the Vietnam War era. He was a mounted police officer who had served in the Navy, and decided to join the force after that. Listening to tales from a former police officer, serving on the streets of New York City, with an Irish character highlighted in the chapter it was the perfect way to kick off the night.

Our second presenter was Karen Daly, with a personal essay about her reflections on New York. Karen’s essay took us on a nostalgic tour of New York City landmarks that she loves.  Inspired by a childhood lost in books and old movies, she showed us midtown places where theater folks, artists and writers lived and worked. Karen Daly’s essay alluded to the Pandemic “deserted Midtown Streets.” She also mentioned Spring and flowers blooming, perfect for our late April Salon. Karen’s work demonstrated the resilience of New York City, and the many crises New York has survived: “My City Held Fast.” Karen is a longtime IAW&A member, Board Secretary and forever New Yorker. 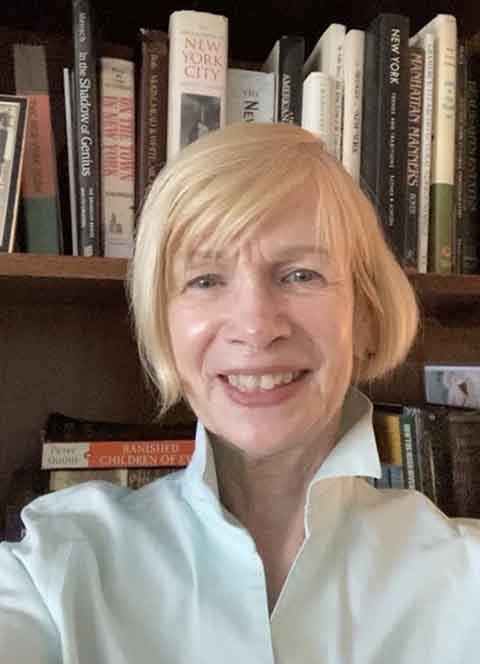 Our third presenter was Mary Lannon, A 2020 Queens Council on the Arts Grant recipient. Mary shared from her long short story, “The Key to Catastrophe Management,” published for the first time at The Write Launch. The story was a finalist in the 2019 Iron Horse Literary Trifecta Contest for the long short story. Mary shared her story about an unexpected friendship; “…we first met searching – in what can only be understood as a mockery of our ultimate fate – for meteorology class.” Throughout the story the weather juxtaposed with Charlie and Lou’s experience as students and friends. Mary is a professor at Nassau Community College in Long Island, NY, and lives in Queens.

Next, we enjoyed a musical interlude from Erin Hall, New York City based and (Boise born and raised) Erin has been sashaying the city streets for more than a decade; performing music venues, comedy shows, and independently releasing under the name Erin and Her Cello—though she now goes by Erin Hall. She has been featured on WNYC’s New Sounds, Broad City Live, and opened for the Cello Project, among others. Erin’s latest album, Great Blue (self-released 2019), defies easy categorization, jumping from Latin, funk, jazz, and blues to French pop. Erin mixed comedy with music and shared a few of her songs including one called “Lullaby and see you soon.” She had salon attendees torn between song and laughter with her unique and hilarious lyrics about the ordinary details of city life, conquering the monotony of the nine to five job, and discovering the beauty in unexpected places – like the pond in Central Park where she spots the majestic Blue Heron. 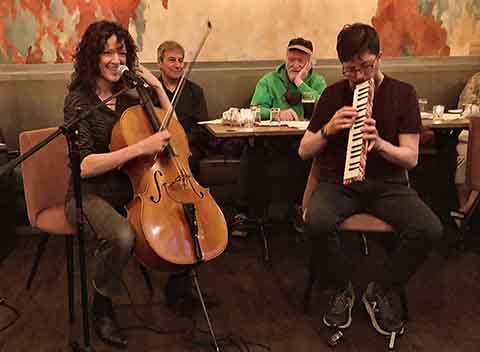 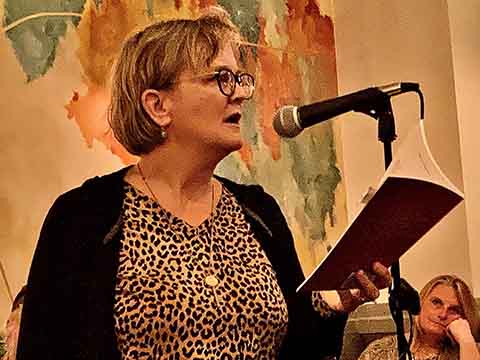 After a brief intermission, the second half of the Salon began with Marcia Loughran who read two spring” poems and a new mini essay Called Sushi Bar in Paradise.” Her most recent chapbooks are available at The Poetry Box or through Marcia’s website.

John McDonagh is a playwright, cab driver, comic, and political activist. After a three-run month run at The Irish Repertory Theater his play Off the Meter on the Record is currently on a world tour, starting in Long Island City Queens then on to Donegal, Dublin, and back again. Directed by the world-renowned Ciaran O’ Reilly the play is the culmination of a thirty-five-year career of driving a yellow cab while trying to make a difference in the world.

John a had the attendees at the Salon roaring with laughter with his stories about his journey creating the play and produced at the NYC Fringe festival and the Cell theatre in NYC. John poked fun at the differences between current twenty-two and 23 year olds and earlier generations he encountered while trying to get onto “The Moth.” Eventually, he ran into The Moth’s creative director by accident and triumphantly got his chance to be part of the popular series.

For more information on John and his work please visit his website. 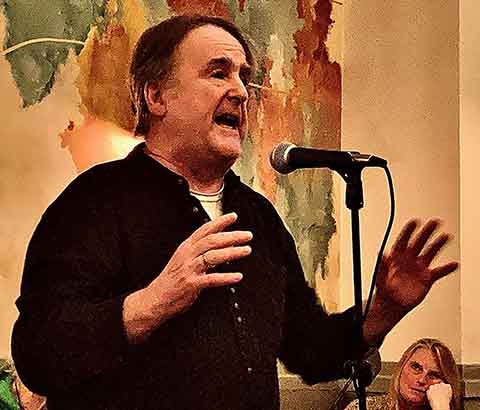 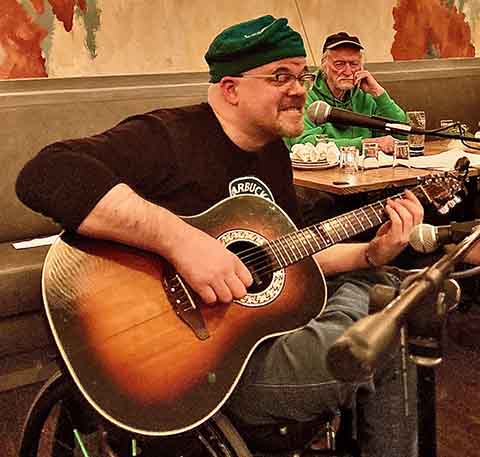 Brendan Costello, Jr., IAW&A Vice President and Salon producer, closed the evening with a selection of three songs By Tom Waits, “Romeo is Bleeding,” “Raindogs,” and “Time.” Brendan played guitar and encouraged the audience to snap and sing along during his performance. He dedicated the songs to two friends of his that had recently passed away. Brendan’s performance was the perfect way to end the IAW&A’s late April evening Salon at The Ellington.