On a hot and steamy first of May evening, the Irish American Writers and Artists met for the fourth time at our newest venue for our first Tuesday salon: St. Patrick’s Bar and Grill on West 46th.

Our host for the night, actor, writer and man about town, Tom Mahon began with a penetrating dramatic short story called “Rain,” a first person narrative echoing a Jack London style rugged adventure. “Rain” is the story of a miner in the Yukon, who eventually sells his claim to Guggenheim and leaves his dreams of finding gold behind him. Rain is a riveting short narrative where we learn of the abuse, hatreds and envies that arose between the miners. This story brought us into a feisty evening of Irish story telling and singing.  Tom, right.  Photo by Cat Dwyer.

Tom was followed by our beloved poet and spokesperson of the West Village, Gordon Gilbert who enchanted us once again with two monologues from his collection: Tales from the Old Folks Home, a wonderful tongue in cheek view of what really happens to those of getting up in years or having to place loved ones in what we hope is wonderful care. Look to hear the full story of Monologues from the Old Folks Home at the of June at the Cornelia Street Café in the West Village. Details coming soon. Gordon’s honey toned voice belies the dark inner belly center of a sweet “Old Folks Home” Where is this home? We don’t really know, but if you see it pop up on Google or Yelp, make sure you check out the reviews before signing over your fortune, or hear “the rest of the story” when Gordon presents the full-length piece next month.  Gordon, above.  Photo by Cat Dwyer.

Next up, Thom Molyneaux, a salon regular as well as director, playwright, actor, took the opportunity to honor, inspire and encourage those of us who have chose the writer’s life. He began with a reference to a source of his own writing inspiration, riding the A train to and from Harlem. This led him to share with us dramatic readings from two playwrights, about writing, a brilliant selection of dialogue from the Faith Healer by Brian Friel, and a specific speech about writing from Tom Stoppard’s The Real Thing. It was an inspirational moment of theatre and passion for standing up for truth.  Tom, at left, in a photo by Cat Dwyer.

Keeping with the dramatic theme, next up was James Cullinane, a playwright and a somewhat new presenter. James gave us a teaser of an introduction to a hilarious yet seemingly personal play in progress. A short scene between best friends, two men of a “certain age”, one of whom is a self-professed womanizer needing advice about changing his ways, while his best friend is humorously both unsympathetic and oblivious to his plight. The scene was presented masterfully by the author himself and Tom Mahon. The rapid-fire over-lapping dialogue kept the audience in fits of laughter. Good comedy is always based on some kind of recognition in the characters presented, which Jim did to great effect. It is always great to see “work in progress” at the salon, as that was one of the founding members goals, to have a place for artist to test out new work, get feedback and keep on creating. Many novels, plays and shows have come out of our IAW&A. We can’t wait to here the next episode, Jim! 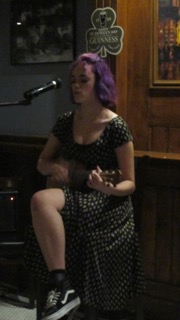 The next presenter, much to our delight, was Gillian McCourt, granddaughter of our spiritual Godfather and Salon founder, Malachy McCourt. This was Gillian’s first time presenting and she took the stage like she was born to it. She gifted all of us who were there with a delightful original song, called “Ordinary Birds”. She accompanied herself on the ukulele and sang in the most angelic voice about a deep and stirring matter. “Ordinary Birds” is a song of inspiration and hope about ordinary life and beauty. We so loved your presence, Gillian, and hope we get to see you again!   Gillian, at left.  Photo by Maureen Hossbacher.

The first half was completed with the velvet tones of singer and actor, Jack DiMonte with a soul felt rendition of the song, “Practical Arrangement” from the musical, “The Last Ship” by Sting. The song is a marriage proposal from an older man to a much younger woman who is in need of support and shelter.  Instead of offering the romance of a lifetime he suggests they enter into “a simple rearrangement” that will benefit them both.

After a lively act break of discussion, both political and non-political, we were led into the second act by our usual host, John Kearns. John presented two pieces inspired by his trip to India in 2016.  The first was a brand-new poem about connecting and taking photos with groups of Muslims at the Jama Masjid mosque in Old Delhi.  It’s entitled, “Masjid Jahan Numa (World Reflecting Mosque) November 2016.”  The second was a year-old comical song about riding around Delhi in a three-wheeled auto-rickshaw or tuk tuk, called “Take a Trip in a Tuk Tuk.” which soon led the audience to sing a long and provided a much needed humorous relief. 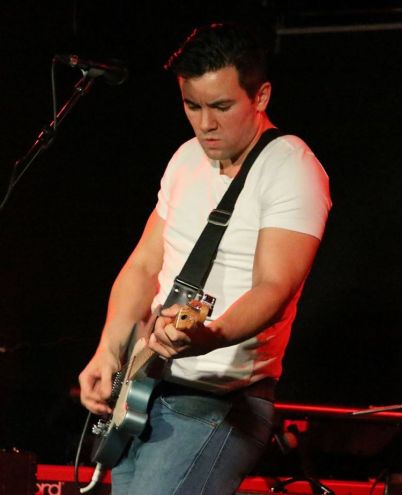 Eoin Glackin was our next presenter, an amazing singer/song-writer from Dublin. Eoin led of with a poem he was inspired to read because of Gillian’s debut. Then he sang a song entitled “Barabbas Walk Free.” He has a bluesy Dylanesque style of pure magic, a mixture of wit and deep emotion. His website is Eoinglackin.com, where you can connect to him on his other platforms and see where to catch him next as well as hear his wonderful voice and music.

Eoin was followed by Kathleen Vaughan,  an IAWA regular. She read a piece from her upcoming book Raised By Nuns & Drunks the selection was about “flying dreams” that lifted her from the dark days of childhood, comforting her during her stay at the Lt. Joseph P. Kennedy Jr. Home.  She always went to bed feeling abandoned and as if she was nobody’s child, but after her wonderful “flying dreams” she was able to feel powerful and like she was a child of the sky, and of course a child of God.  All she had to do was lift up her arms and point to the sky and she was lifted up and I was off towards the gates and she often wondered whether they were the orphanage gates or heaven’s gates, that she was flying through.  Kate, at right.  Photo by Cat Dwyer.

Brian Fleming entertained us with an original song of his called “Temple Bar Me Arse.” Brian is also a very fine drummer and has played on some 50 albums. He is also named in the Guinness Book of World Records in 2001 as one of the creators of the biggest drum in the world. He is the author and performer of three one man theatre shows which have enjoyed success in New York and back at home in Ireland, where Brian shares his time between Co Clare and Dublin, where he creates magic with Dublin’s Culture Connects. Find him at http://www.brianfleming.ie

M.C.Neuda left us on the edge or seats with an “almost crime” piece of flash fiction entitled “In Liffey’s Bar,” where getting-to-know-you in a bar has unexpected consequences, and a piece of micro-fiction called “Fatal Day,” based on a true event and written in memory of Fire Battalion Chief Michael J. Fahy. As always M.C.’s writing and fiction are delivered with style and an edginess that leaves us craving more! Can’t wait to hear what her next story is!!

We were led back out into the suddenly summer New York City with a wonderful chat by our dear Malachy McCourt, followed by a song whose title escapes me now, but sure it was grand to end the night with us all singing together again