The mid-May IAW&A Salon brought drama, poetry, memories and dance to vivid life at the Cell. Belfast artist Brian John Spencer, back in New York this month, stopped by to delight members of the crowd with his spot-on sketches.  And, we can  say for sure this was the first time the Salon has featured brain surgery!  (See below, Tom Mahon’s presentation.)

Host John Kearns (above)  kicked it off with a blast from his past, a song he wrote and debuted in May 1985 at the Bothy Folk Club at Cavanaugh’s bar in West Philadelphia. “That Would Be Something” offers a list of serious/comic dreams and ideals that the narrator says he would kill himself to see — perhaps because they could never exist in this world. John will take part in the Year of the Irish Language Celebrationat the Irish Consulate on Wednesday, May 23. For info and to attend:  https://www.eventbrite.com/e/ceiliuradh-bhliain-na-gaeilge-bliain-na-gaeilge-celebration-tickets-45831798142

Playwright Sheila Walsh performed with Maureen Hossbacher and Nancy Oda in  a scene from Sheila’s play Mr. Tweedy’s Neighbors. Though the play deals with the realities of aging and loneliness and the hardship of caregivers, Sheila’s sharp writing and their assured performances gave it humorous spin. 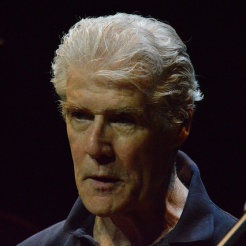 Proud father Tom Mahon showed a video of his son Brad Mahon’s work in an operating room during brain surgery. Brad, a cognitive neuroscientist at the University of Rochester, works on ‘mapping the brain’ and in this case, helped the surgeon determine where to cut. That the patient involved was a young musician made the successful outcome extra meaningful to our group. 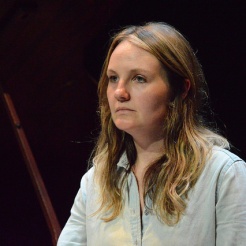 Derek Murphy showcased a short play, “Two Women on a Fence” from a longer one he’s currently developing, The Love Parts.  Actors Gina Costigan and Sarah Street play two young mothers at school pick-up who shock and disturb each other with tales of infidelity, real and imagined. One of them reveals a long held secret that will change their relationship forever. Derek is thrilled with how perfectly Gina and Sarah captured the humor and pathos of his work.   You have the chance to see the same short play at the Lower East Side Festival, Sunday, May 27th at Theatre For The New City at 7:30pm.  It’s a free event and a great kick off to the summer.

We were happy to welcome Salon newcomer Niall Power, (above)  a poet and writer, and former CUNY writing student of Brendan Costello’s, Niall read selections from his book Fall Risk, and new poems from his work in progress. Niall’s parents are Irish-born, and one poem recalls summer visits to his grandparents there, framed by his memory of candy commercials. Find his book here https://www.michelkin.com/fallrisk.html

Rosina Fernhoff performed a fiery monologue from Donald Margulies’ play Collected Stories, portraying a painful ending of a close friendship. In the scene, a celebrated writer, perfectly captured by Rosina, excoriates her protégé,  played by Maria Deasy, for stealing her secrets and publishing the writer’s stories under her own name.

Philadelphian Tim Fitts  (above) teaches Creative Writing at the Curtis Institute and he persisted through traffic and torrential rain to get here tonight. We’re glad he did.  Tim read “Dinner at Garofalo’s”  from his new collection of short stories, Go Home and Cry for Yourselves, a series of stories about a fictional band set in Gainesville, Florida, in the early 1990s.  https://www.amazon.com/Home-Cry-Yourselves-Tim-Fitts/dp/188327527X 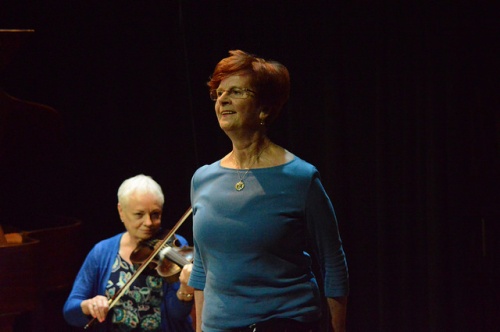 Celebrating the anniversary of her arrival in America, Maura Mulligan recreated an unforgettable moment from her 1958 farewell party in rural Mayo that ended with a traditional step dance.  Maura told the story, and performed the dance, accompanied by fiddler Marie Reilly.  Maura is also celebrating the five year anniversary of the launch of her memoir, Call of the Lark: http://greenpointpress.org/gb_books.html Look for Marie’s music, including her latest CD Road to Glannagh, “one of the delights of the world of traditional Irish music,” at http://www.mariereillymusic.com 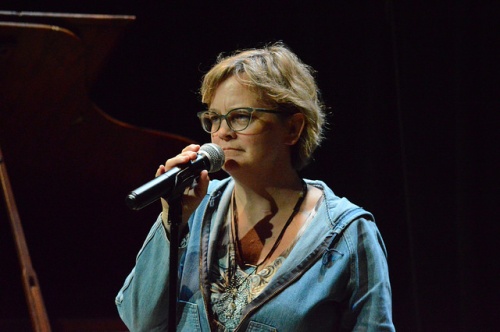 Poet Marcia Loughran (above) loves the Salon as a forum to try out her newest work on the audience as she did tonight with three poems that show her wit and sensitivity. They were “Holiday Ecstasy,”  “Fifth Grade English Teacher” and  “A Landlord’s Lament Upon Being Bitten By the Tenant’s Cat.”

Violinist and alt-pop artist Adrianna Mateo (above)  has been busy since her last Salon appearance: she opened solo for Alicia Keys at the Ritz, met music industry legend Clive Davis, shot with photographer Shervin Lainez – whose larger-than-life work is currently on giant Times Square billboards.  Noting that she’s taking a new direction with her music, Adrianna closed the Salon by performing two original songs including “Skin Hunger.” 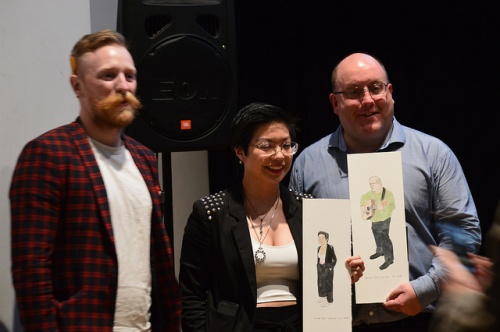 Brian John Spencer with two of his subjects.