Maureen Walsh Hossbacher and Kathleen Walsh D’Arcy, IAW&A’s inimitable sister act, produced and co-hosted a sensational early May Salon at Bar Thalia. They gathered a distinguished group of poets, actors and singers, adding new talents to our roster and bringing out a lively crowd. 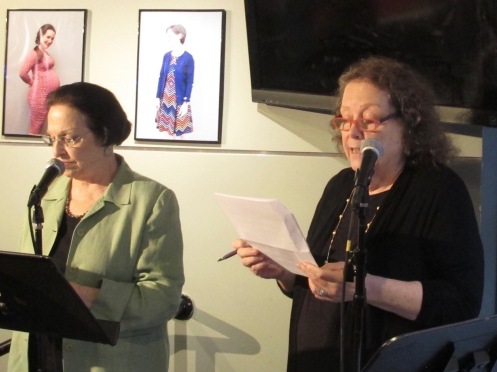 First of the night’s wonderful poets and new presenters, KC Trommer is a prizewinner (Academy of American Poets and the 2015 Fugue Poetry Prize) and author of a chapbook The Hasp Tongue (Dancing Girl Press). Tonight she read new poems that will appear in her next collection, including “Fear Not, Mary” and “When We See.” KC says she chose work that “speaks to the current political moment and are concerned with women’s agency and about how we can work together to create real change.” KC, pictured at right, will be the featured reader at the Queens Central Library on May 21 at 2 pm. For more information, please go to kctrommer.com 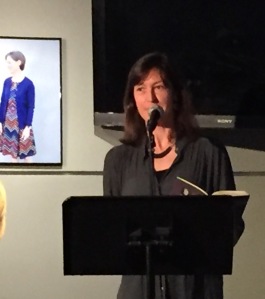 In her first Salon, Kelly Sullivan, (at left) a poet, fiction writer and teacher of Irish literature at New York University, read from her chapbook, Fell Year, published just last month by Green Bottle Press http://greenbottlepress.com/our-books/ Kelly’s poem’s included “Mount Desert Island, Maine.”  Her knowledge of Irish art is revealed in  “Anatomy School for Artists” which depicts the great stained glass artist Harry Clarke in Dublin in 1913. Kelly’s recent work has been published in Salmagundi, The Hopkins Review, Underwater New Yorkand The Clearing (UK). For more information about her poetry and fiction as well as her academic work on Irish writers and artists, at KellyESullivan.com. 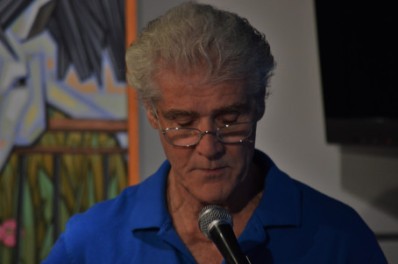 With his usual panache, Tom Mahon read from his story “Going After Bigfoot.” A young man helping his brother-in-law catch a fugitive before he crosses the Canadian border learns that the wanted man is large, irrational and dangerous. Though frightened, the young man aids his incompetent relative because he needs the money. Tom gave away copies of his children’s book Little Bigfoot created when his son was young and was fascinated with the myth of Bigfoot.

A new member of IAW&A, and first time presenter, actor and writer Matthew Maw is a native of Belfast and a graduate of NYU’s Irish Studies program. Currently experiencing the joy of being processed for a green card, he eloquently explored the theme of the immigrant as ‘stranger.’ First he read Kipling’s “The Stranger Within My Gates” and then Shakespeare’s masterful pro-refugee speech from his work Sir Thomas More. Matthew says he chose the two pieces to demonstrate that “the traditions of humanism, empathy and understanding will always win out over bigotry.” Matthew is pictured at left.

Another newcomer to IAW&A (this was her second performance) Ailbhe Fitzpatrick is another multi-talent: a singer, music producer, pianist, documentary filmmaker and fluent Irish speaker. Ailbhe sang two emotional songs: the ballad “The Parting Glass” and the 18th century folk song, “Mo Ghile Mear” (“My Gallant Darling”) by Seán Clárach Mac Domhnaill, a lament for a loved one in exile. 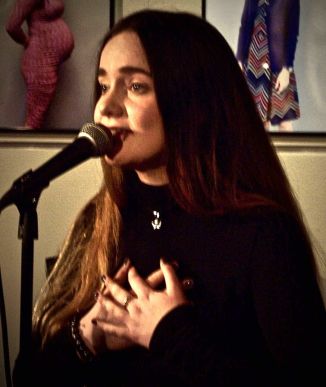 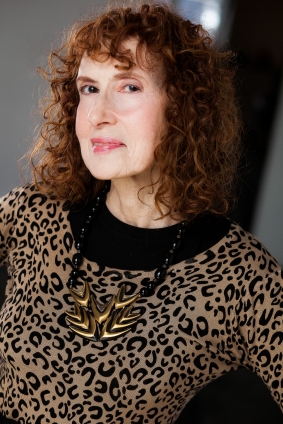 Madeline Artenberg, at right,  began creating and performing poetry at the famed Nuyorican Poets Café in the 90’s.  She has been writing, performing and studying ever since, and collecting prizes and accolades for her work. In her Salon debut, her work dealt with women’s relationships and empowerment: between a wife and a Sultan (in the sensual “The Sultan’s Wife”) a daughter and mother in “After Death” and a woman poet and a blind man. In addition to her poetry in print and online publications, Madeline co-authored the play The Old In-and-Out, which was produced in New York in 2013 and is based on her poetry and that of Karen Hildebrand. She will be featured next in the show at the Cornelia Street Cafe on May 19, What Were the ’60s REALLY Like?  More information at http://corneliastreetcafe.com/downstairs/Performances.asp?sdate=5/19/2017&from_cal=0

We’ve been eager to have Rosette Capotorto back after her appearance at last year’s Salon with the Italian- American writers group. A poet and author of Bronx Italian, she is a two-time recipient of the Edward Albee Fellowship Award. Rosette’s work has appeared in The Milk of Almonds: Italian American Women Writers on Food and Culture, and in Curragia: Writings by Women of Italian Descent.  She read her poems “Mother of A Priest” and “Broken Windows,” which documents Hoboken’s renaissance.

Jack DiMonte and Guen Donohue reprised their stellar roles as Stanley Kowalski and Blanche DuBois in a scene from Thom Molyneaux’s new play Tennessee’s Waltz. Their meeting, years after the events in A Streetcar Named Desire, took a metaphysical twist. Thom appreciated the audience response and promises to reveal another section soon at IAW&A.

As one of the famous Irish Tenors, Karl Scully has performed all over the world. He’s performed in the operas Carmen, Cosi Fan Tutti and Lucia De Lammermoor, and in the film Nora, he played the legendary John McCormack. Karl feels very much at home at IAW&A, where is becoming a legend himself with his glorious voice. He closed the show with “My Lagan Love” and with the Malachy McCourt anthem, “Go, Lassie, Go.”

Speaking of Malachy, the next Salon will launch his newest book, Death Need Not Be Fatal, with stories and song. Don’t miss it. 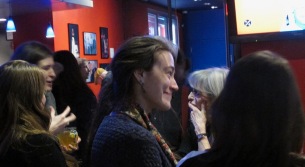 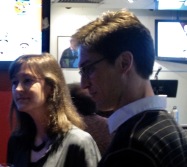