6.1.17 IN THE COMPANY OF ACCLAIMED AUTHOR MARY GORDON — IAW&A and AIHS sponsor talk and reception

IAW&A’s first joint program with the American Irish Historical Society featured the renowned novelist Mary Gordon in conversation with Mary Pat Kelly, on the release of Gordon’s novel, There Your Heart Lies, just published by Pantheon. Described as “historically [and] emotionally satisfying,” the story deals with an American woman’s experiences during the Spanish Civil War and its influence on her granddaughter’s life.

AIHS’ genial chairman Brian McCabe welcomed the audience to its elegant 120-year-old headquarters on Fifth Avenue. He offered guests a special keepsake: a 1995 issue of the Society’s former journal, The Recorder, that contained an original Mary Gordon story about her Irish-born grandmother.

As Lauren Bufferd notes in BookPage, “Mary Gordon has been writing compelling books about faith, love and family for four decades.” And many of us who have admired her work for decades turned out to meet her.

Introducing her friend and fellow novelist, IAW&A vice-president Mary Pat Kelly observed that Gordon’s first book Final Payments in 1978 was the first to give voice to “our experience,” meaning the inner lives of Irish Catholic raised women. Many of the women in the audience seemed to concur.

In a distinguished career since publishing Final Payments, Mary Gordon has produced several important, critically praised novels including The Company of Women and Pearl. Among her nonfiction works are the memoirs Circling My Mother and The Shadow Manand an award-winning biography of Joan of Arc. A professor of literature at Barnard, she’s been awarded a Guggenheim Fellowship, an O. Henry Award, an Academy Award for Literature from the American Academy of Arts and Letters and The Story Prize. 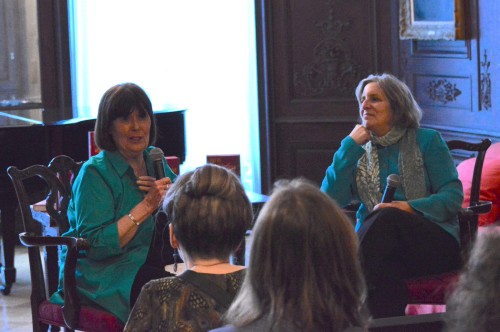 In a wide-ranging conversation, she talked about why she chose to write about the Spanish Civil War of the late 1930’s. The book has contemporary setting, with the character, at the end of her life, revealing the full story of hardships she endured during her time in Spain. Mary Gordon said she was “brought up in conservative Irish Catholic 1950’s New York in a family who believed that Franco had saved the world for the Catholic Church.” When she went to Columbia in the late 60’s, she found a very different interpretation, “that Franco had blood on his hands.” Gordon wanted to present “the unglamorous side of war” instead of the glorification seen in such writers as Hemingway and Orwell.

Writers in the audience were full of questions about Gordon’s research and writing process. For this novel, she undertook deep research and read widely to supply the history and to look for unexpected details. As an example, she discovered a little known fact that NY fur trade workers supplied fur coats to women participants in the Spanish Civil War. Remarkably, an audience member had grown up hearing the story through her own family.

As far as process, Gordon writes with a fountain pen and notebook, finding satisfaction in the motion and rhythmicality of writing. And yes, she writes every day, saying the “business of writing is being there; it’s not what you produce.” Gordon tells her Barnard students, “An imperfect something is better than a perfect nothing.”

Gordon was eloquent in reply to a question was about the role of shame in Catholicism, admitting its power and that in her experience, shame was often a default setting.

Mary Pat Kelly reminded us of Gordon’s wonderful storytelling ability and the book’s emphasis on women’s lives. One reviewer says,

We’re grateful to Mary Gordon for her generous conversation this night, and for her esteemed body of work. You may want to go and read them all. You can find the new book at Amazon or indie bound.org

Special thanks to the night’s organizers: