6/18/19 IAW&A SALON: A Pride Celebration, Dedicated to The Memory of Lyra McKee 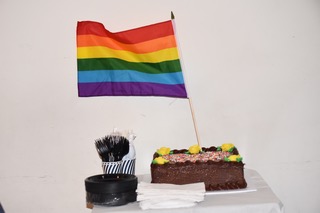 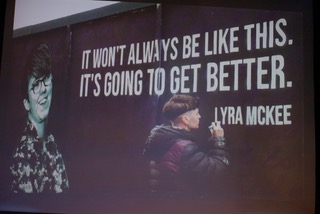 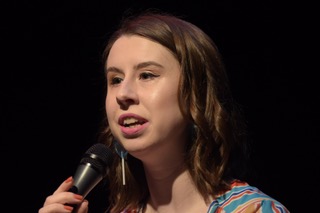 Dedicating the second annual IAW&A Pride Salon to the memory of murdered journalist Lyra McKee, host Miranda Stinson gave an eloquent appreciation of Lyra’s work and showed a short film version of Lyra’s Letter to My 14-Year-Old Self. At age 24, Lyra felt able to assure that teenage girl that her life, love and career would all be fine and that “Journalism will help you soldier on.”
Deeply moved by Lyra McKee’s death, Andre Archimbaud composed the poem “Agree to Disagree.”
You can read Andre’s poem on his blog. 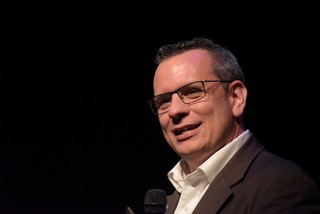 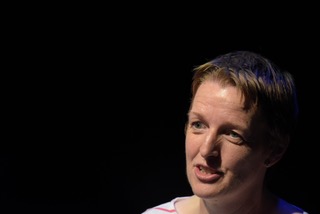 In that magical Salon synchronicity, novelist Yvonne Cassidy read from How Many Letters Are In Goodbye? in which a lesbian teenager composes letters to a mother who died when she was a child.” A heartbreaking story about the challenges of trusting, healing, and saying goodbye,” (School Library Journal), the book was an American Library Association Rainbow List Top 10 title with LGBTQ content for younger readers. Yvonne adds that it also had “the honor of being selected to be part of RuPaul’s Love Yourself Library.”  Yvonne teaches creative writing at the Irish Arts Center and the JCC on the Upper West Side.
See more of Yvonne’s work at her website.

Poet Bino A. Realuyo read from his completed poetry manuscript The Rebel Sonnets, including “Dark Energy” and ending with “Dear Blood” written as a contemplation on the effect of AIDS on the Queer community and from his “Eunuch” series about religious fanaticism and homophobia. Widely published, he is the author of the poetry collection, The Gods We Worship Live Next Door.
Read Bino’s reflections on work, education, writing and his community activism on his website. 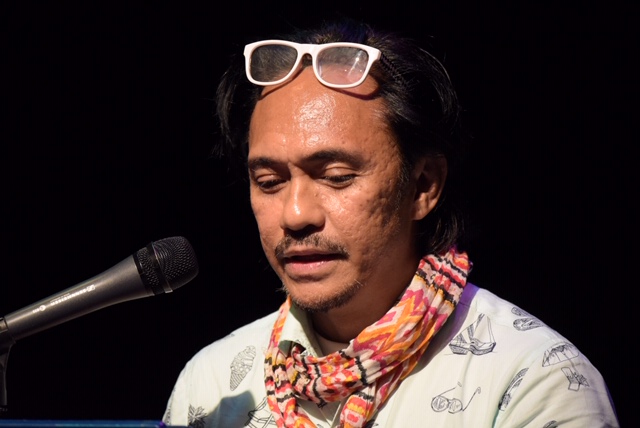 Award-winning journalist and humorist Rebecca Coffey made her second Salon appearance, with a reading of a fantasy scene from her novel Hysterical: Anna Freud’s Story. Described as a fact-based, fictional autobiography of Sigmund Freud’s lesbian daughter who became a pioneering child psychologist, it invites the question: Imagine Freud is your father and he’s analyzing you. Booklist called it “avidly researched, shrewd, and unnerving.”

Noting that Ireland is haunted by the ghosts of its history, Cahir O’Doherty unearthed a few of his own, including, he says, “memories of growing up gay in County Donegal in the 1980’s and what it feels like to be haunted by the ghost of Ian Paisley.” In a moving talk, he described the lessons he learned from Ireland’s long road to marriage equality. Arts and Travel Editor of The Irish Voice and a feature writer for Irish America Magazine, Cahir has reported on Irish American culture and politics for a decade and half. 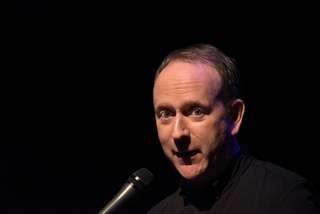 An essayist and editor who hail from Georgia, Parrish Turner writes on gender, sexuality, spirituality, rationality and more. He shared his poem “Rural Queers Throw the Best Parties” and reminded the audience to honor the Stonewall participants who are still living.
A 2014 Lambda Literary Fellow with an MFA from The New School, Parrish lives in Brooklyn.
To learn more about Parrish please visit his website.
Partners KT Mulholland and Ashley Pynn were happy to be back performing at the second Pride Salon, Ashley on guitar and KT singing. Lead singer of the indie band Kingkween, KT has performed in such iconic NY venues as the Bowery Ballroom, Gramercy Theatre, the Bitter End and the Knitting Factory. Ashley is a fu­ll time stuntwoman and passionate music enthusiast. They opened with a cover of OneRepublic’s “Counting Stars,” KT read the lyrics to an original song called “Liquid Gold” and previewed a new song from Kingkween’s debut EP, “Future Past” to be released on 7/05/19. 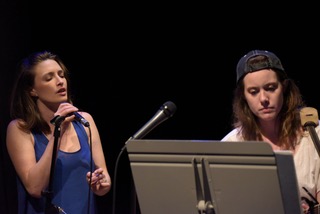