7-17-18 IAW&A Salon: A spirited evening of classic and original drama, fiction and stories, music and film!

A full house at the cell theatre enjoyed an IAW&A Salon that featured drama classic and original, fiction and stories from fiends who haven’t taken the stage in a while, and new music and film from first-time presenters.

Joe Mooney from the East Wall History Group in Dublin was on hand to record performances from the works of Sean O’Casey to be played at a new Sean O’Casey Festival this September in Baile Atha Cliath.

At the start of the evening, William Leo Coakley recited a passage from Sean O’Casey’s earliest extant play The Harvest Festival, the hero Jack Rocliffef’s passionate rebuke of the crafts union’ for ignoring the poorer laborers; and he ended with an attempt to sing “The Red Flag,” the closing lines of the play.  When Coakley worked for The New York Public Library, which holds the O’Casey Archive, he edited the first publication of the play which had been rejected by the Abbey Theatre and never produced.  He also told the IAW&A Salon audience of working with his widow Eileen O’Casey, describing her as the perfect wife for a writer and a presence in her own right. 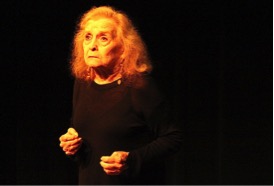 Rosina Fernhof responded to a call for O’Casey monologues with a piece from Sean O’Casey’s Juno and the Paycock, in which Juno mourns the death of her son, Johnny.  It is a monologue of rage, heartbreak, and acceptance of his death through her faith in the Mother Mary and Sweet Jesus. 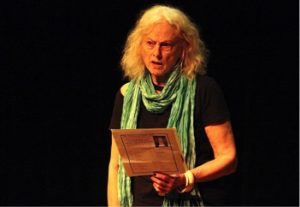 Vivian O’Shaughnessy followed Rosina with an overlapping monologue from O’Casey’s Juno and the Paycock.

Mary Lannon read from her novel-in-progress TideGirl, a dystopian novel that features children sponsored by corporations.  The book is narrated by three characters: a 46-year-old man who launched the Tide Detergent Babies (the Tide Babies) and two of the (now grown-up) Tide Babies, cousins name Marlee and Annie.  Mary read from Marlee’s chapter, in which she tries to decide whether or not to continue the corporate sponsorship in college. 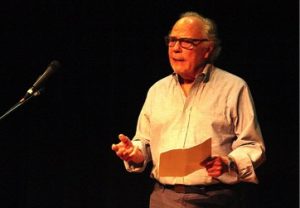 Ray Lindie made the IAW&A Salon audience laugh with humorous pieces from his “Bar Room Stories,” a  collection of tales from various bars he has worked in. 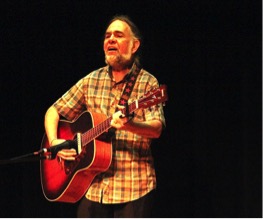 Bert Lee chose to present two tunes written in memory of his grandfather and grandmother.  His grandfather’s adventure in coming to the US as a boy only to fall in with a bad bunch, rob a train coming from the Denver mint, rob his co-conspirators, and return back east with a saddlebag full of confederate money the day the war ended… led to Bert’s writing, “The Money isn’t Real.”  “Little Finnegan.” Bert’s second selection was a meditation on how our lives are a tapestry of memories.  It was inspired by his grandmother who taught him to pay attention to the little ordinary riddles of existence. 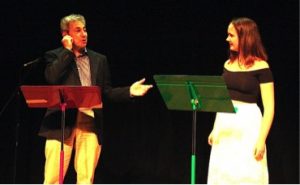 After the break, Alice Dunne (Joe Mooney’s daughter) and Jack Di Monte presented a scene from Sheila Walsh’s O The Days! with Maureen Hossbacher reading stage directions.  In eight minutes, the actors captured the longing, hurts and regrets of a father and his teen-aged daughter meeting  for the first time  in thirteen years . 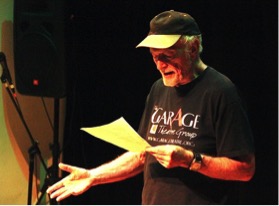 I was honored that Thom Molyneaux agreed to read a brand-new monologue from a play I have begun entitled, Boann and the Well of Wisdom.  In the monologue, Boann’s aging father expresses his desire for permanence or the illusion thereof.  He decides to turn over the management of his White Cow pub to Boann, as long as she agrees to run it in his traditional way.

Rosina Fernhof returned to the stage to perform the monologue she had planned to do before the call for O’Casey monologues went out.  It was from David Hare’s play Amy’s View.  The scene takes place backstage where Esme is preparing for her performance.  Dominic , her deceased daughter ‘s ex-husband comes to see the play and Esme  berates him for the hurtful, shameful way he left her daughter and, basically, blames him for her daughter’s death.

Like Rosina Fernhof and Vivian O’Shaughnessy in the first half, Guenevere Donohue performed the monologue from O’Casey’s Juno and the Paycock in which Juno mourns the death of her son, Johnny.  It is a tribute to the power of the monologue that it was chosen independently by three actresses.  The performances will be shown at the Sean O’Casey Festival in Dublin in September. 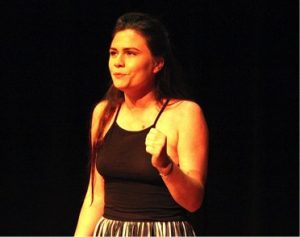 Niamh Ryan performed a monologue from her play, Eternal Youth, a rhythmic two-hander about Irish teens, which can be seen at the Hudson Guild Theater on July 31 and August 1 & 4. It has previously been performed in Galway and UNC Chapel Hill where it was awarded the Sam Seldon Playwriting Award. 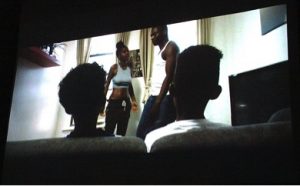 A shot from Charity Smith’s FADE

Charity Smith introduced and screened her directorial debut, a short film entitled FADE: Freedom Against Dark Enemies.  The film showcases the often-concealed vulnerable aspects of male life and the pain, stagnancy and the release of accepting your past and the realization that only you control your destiny and your freedom.  Fade won top prize at the Audience Awards Film Festival and was a big hit at the IAW&A Salon as well.

Erin and her Cello, aka,  Erin Hall and her husband, Gabe Shuford, concluded the IAW&A Salon with three of Erin’s original compositions on cello and piano:  “Petits Bisous,” “On My Stoop” and “Sober”.  For the final song, the IAW&A Salon audience enthusiastically joined in on the chorus, “I love you sober/And I love you hungover/I don’t need whiskey to let you hug and kiss me…” and kept humming it to themselves as they made their way to the bar.