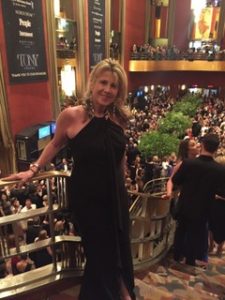 We had a full slate of music, comedy, theater and award winning writers as well as a full house at the August IAWA Salon at the cell theater. A first time Salon host, poet and screenwriter Jenifer Margaret Kelly brought in several first time presenters, including a classical guitarist and a millennial performance artist.  Plus, members got to meet and applaud the work of our 2018 Frank McCourt Prize for outstanding writing by a graduating senior at NYC’s Frank McCourt High School. 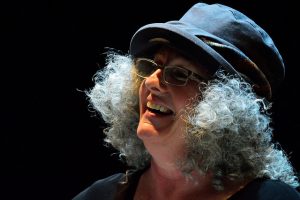 Writer Mark Blickley teamed up with actress Maeve Price to deliver his story, “So Zoo Me,” inspired by Donna Bassin’s photo of a silverback gorilla at the Bronx Zoo. Dublin-born Maeve perfected her NY accent playing a woman who recognizes her dead husband in the gorilla. Mark says the piece, while filled with humor, is “the unique journey of a woman becoming an Alpha Female and in order to achieve that distinction she needs to confront her dead husband in a heightened passive aggressive manner.” Maeve demonstrated that transformation powerfully. Mark (Dramatists Guild and PEN American Center, recipient of a MacArthur Foundation Scholarship Award for Drama) is author of Sacred Misfits.  His play Troupe 621 will be performed on 9.23 at the Annual Boog City Festival of Poetry, Music, Theater and Film. Visit Mark’s website. 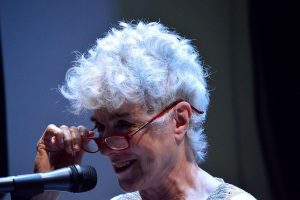 Ellen Cantarow is a journalist with experience reporting from abroad and domestically for publications that include The Village Voice, Mother Jones, Grand Street, Tom Dispatch, Truthout and more. Her oral history book Moving the Mountain: Women Working for Social Change, in print for 37 years, is used in colleges and universities. Reading tonight from her diary of a visit to the Sudan in 1985, Ellen described an unforgettable moment when her friend Noor fell under the spell of the whirling dervishes. 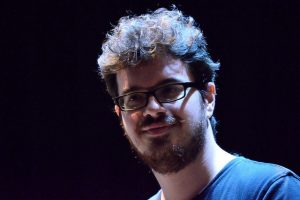 Special guest and winner of IAWA’s 2018 Frank McCourt Award for outstanding NYC high school student writing, Idiatou Tandiogora is heading to college to study writing and computer science. Her McCourt-winning essay, “Light at the End of the Tunnel” describes some bullying she faced in middle-school, and which she now assures us, she’s “over.”  And we can believe it, seeing this young woman take the mic with talent and great assurance.

Singer-songwriter-musician-guitarist from Brooklyn, Bert Lee presented two tunes from his recently released album Unintended Consequences. The title song is a meditation on the little things we ignore until they are unavoidable problems such as climate change and pollution. The poignant “Dead Man’s Coat” was inspired by his grandfather’s journey from Ireland to America to escape his past and his own father, only to find that he carries the memories with him. Bert hosts an open mic on the second and fourth Monday of each month at the Cowgirl. More at Bert’s website. 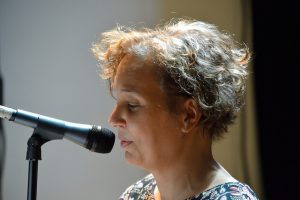 Award winning writer and humorist Kirsten Major has an MFA from Cornell, and she notes, Irish roots in Ulster and Wicklow. A founder of the NYC chapter of Women Who Submit, a collective that encourages women to submit their work for publication, Kirsten read a story that spoke to many writers in the house.  “Something Short of Happily Ever After” is about a writer and editor discussing, yes, a submission. 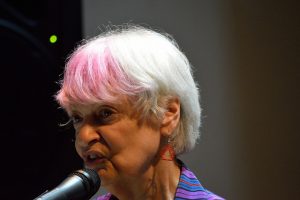 Sonia Jaffe Robbins, teacher, writer, activist and semiretired copy editor shared a beautiful essay “Audiences” that was prompted by her mother’s death eight years ago, and published online at Mom Egg Review. Sonia has written for the Village Voice, has a chapter in the anthology Red Diapers: Growing Up on the Communist Left, and a piece in the forthcoming Widows’ Words. 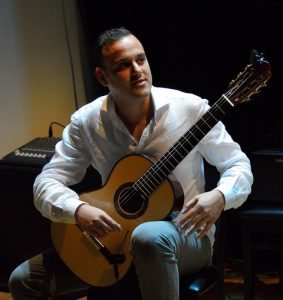 Italian born Claudio Paciocco has studied classical guitar with world-renowned masters and now composes, teaches, performs internationally and art directs music festivals and events in Italy. He astonished the audience tonight with three unique pieces,  “Classical Gas,” Eric Satie’s “Gymnopedia 1” and his own composition “Aria. For more information on Claudio you may visit his website. 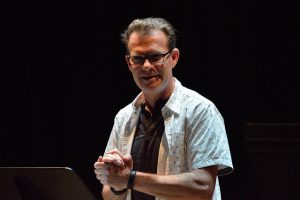 More dark humor was on tap from the Dublin born playwright Derek Murphy. Salongoers who enjoyed watching his Dyin’ for It as he developed it, were glad to see the latest short piece from his new play, The Love Parts.  A woman gets her husband to reveal some deeply held secrets in “Yeats in the Toilet.”  Sarah Street and Michael Mellamphy were perfectly cast as the couple. The duo will appear together with John Keating and Tim Ruddy in The Naturalists by Jaki McCarrick at The Pond Theatre from September 7th through September 23rd. For a 20 % discount on tickets, use code IAWA20 at The Pond Theatre website. 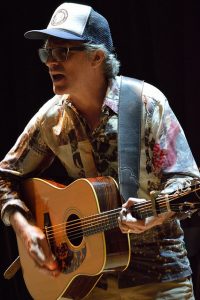 Another of our multi-talented friends, John Munnelly ended the night with two favorites.  He covered “Summer in the City,” The Lovin’ Spoonful’s NYC’s summer anthem.  John’s own “Candle in the Dark,” an original song that he hasn’t yet recorded, is already an IAWA crowd favorite, assuring us “It’s gonna be all right.” John is a songwriter, performer, artist and hot sauce maker— his own recipe available on his website.

Join us next time, September 4th at St. Patrick’s Pub at 7 pm.