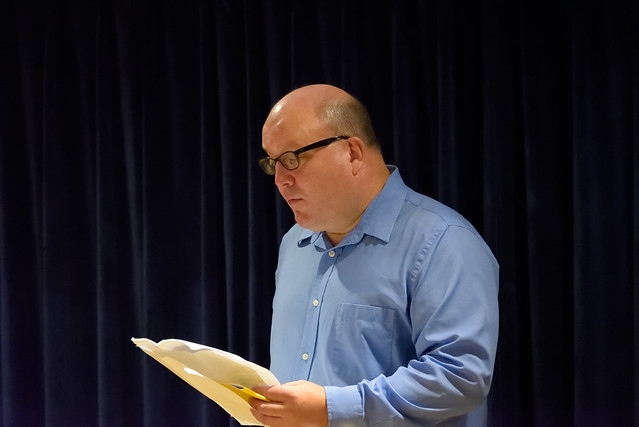 The night’s host, Salon producer John Kearns read two poems to start the program.  His “Blood of the Artist” was chosen as the inaugural poem for the new poetry journal, The Razor’s Wine. Inspired by a Bob Dylan concert, “Blood of the Artist” examines the relationship between artist and audience. His second poem, adapted from his novel, Worlds, depicts his character wandering the Lower Manhattan streets at lunchtime following the death of his mother. John is thrilled to announce that his new play, Boann and the Well of Wisdom will have a staged reading at Dublin’s Sean O’Casey Theatre on August 23rd at 8 pm with actors Niamh Ryan and Laurence Lowry.
For more details: Boann and the Well of Wisdom
Making her Salon debut, attorney and MFA in Creative Writing, Christie McEvoy-Derrico, amped up the suspense with a scene from her serial killer police procedural, Serial Injustice: A Suspicious Disappearance Squad novel, which was inspired by true events in Vancouver. 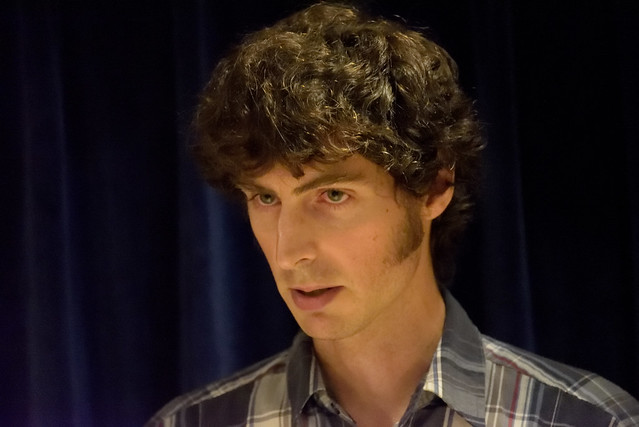 A writer with published short stories and an English teacher, Sean Hickey entertained the Salon with a reading from his completed novel Dreams from a Land of Dust. Sean says “the protagonist dreams of tangling with Russian spies on a hunt for a great white whale.  After he finds himself adrift in a small wooden boat on a sea of ice, with death at the hands (or fins?) of the whale a seemingly real possibility, he is forced to grapple with the state of his soul, plagued as it has been with thoughts of an affair that would destroy his family.”
Author of six acclaimed novels, Tom Phelan has recently released his memoir, We Were Rich and We Didn’t Know It: A Memoir of My Irish Boyhood.  Delivering the chapter “The Jubilee Nurse,” he brought to life an indomitable woman in his small home town of Mountmellick, County Laois. You will be able to hear Tom talk at the Garden City (NY) Public Library on Sunday, September 8 at 2 p.m. and at the Abbeyleix Library, Abbeyleix, Co. Laois, on Thursday, September 19, at 6 p.m.
More at Tom’s website. 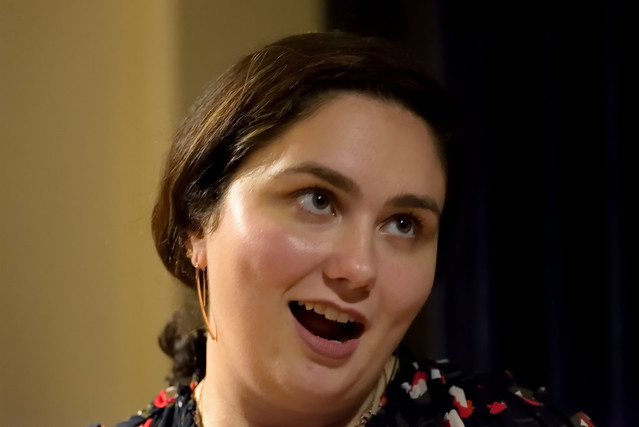 In her return to the Salon, harpist and vocalist Alice Smyth performed two songs that are stories told from women’s perspectives. One Alice calls “Didn’t Know What Love Means,” with new words written by Daire Mc Carroll, is the female version of “Beeswing” by Richard Thompson. A favorite of Alice’s, the charming “The Wallflower Waltz,” about a woman longing to dance, is from the Irish singer Aoife Scott.
For more about Alice’s background, or if you would like her to play at your event, please visit her website.

Acclaimed playwright and author of the novel Smarty Girl, Honor Molloy delivered a brief segment from her next project – a memoir about her childhood called Fallentown.
In the segment, titled “Girl Stands (on the burning deck)” set in autumn 1969, the Molloy family arrives in America from Ireland. There they encounter unfamiliar terminology, strange neighborhood traditions, and Peanuts – the dog across the alley. 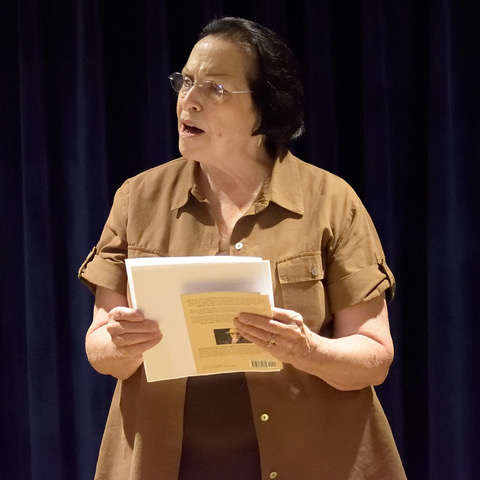 Maureen Hossbacher presented four well-received poems including “Old Girls,” a memory of her time at Notre Dame School with nuns who were “gliding enigmas in black”,  and a crowd pleaser entitled “Men Who Sing.” Maureen’s poetry, fiction and nonfiction has appeared in anthologies, lit mags and online. A vital member of our Salon Committee, her recent chapbook of poems, Lesser Known Saints, is available at Finishing Line Press (or at the next IAW&A salon, which she will host, at the Cell Theatre on August 20.)
Poet Bernadette Cullen offered deeply felt work, including her statement on the state of the world, “There is No Balm in Gilead”, in which she says, “once there were stars.” 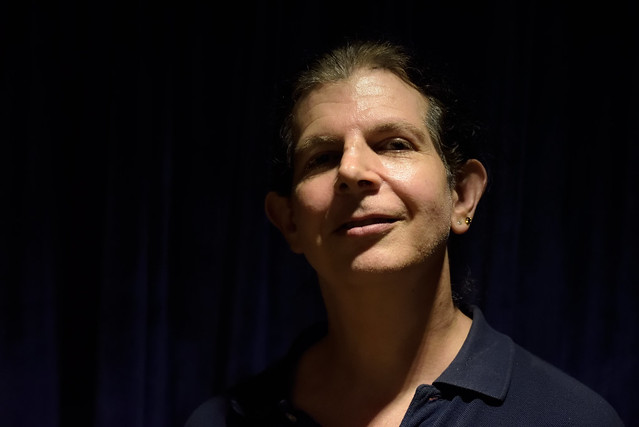 Writer/actor Alan Gary has been presenting selections of his memoirs that show his tenderness and wit. Tonight, he recalled the gift of his sweet grandma; that of a literature professor, and Alan’s brush with fame coupled with donuts and dog.
Rosina Fernhoff, actor extraordinaire, shared a piece of her own writing, about an incident that occurred on the night before Rosh Hashanah, when returning from acting class, she met an Irishman on the subway. 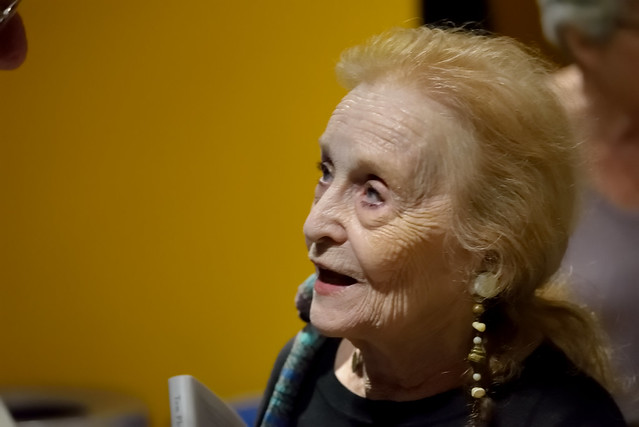 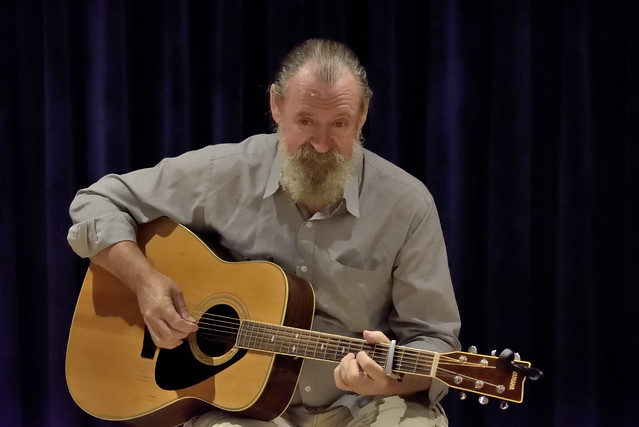 Trad music great Donie Carroll performed two songs, what he called “Galway Bay,” old style and “Till We Meet Again.” Donie has toured all over Europe with the Cork folk group, Finnegans Wake, and in the US, has performed widely in sessions, and acted at the Irish Repertory Theatre.
More at Donie’s website.
Malachy McCourt closed the evening with an account of his recent trip to Ireland with Diana and his family for the opening of the musical version of “Angela’s Ashes” by his late brother Frank. Malachy was particularly moved by the portrayal of his mother, Angela, causing him to reflect with gratitude on the blessings of his life.