An enthusiastic crowd filled the third floor of Saint Patrick’s Bar and Grill to enjoy a full slate of readers, actors, and musicians at the first IAW&A Salon of August.   We had some performances to compete with from downstairs but we handled it like troupers. 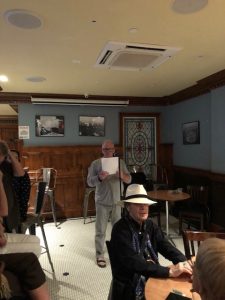 Jim Culinane led off the evening with a story about a woman disappointed with how her life has turned out.  She hasn’t envisioned a life filled with opportunity, each and every day, to do better or be better. She has turned inward and accepted the bleakness and lack of fulfillment in her life.  Jim adds, “As writers we try to envision others’ lives, their fears, frustrations, disappointments. Some are eternally disappointed with life and do not understand that life is what we, each one of us, make of it.  It is our creation.” 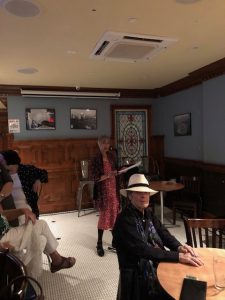 M.C. Neuda did not shy from the painful and gritty in the two stories she presented: one, a piece of literary short fiction called “Deja Vu,” a first-person telling of one of life’s hard truths; and two, a flash fiction crime story called “Expiration Date,” wherein the heroine takes fiery vengeance for harm done to a loved one. 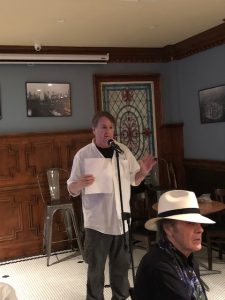 Radio host and playwright John McDonagh gave an update on what’s going on with the “Cabbie App Wars” in New York City.  He finished with reading a poem about a Yellow Cab driver who committed suicide by jumping into the East River by 86St and East End Avenue. 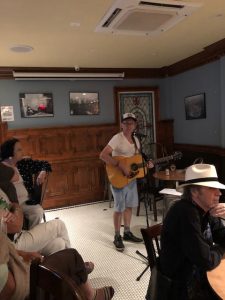 Singer-songwriter John Munnelly closed our first half with a lively set of songs.  The first two were world premieres, “Got Get to Gone Blues” and a number with the working title, “The Water and the Wine.”  His third song was not a world premier but new to the IAW&A Salon.  It has a working title of “Silence at the End of Everything.”  John created, invented and is the ‘chef’, cook & bottle-washer at Hattwood Hot Sauce (see more at hattwood.com). 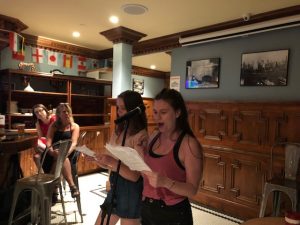 After the break, John Kearns was excited to have Dublin-actresses Alice Dunne and Niamh Ryan read the opening scene from his play, “Resignations” (see website), staged in June 2009 at the Planet Connections Theatre Festivity.   In the opening scene, JOY and GRACE, two office workers and former Art History majors, debate about the letter of resignation JOY is writing and the value of staying in their corporate positions.  After their daily absurd, jargon-laden conference call, JOY storms out and GRACE wonders if something aside from the job is bothering her friend. 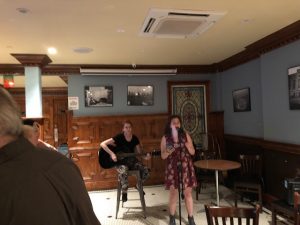 Recent college graduates Erin Krebs and Madden McDonagh (John’s daughter) sang and played a couple of songs for us, including a spirited rendition of Dolly Parton’s, “Jolene.”  Madden McDonagh is a multitalented instrumentalist and vocalist.  Erin Krebs is an experienced theatre director and performer.

Guenevere Donohue performed a newly penned comic rant, “Timing,” about what she learned cocktail-waitressing in a comedy club dungeon. But really it was all about the timing. 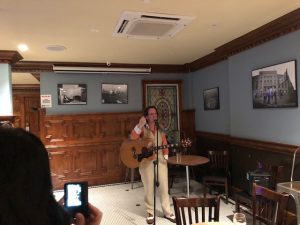 Singer, songwriter, entertainer Derek Dempsey sang two originals and one classic.  The first was “Empty Spoons (Sam’s Song)” with lyrics presented to Derek by Sam Cooke in a dream, and music composed by Derek when he was awake.  The second was, “The Policy Song” all about the pendulum’s never being allowed to rest in the center — and our kids getting shot in school.  He concluded the salon with a rousing rendition, complete with audience participation, of Frank Sinatra’s, “That’s Life”!

Don’t miss our next IAW&A Salon hosted by Jenifer Margaret Kelly at the cell theatre on August 21st at 7PM!