That note from a grateful participant sums up the mid-September IAW&A Salon at The Cell, hosted by Salon producer John Kearns.

It’s never too early to think Christmas with Mark William Butler. A playwright, producer, songwriter and IAW&A Board member – and producer of the program content for our upcoming O’Neill Award honoring Phil Donohue – Mark brought the wonderful Kaitlyn Baldwin and John Skocik to present a scene from his Ugly Christmas Sweater: The Musical. To see more, https://www.facebook.com/events/850476095110902/

On a somber but moving tone, frequent Salon presenter Gordon Gilbert, Jr. read two pieces that dealt with Alzheimer’s disease, one a short poem called “The Alzheimer’s Waltz” and a new monologue, “Waking to a New World.”

Maureen Hossbacher knows that nostalgia can be sweet as well as sad, as she illustrates in her captivating story, “Finer Things.” In it, an elderly lawyer reunites with the object of his unrequited love many years after the end of their affair. Look for Maureen’ s poetry chapbook Lesser Known Saints, due out in the spring from Finishing Line Press.

Leilani McInerney gave another astonishing performance with her enactment of her own writings on aging, death and the hereafter. She made sure to include “humor and enlightenment,” noting that she felt emboldened by Malachy McCourt’s Death Need Not Be Fatal.

Sheila Walsh was delighted with the performances of Nancy Oda and Jack Di Montereading Sheila’s short play “Finding The Fountain.” Another one-act in Sheila’s evening of eight one-acts, Lost and Found, the piece has a supernatural twist.

Singing in unaccompanied harmony, Dan and Bonnie Milner amazed the audience with their performance of two traditional Irish-American songs from their CD, Irish Songs from Old New England. In “Cork Harbor” a wild storm at sea blinds the narrator, who returns to Ireland and marries his beloved. In “Here’s Adieu to Old Ireland” a bad lad is arrested and transported to Australia. Seven years later, returning to Ireland, he finds that his mother, who had cautioned him to reform, has died in his absence.

Actress and singer Annalisa Chamberlin had a chance to showcase her talents tonight. She performed a darkly comedic monologue “Blue Mountain” in which a young woman ponders a marriage proposal. Committed, yet conflicted, she explores options that include marital bliss, murder and faking her own death. A new IAW&A member, Dan Brown from Rockaway Beach, wrote the piece.

Annalisa performed two original songs: a poignant waltz she composed this summer, which she played on the grand piano, and “Easy Answers” a satirical piece written by our own John Kearns who accompanied on guitar. 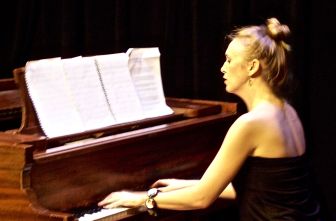 In Brent Shearer’s story, a husband pauses time while shopping in a toy store with his wife, but doesn’t make a big deal about it. Brent, a writer living on the lower West Side, loved to challenge the audience with his work.

Poet, screenwriter and novelist Christy Kelly shared some poems, including “To Be Alone” and a tender tribute to a late friend.

Sarah Fearon had the surprise treat of working with Omar Haddad on guitar accompaniment, which she felt made her comedy set “a beatnik jazzy performance piece.” Sarah covered such subjects as the pending apocalypse, DNA tests, quitting smoking and crazy names of juice bar smoothies. Catch more of her work at The Friars Club on October 3 and at Tallulah Lounge on October 18.  Email Sarah.Fearon@NYU.edu for info! 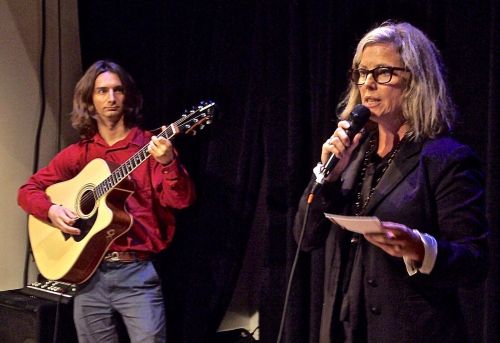 Singer, songwriter, artist John Munnelly played some original songs. “Expanding Universe” is the lead song on his ready-to-launch limited edition and handmade-designed-created EP/CD. He also sang – and we sang along – to “It’s Going to Be Alright,” composed last week for use at John’s songwriting seminar. Be sure to look out for John’s CD launch.  laughjohnlaugh@gmail.com or johnmunnellymusic.com

Singer, songwriter, actor John Skocik started the night performing as “The Ugly Christmas Sweater” and ended it by singing some of his rollicking rock songs, including “Son of A Bitch” and “Even If Takes All Night.

For more artistry and variety, come to the next Salon at Bar Thalia on Thursday, October 5.