The Tuesday October 15th edition of the IAW&A Salon included a diverse and talented mixture of member artists and special guests as we all joined together for another exciting evening of words, music, dancing and laughter at the Cell Theatre.  Salon regular Kathleen Rockwell Lawrence made her debut as guest host and graced us with her charm and good humor.  And away we go… 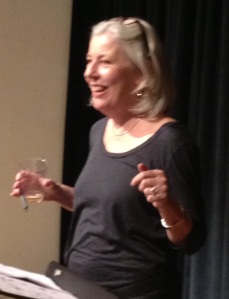 Kathleen herself began the evening with a reflection on Yeats’s warning that it’s easier to scrub floors and break stones rather than write; he tells us that we have to choose between “perfection of the life or of the art.” Yes, writing is hard, Kathleen agreed, but said that sometimes both life and art come together, as in our fun Salons.

Tom Mahon & Jack O’Connell then followed by acting a scene from Tom’s novel in progress, The Boy’s Club. Jack Dugan is a priest and is exiled to upstate New York for an affair in Manhattan with a socialite.  He’s unprepared and overwhelmed by parish duties and drinks.  Harry Dalton, like Jack, is a Vietnam vet, and arrives as Jack is smoking his first cigarette of the day with his first coffee.  Harry tells Jack the VA has diagnosed him with colon cancer, except it’s not colon cancer. They suspect it’s from Agent Orange.  Jack could get it too, but that’s the overriding concern in the scene.  Jack invites Harry to move into the rectory to die with Jack helping him ease out of life into death the best he can. Harry’s given 6 months.

Margaret McCarthy (artist@margaretmccarthy.com) then honored Halloween with her poem “Approaching Samhain,” about delving into our fear and fascination with the unknown.  The poem is also featured in the current e-pub A VISION AND A VERSE(www.avisionandaverse.com).

The group was then treated to some classic seanchai storytelling by Dan Larkin, who enthralled the assembled with a wild tale involving a pub, a pint of ale and a white cat. 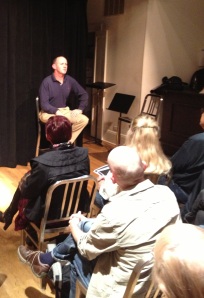 Ex-boxer and Whitey-Bulger lieutenant, John Shea, read from his memoir, Rat Bastards, The Life and Times of South Boston’s Most Honorable Irish Mobster.  He read about his code as a gangster meant that he could never inform on anyone and how he did 12 years in prison rather than rat on Whitey Bulger and his associates.  In a touching passage, John spoke about how is gangster life prevented him from having the kind of relationship and family life he wanted.

Before the break, maestro fiddler Tony DeMarco played a tune and told the audience about the New York Tradfest, a new festival showcasing the many talented traditional Irish musicians in the New York area.  The New York Tradfest took place the weekend of 10/19 and 10/20, and, by all accounts was a rousing success! 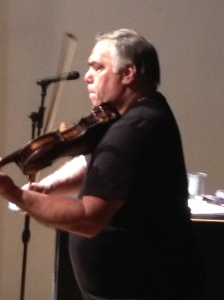 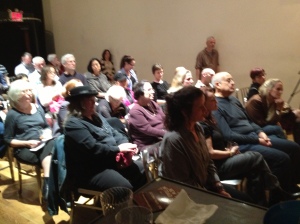 A full house at the Cell Theatre

After the break, Michele Cetera, read a story and performed a dance in honor of her father who was murdered years ago.

Mystery Writers of America member Gary Cahill then offered the opening “chapter” of his unpublished short story The Cuddle Puddle, a Hell’s Kitchen tale about the thieving of a beautiful jeweled ring from a bar patron’s final resting place — a cremation urn stored on the back bar at a shot-and-a-beer tough guy joint. Someone, please find this story a home!  Gary also read of two leg breakers looking to put the hurt on an arrogant oil baron descended from the men who paid to kill JFK in Fathers, Sons, Ghosts, Guns from the just-published Big Pulp Magazine print anthology The Kennedy Curse. Gary will be appearing at KGB Bar on E. 4th St. on Wed. Oct. 23rd at 7 pm sharp and looking to read from the Plan B Magazine Anthology Volume II at an upcoming Salon. 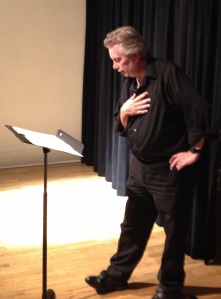 Seamus Scanlon then presented his monologue “Clap Your Hands”, which was originally part of a Dark Fable series in Jersey City directed by Mason Beggs.  It starred Paul Nugent and Anna Lane. It was a meditation on how a damaged child causes mayhem locally and globally. 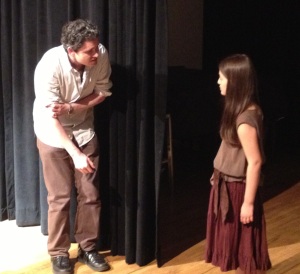 Visiting Galway writer Alan McMonagle then shared a story from his newly published collection, Psychotic Episodes. Played out over an interminable journey to the sea, “Bloomsday Bus Driver” is a teasing fable of youthful discovery involving sunshine, ice cream, a white dress, several frustrated passengers and one lusty bus driver. 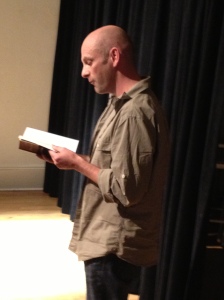 Ann Malloy McCoy followed by reading a selection from the CRITIC’S section of the current Brooklyn Rail  (www.brooklynrail.org).  The issue is about the artist who lost their work in the storm, the subject was vulnerability.

John Kearns then read his exuberant love poem called, “Let Words Be Slaves.” Some lines from the poem were heard in John’s play, In the Wilderness, last summer at the Bleecker Street Theatre.

Special musical guest Donie Carroll brought the night to a close with soulful renditions of “In the Shade of the Old Apple Tree” (from his new CD, Divil of a Noise), “If I Were a Blackbird,” and “Red Is the Rose.”  It was a warm and wonderful ending to yet another successful Salon. 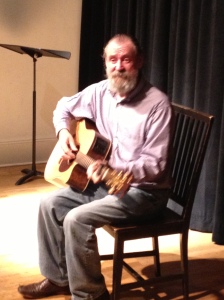 And finally, one for the road, written by the man whom we honored, by an award in his name, on Monday October 21st … “Man is born broken. He lives by mending. The grace of God is glue.” – EUGENE O’NEILL