…When She Receives Eugene O’Neill Award 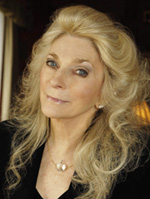 With a career spanning five decades, Judy Collins has recorded and performed with the greatest singers of her era, bringing her inimitable style to her own songs as well as to classics by the Beatles, Leonard Cohen, and Bob Dylan. She has recorded 38 albums, featuring such top-40 singles as “Both Sides Now,” and “Send in the Clowns,” and has won numerous music awards, including two Grammys. She is also an author of five books—three memoirs, a self-help book, and a novel. In 1975, she was nominated for an Academy Award for her co-direction of a feature-length documentary.

Likewise, Tom Paxton has been writing, performing and recording music for fifty years. Paxton is credited as the first to emphasize original songs in the folk music scene of the early 60s. Now known to audiences throughout the world, his songs are emotional, comical, and topical and have been recorded by artists such as Pete Seeger, Willie Nelson, and Joan Baez. In addition to his Grammy, Paxton has received the ASCAP Lifetime Achievement Award in Folk Music, a Lifetime Achievement Award for Songwriting at BBC Radio 2’s Folk Awards, and three Washington, DC Area Music Awards (Wammies).

Thomas Moran, Chief Executive Officer and President of Mutual of America Life Insurance, will speak about Judy Collins’s career as an activist.

“Judy sings like an angel but has the strength of an iron worker,” said McCourt. “Her career has been like a beacon of light, even though—as befalls us all over a full life–-she has known tragedy and despair.”

“I am thrilled and honored to be given this wonderful award named after the great Eugene O’Neill,” said Collins. “I have always believed that, in my heart, I am first and foremost a storyteller descended from a long line of Irish storytellers and balladeers.”

In addition to the speakers, IAW&A Co-Director Charles Hale will present an original short film about the life and music of Judy Collins entitled “Walls: We Are Nor Forgotten”  and Co-Director Ashley Davis will conclude the ceremony with a song.

The Eugene O’Neill Lifetime Achievement Award was established in 2009 to honor the accomplishments of a writer, actor, musician, or cultural institution that has sustained a body of work that best exemplifies the level of integrity maintained by O’Neill. O’Neill Awards have been presented to Pulitzer-prize winning author William Kennedy, actor Brian Dennehy, and Charlotte Moore and Ciarán O’Reilly of New York’s Irish Repertory Theatre. Judy Collins is the first musician to win the award.

The award, created by Tiffany & Co., will be presented Mon., Oct.15, 2012 at a generous hors d’œuvre and open bar reception and ceremony at the Manhattan Club above Rosie O’Grady’s in Times Square, just a few blocks from where Eugene O’Neill was born. Ticketing information is available at the IAW&A website.

For more information on the IAW&A, visit the organization’s website at http://i-am-wa.org/ or its Facebook page for updates and information.