By Mary Lannon with thanks to Honor Molloy

Tuesday night’s well attended IAW&A Salon hosted by the gracious and winning Honor Molloy featured a slate of new performers that along with a few stalwarts made for a lovely evening at the cell.

First, first-time presenter, Ed McCann read from his luminous memoir, Finding George.  His work has appeared in national magazines and literary journals. An award-winning television writer / producer, he’s also a longtime contributing editor at Country Livingmagazine.  This Saturday at 2pm, along with his partner Richard Kolath, he will launch Writers Read, a new literary endeavor that promotes established and emerging writers and celebrates the spoken word. 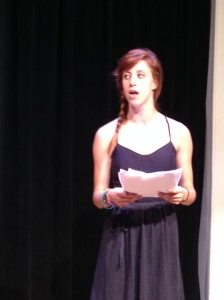 Next, Mark William Butler presented a song from his horror movie Christmas musical, Bad Christmas Sweater.  The song, “He Will Know” was performed beautifully by a IAW&A Salon first-timer, the talented actress Kelsey Walston.  With a little luck, the play will be providing audiences with a warm, fuzzy, and freaky feeling sometime this holiday season. Butler  is a playwright and composer who has had over 30 plays and revues produced in what he is now forced to admit has become a long career. 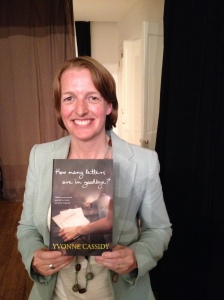 Another first-time salon presenter, Irish author Yvonne Cassidy, read from her third novel, How Many Letters Are In Goodbye? This was the first reading from the novel, which was published by Hachette Ireland on June 5th.  How Many Letters Are In Goodbye? is the story of Rhea Farrell, a young Irish girl, homeless on the streets of New York, trying to find out more about her mother who died when Rhea was only three. Cassidy, who has been living in New York since 2011, read the first letter from the book and was happy to leave the evening selling all the advance copies she’d brought with her! For more info or to see a video of the reading: www.yvonnecassidy.com.

Dublin-born musician Bernard Smith first sang “Travel On,” an original song, that he wrote after a series of events that at the time he considered catastrophic.  But when he stopped to listen to the rhythm of his own heart, he realized all of the seemingly life changing problems were just small transient ones that he could let go of. His second song, “Down in the City,” was written by Irish folk artist Sony Condell as an homage to him and because it’s a beautiful song.

Completing the first half, the multi-talented Honor Molloy presented a brief segment from The Three Christs – a new music theatre work she’s working on with composer/performer Corey Dargel. Kevin Holohan read stage directions and Joe Goodrich played Dr. Zeel—psychiatrist to the Jaysoo Trio.  Molloy is a playwright and author of the stunning novel, Smarty Girl.

Opening the second half, Kevin Holohan read two short pieces. The first was a short story about a rite of passage of a young boy in Dublin trying to gain peer acceptance of his first foray into serious swearing. The second was a short excerpt from his first novel The Brothers’ Lot, a phantasmagoric wishful vision of justice as it should have been, cataloging the physical implosion of every Church-run institution in Ireland where abuse of children took place, a piece lent added resonance and poignancy by the recent renewed media attention around mother and child homes in Ireland. http://www.akashicbooks.com/catalog/the-brothers-lot/

John Kearns read an excerpt from his novel in progress, Worlds, an “overture” to the book’s first section dealing with the Deadly Sin/Lively Virtue of Lust/Chastity.  The overture juxtaposes fragments and sentences related to Lust or Chastity from the episodes that follow in the novel about four generations of the Irish-American Logan family.  It also interspersed bits and pieces from mythology, biblical stories, and literary classics.  Later this month, Kearns will be reading with one of our favorite salon participants—Maura Mulligan—in County Mayo—his grandparents’ old stomping grounds. 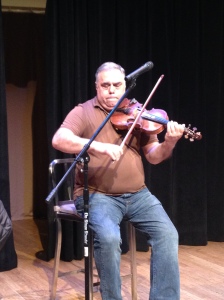 Tony DeMarco hails from an Irish-Italian family in East Flatbush. He’s been performing and teaching the Irish fiddle for over 30 years, and is acknowledged as a master of the New York/Sligo fiddle style.  DeMarco also invited the audience to the second annual New York Trad Fest to be held on October 18th at Connolly’s Pub and October 19th at the Irish Arts Center this year.  In addition, the Trad Fest will include a panel discussion hosted by Dr. Mick Moloney at NYU’s Glucksman Ireland House at 12:30 pm on October 18th. 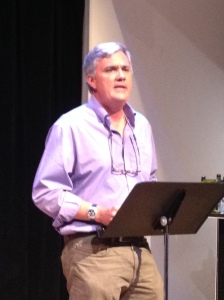 Gerry Walsh, acting on advice from Malachy McCourt, did not read but talked about his short-story collection, In The Company of Old Men, a reminiscence of laughter, fun, love, horror and aversion, tales from growing up and working around an assortment of colorful characters, sane, half-insane or one step from the Gates of Hell. Walsh spoke about growing up with death and honoring those who come before you by telling their stories.

Closing out the evening Marni Rice sang two original songs from her EP Songs for A Small Chamber, accompanying herself on accordion. Rice’s original performance works in French & English (text, music & storytelling) have been produced at Theatre festivals in the US, Canada, Europe, Japan and Central Africa. Currently, she’s working on Magdala: Stories from the Net and the Sea; a co-creation by the Xio Evans Marni Rice Experimental Dance Theatre.

See you at Bar Thalia on Wednesday, July 2nd at 7 pm!