The early May Salon at Bar Thalia was a merry and mellow affair, with members introducing brand new compositions, fictional works, and theater pieces. We were also introduced to a centuries’ old fiddle tune and Irish dance form.

Actor and writer, DJ Sharp started off the proceedings with a reading from his screenplay.

Playwright Thom Molyneaux read from his new play Miller Kazan HUAC… and Marilyn Monroe that tells the story of the creative partnership of Elia Kazan and Arthur Miller. That partnership was destroyed when Kazan “named names ” for the House Un-American Activities Committee in the 1950’s and they confronted each other, not directly, but via their art — Miller striking first with The Crucible; Kazan hitting back with On The Waterfront. Thom will be off soon for the world premiere of his play White Ash Falling 9/11 at the Detroit Repertory Theatre, the oldest professional theatre in Michigan.

Maureen Hossbacher gave a delightful reading from her untitled novel-in-progress. Set in a small parish in the midlands of Ireland, this section introduces two of the main characters, Fr. Thomas Doyle, a local priest, and his childhood friend, Desmond Long, a psychiatrist returned to his home town after years abroad. The priest’s housekeeper, Maude, steals the scene, as she contrives a subtle revenge against her employer, the supercilious, alcoholic pastor of St. Fintan’s.

Tom Mahon’s short, dramatic story was about a black family who move into a white neighborhood, and whose young son is beaten for no reason. His parents refuse to allow anything to stop them from loving and supporting their children. After years of working steadily, the black kids go to college on scholarships and make something of themselves, while the white family next door slide deeper into the cesspools of pride and prejudice.

Memoirist and dancer, Maura Mulligan, accompanied by fiddler, Marie Reillyintroduced us to Sean Nós dancing – the oldest style of dancing in Ireland. Long before Set, Céilí or the formal Step dancing, Sean Nós was popular all over Ireland. Like the Irish language, the form was stamped out and only survived in the very far corners of the country, the Gaeltacht, the Irish speaking areas. Often danced on half doors and on tabletops, this loose and free style form of dance is now enjoying a huge revival. There are no specific steps and so individual dancer must improvise. An accomplished step dancer and céilí teacher, this was Maura’s debut as a Sean Nós dancer. Check her website: www.mauramulligan.com Follow her memoir, Call of the Lark on Facebook: Follow Call of the Lark on Facebook 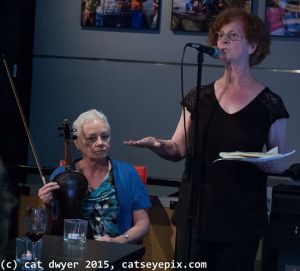 Marie Reilly followed with a lively march tune known as “Conmachne” which she told us is untitled in the manuscript dated 1846 of Thomas Kieran, a nineteenth century fiddle master from Drumlish, Co. Longford. Marie told the fascinating story of the tune’s discovery. In 1962 Pierce Butler, a fiddle player and carpenter happened to be working on the removal of a thatched roof and found the manuscript hidden in the thatch. It seemed to be a manuscript Thomas Kiernan used in teaching in the period 1844-1846. Kiernan taught widely, travelling on foot from house to house, lodging at night in the houses where he taught. The accommodation was part of his payment along with a noggin of whiskey for breakfast and a plentiful supply of his favorite tobacco. Marie’s music can be found on her website: http://www.mariereillymusic.com

Back from L.A where she is shooting a film, Maura Megan Knowles debuted a brand new, very powerful song, “Shamed & Silent No More,” written with composer Kevin McNally and accompanied on guitar by the talented John Kearns. Maura has been busy in L.A., where she did a pilot with Danny Trejo and the new ABC Family Series, Stitchers. She’s also recording songs and writing. Please visit www.mauramknowles.com for more.

Mark Butler, producer of IAW&A’s fundraiser to benefit Urban Librarian Unite introduced ULU’s Executive Director , Christian Zabriskie. ULU is grassroots advocacy group of librarians from all over the city. They bring Mini Libraries and public storytelling to the streets and parks, sponsor a 24 Read In to promote reading, and they ran a hugely successful campaign to distribute children’s books after Hurricane Sandy. ULU embodies IAW&A’s mission of fostering access to the arts and education. We think this could be the start of a beautiful friendship.

The Amazing Library Variety Show. May 19 at 7pm at The Cell. Donation $25; all proceeds will go to ULU. Reserve now at amazinglibraryshow@hotmail.com 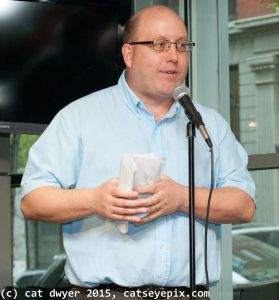 Salon host John Kearns shared a brand-new excerpt from his novel in progress, Worlds. Writing in his journal, Paul Logan tells the story of meeting a childhood friend, Joe Boyle, at his mother’s wake in Ardmore, PA and then running into Joe again at Bowling Green in New York.  We’ll get to hear about the encounter between these two old friends at the next IAW&A Salon. 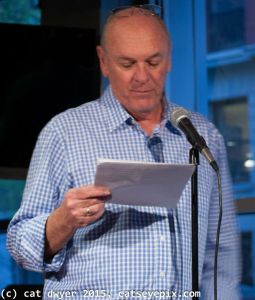 Novelist and short-story writer, Kevin R. McPartland held the Salon crowd in rapt attention as he told a tale of old Brooklyn meets new Brooklyn with a looming eviction from a basement apartment at stake, a story that indeed had an interesting, comical, and poignant plot twist at the end.

We got to enjoy John Paul Skocik performing three original tunes, two of them performed for the very first time anywhere. “Masquerade,” a happy sounding pop piece attempts to musically conceal the sardonic and self-loathing lyrics of an unrequited love. Next was a snippet of the unfinished “Cocktail Hour,” sung a capella, and inspired by Frank Sinatra’s contribution to the great American songbook. John premiered the rough, comical and lyrically sentimental punk styled tune “My Place.” It tells the brief tale of a man frustrated that he can’t be more to the woman he loves, yet he is also frustratingly content that he at least has what he has. Find John’s songs on iTunes and other online outlets, under his former band Girl To Gorilla. 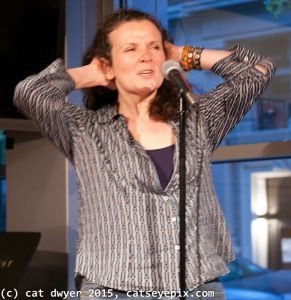 Guenevere Donohue sang a gorgeous new composition that she wrote for the children of Palestine. Guen was inspired and moved by hearing that one of those children said “I have never seen the sea,” and she composed a song with that title. You can see the kids’ painting for Rogue Foundation’s I Am Palestine: “I Have Never Seen the Sea” Exhibit at the Chelsea Fine Arts building.

Prompted by Guen’s lovely song, Malachy McCourt recounted a not-so-lovely childhood memory of a promised trip to the sea that didn’t happen. He closed the night leading us with, “The Sea Around Us.” 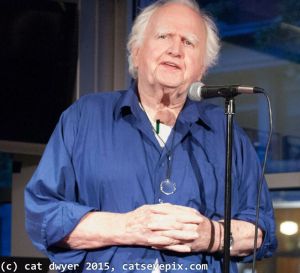 “The sea, oh the sea is the gradh geal mo croide.
Long may it stay between England and me.
It’s a sure guarantee that some hour we’ll be free.
Oh thank God we’re surrounded by water!”

Don’t forget: The “Special Edition Salon” The Amazing Library Variety Show. May 17 at 7pm at The Cell. Donation $25; all proceeds will go to ULU. Reserve at amazinglibraryshow@hotmail.com.