Christmas made an appearance in several presentations Dec. 19th as Irish American Writers and Artists celebrated the holiday with a salon at the cell and much merriment at the after party.

Early on in the evening Christmas featured in Bernadette Cullen’s reading of her own three poems and one of the Nativity poems by Joseph Brodsky, the  Russian poet.  Arriving in the U..S. as an involuntary exile  in 1972 Brodsky began writing a nativity poem every Christmas.

Also in the first half, memoirist and Céilí dance teacher Maura Mulligan presented “Oíche Nollag” (“Christmas Eve”) by Eoghan Ó Tuairisc. As well as poetry, Ó Tuairisc wrote a number of novels in Irish including L’Attaque about the French military adventure in Mulligan’s native County Mayo in 1798. He also wrote verse in performance-friendly style such as “Oíche Nollag,” which Mulligan recited in both English and Irish. Accordionist Marni Rice, who composed music depicting, lines such as . . . “the sharp nails of the rain on the roof, fingering a tune,” accompanied her. During the recitation of the original Irish- language version, Rice played the traditional Irish carol, “Don Oíche Úd i mBeithil.” 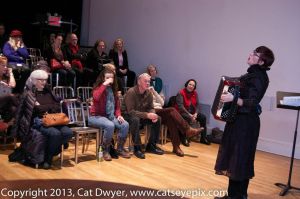 Noting the connection of the season and peace, the versatile Marni Rice also read two poems about peace from a collection entitled, It’s Not the End of the World, which she began writing on December 21st, 2012.  She also sang an original song called “Pub Tune” from her EP,  Songs for a Small Chamber. 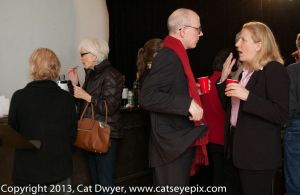 After the break , Guenevere Donohue got the crowd into the holiday spirit with her very own Christmas song, “Green and Red Stuff.” She also sang Jackson Browne’s “Rebel Jesus,” accompanied by our extraordinary MC John Kearns on guitar. This was John’s Salon debut on guitar.

Continuing the holiday theme, the estimable Honor Molloy brought to life the sounds and the smells of Christmas Eve 1966 on Moore Street—Dublin’s open-air market where market women hawk their wares. Her character, Noleen O’Feeney, goes wandering among the stalls. Honor brought the house down with her reading of the shawlie’s tale of the Baby Jesus and the little oranges!

Other presenters offered gifts of their work on other themes.

The talented Tom Mahon read Chapter 10 of his novel in progress American Mastery.The Fenton brothers are given round-trip tickets to Tokyo, but Vietnam War veteran Charlie is petrified of flying and can’t sleep.  He remembers back to 1970 when at mass his brother Raymond denounced the congregation and the priest for letting Nixon bomb Cambodia without a word of protest. He can’t reconcile what he did in the war and what he knows is still happening and getting worse. Kudos to Tom for coming to present at the IAW&A Salon after having partial knee replacement surgery!

Presenting a brand-new excerpt from his novel in progress,Worlds, John Kearns read about Father Sarsfield Logan’s return home for his father’s funeral.   Sarsfield’s youngest sister, Kitty, complains to her Jesuit brother that their siblings had begun taking items belonging to their father before he passed away.  Though Kitty couches her outrage over this in terms of its immorality and shamefulness, it soon becomes clear that she is worried that she has not gotten her fair share of her father’s belongings. 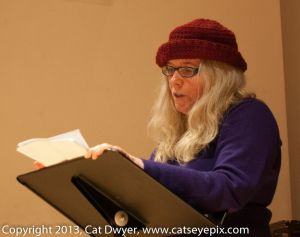 Mary Lannon read the beginning of a short story, “The Key to Catastrophe Management,” about art weather, and young love(they really are all related!).

Kathy Callahan read from her recent IAW&A blogpost about Sinead O’Connor’s recent concerts in the3 New York are and told a story about a pedophile priest from the parish she grew up in.

Member Kevin R.McPartland read an excerpt from a short story entitled,” Lost Loves.” In the story, we are taken to a small town just south of Atlantic City and introduced to a cast of fascinating characters whose lives intersect in a local bar called the Anchorage Tavern. All in attendance loved the story and Kevin promised more to come in future salons.

The versatile Don Meade, leader of the Blarney Star concert series and the Landmark Tavern sessions, ended the night playing a slow air on harmonica followed by a set of reels. He then concluded the evening with an a capella version of, “Muldoon, the Solid Man.”

Merry Christmas and Happy New Year!  See you at the Thalia on January 7th!