John Skocik, lead singer and songwriter from Girl to Gorilla, led off the night with a couple of original songs. John and the band will be playing gigs in New York City this summer.  Watch this space for more information.

Our first writer of the night, Tom Mahon, read a “Doctor’s Story” from a collection of stories called Delusions.  In the piece two people’s dreams come true, yet the doctor is outraged to learn that society pays so much more to its entertainers than to its health care providers, especially its surgeons.  Other stories in the collection explore the questions of whether delusions are real if a person sees them turn out to be real and whether delusions that become real result from skill, luck or the will to bend reality to a vision.

Next up our gracious  and talented host, John Kearns, read two excerpts from his short story, “Making a Visit,” about a man named Terrance who, because of a song that reminded him of his mother, stops into a church on the evening that he plans to commit suicide.  During his visit, Terrance reflects on several memories of his mother and of Saint Patrick’s Days past.  After depositing all of the money he had in the poor box, Terrance leaves the church and runs into some street musicians performing one of his mother’s favorite songs.  When the musicians ask him for a contribution, Terrance agrees to bring the money the next day, and he walks away laughing.

Mary Lannon read from the middle of a short story called “A Key to Catastrophe Management” about a college senior who becomes obsessed with the weather while trying to figure out art and love.  Lannon is also working on publishing a novel.  Learn more about it and like her Facebook page at MirandajMcleod.com

The multi-talented singer-songwriter Tara O’Grady, who recently signed with a literary agent in Hollywood, next read an excerpt from her memoir Migrating Towards Happiness. The humorous piece reveals a frustrating conversation Tara had with a priest on the day of her Donegal granny’s death, and a dream she later had when she found herself in the biblical Garden of Gethsemane. Tara’s full swing band will be performing at a FREE outdoor swing dance Wednesday, June 11 for the Brooklyn Public Library Summer Series, dance lesson 6:30pm and music 7:00-8:30pm. 10 Grand Army Plaza, Brooklyn. www.taraogradymusic.com.

Marni Rice ended the first half of the evening by singing two songs acapella.  She led off with “On Raglan Road” (Luke Kelly/Patrick Kavanagh) and “The Month of January” (traditional song from Sarah Makem songbook).  Salon regulars may not have been surprised to learn that these songs marked a return to the talented Rice’s roots as she spent her early years hanging out at the library memorizing folk tunes.

Jim Rodgers returned to the IAW&A Salon and read a short story set in Sunnyside.

Most of the second half of the salon showcased  former students of Brendan Costello at City College. 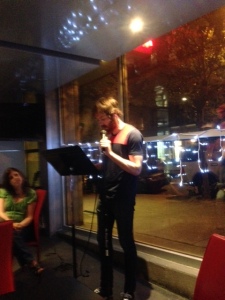 Poet and musician Conor McGlone read a selection of poems that were linguistically dense and brimming with a brooding intensity.

Bronx native Jordan Ortega read an engaging selection from a novel in progress, about a detective who awakens from a coma and discovers he no longer needs to sleep.  In addition to being an excellent writer, Jordan is also captain of the CCNY Basketball team (this may be a Salon first!).

Megan O’Donnell is an actor, activist, and award-winning writer of poetry, fiction and non-fiction.  She read a selection of poems on numerous subjects, including violence against women (the focus of her activism) and an emulation of Emily Dickinson.

We look forward to hearing more from these talented young writers, particularly now that there’s a new student rate for the membership!] 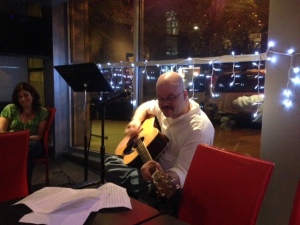 Brendan Costello Jr. followed with a selection from a novel in progress, about an executive who whiles away time in his office dreaming about the apocalypse.  He closed with an interpretation of the Kinks’ “Sunny Afternoon,” which he described as the musical equivalent of his character’s sentiment that “This is the day the Lord has made, let us prepare for a cleansing fire.”

The evening ended with Jack DiMonte singing two songs of summer.  He began with a sad song of regret over a missed romantic opportunity at a seaside that began life as a French song called “C’est Te Moi” by Alfred Vidalin and Gilbert Becaud.  American lyricist Norman Gimbel, who also wrote English lyrics to many Bossa Nova classics, wrote the English lyrics, and it became “It Was Me.”   The second song was a much happier take on summer love, “That Sunday That Summer” by Joe Sherman and George David Weiss, a hit for Nat King Cole in the early 1960s that was later revived by his daughter Natalie.