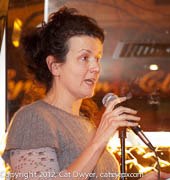 If the IAW&A’s first Salon of 2013, held at Bar Thalia on January 8th, is any indication, it is going to be a great year for the organization, which marks its 5th anniversary in March.

TJ English, President of the IAW&A, began the evening by speaking about the amazing breadth of talent showcased at the Salons, and how they will continue to evolve in the coming year. 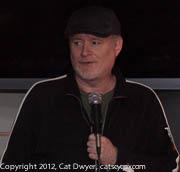 Then Kevin Holohan, author of novel The Brother’s Lot, kicked off the performances by reading a short story that more than lives up to the bite of its title, “Team Players for the New Economy” a grotesque satire on solipsistic corporate culture and groupthink and aims to be a tonic for anyone who has ever had the misfortune to work anywhere larger than two people and a fax machine.

Guenevere Donohue, playwright, actress, singer, and poet read two poems, one about the beach and one about her great-grandmother titled The Butter Witch. She then graced the room with a song.  Kathleen Donohoe read an essay about the day she realized she was a writer, two weeks after her eighth birthday, particularly fitting as she just finished her novel three months ago–on her birthday.

Next up was Mark Butler with a new story about the imagined life of promotional mascots working the sidewalks of Times Square called Mickey Mouse Is a Mexican.  It is an installment of what eventually will be a collection of short pieces entitled Talking to Yourself on the Streets of New York.

John Kearns, whose cousin Siobhan Regan from Mayo was in the audience  (Up Mayo!), read an excerpt from his novel-in-progress, Worlds, in which Paul Logan, a 30-something Irish-American, Gavin, a drunken Englishman, and Stephanie, their barmaid and driver, are traveling through the Financial District, trying to find their way uptown.    As they drive along John Street, Paul reminisces about the night he met Stephanie. Interspersed among the events and reminiscences is a parody of stock-market jargon, describing the relationship between Stephanie and the men competing for her attention.

Singer, actor, and humorist Rachel Bouton performed a short story she wrote entitled “My Doorman is a Homeless Dude Named Frank” and sang the song “Homeward Bound” by Marta Keen Thompson. Rachel was the only presenter to use the phrase “bed bug farts.”

After the break, Maura Mulligan, author of Call of the Lark read the poem BEANNACHT (blessing) from the late John O’ Donohue’s collection: Benedictus.  O’ Donohue is the author of the international bestsellers Anam Cara and Echos of Divine Beauty. Here is BEANNACHT: http://www.youtube.com/watch?v=ZhMCBnwS220

Next Maureen Hossbacher took the mike to deliver two of her poems.  In counterpoint to Kevin Holahan’s hilarious opening story, the first poem, entitled “Okay” was a powerful expression of her frustration with the creeping influence of corporate amorality over the past few decades.  Maureen followed that with “Lesser Known Saints,”  a droll tribute to the ancestors, stand-ins for former sainted superstars such as Christopher and Philomena.

Jim Rodgers followed with an excerpt from his novel “Long Night’s End.” The protagonist, Johnny Gunn, angry and bitter over the tragic death of his friend Jimmy, proceeds to take on an entire Greek soccer team along with the referee during a weekend match. After being pummeled, evicted, and banned from the league, Johnny returns home to soak his wounds in a hot bath, hiding from the world and wondering why God has abandoned the good people of Sunnyside.

Kathy Callahan told rather than read a story from personal professional experience that vividly brought into the room the lives of the often invisible and marginalized and reminded us that such lives are complex, multi-faceted and even in direst adversity, hopeful. The immediacy of the story was very affecting.

Jack DiMonte introduced the song he sang by explaining that it is a Peter, Paul and Mary song—but an unusual one for them, “Whatshername,” a comical take about a man trying to remember the name of a long-lost love.

Then Malachy McCourt took to the stage with a very prescient poem he wrote after President Obama’s election in 2008, about the difficulties he was going to face in the next four years. As ever, he brought the evening to a rousing close with a song, “Oh, Boy, What Joy We Had in Barefoot Days.” 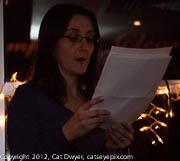 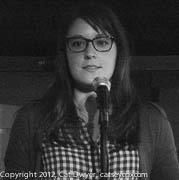 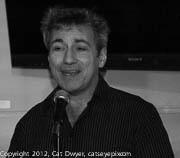 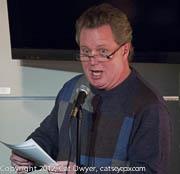