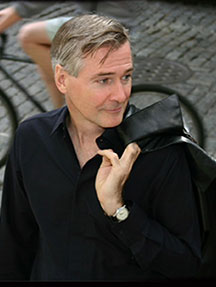 I am not Irish. I am Irish-American. Some say I have the gift as well. If I do, it is because I listened to my father and my uncles and some of my aunts as they gave as good as they got in my living room in the Bronx. On many’s the Saturday night, they would drink rye and ginger ale, and smoke and talk and sing and dance, and I would sing, too, and dance with my aunts, and listen through the blue air. And because I listened to so much talk and so much music, perhaps I was spared somehow from the truly unfortunate fate of being an uneloquent Irish-American.

My father played a very particular accordion. It had his name spelled out in rhinestones, and emblazoned over his name, the crossed flags of Ireland and America, also in rhinestones. It was a wedding present from somebody, grandparents I think. All my grandparents were Irish and had died before I was born, so they melded in my mind into a kind of monolithic ancient green mush. My father played many Irish songs on this squeezebox, and Elvis Presley’s “Love Me Tender.” When he sang it, it was the most Irish song of all.

When I went to Ireland for the first time, in 1993, I was 42. My father was in his late 80s, and I went with him to visit the family farm outside the village of Killucan, near the town of Mullingar, in County Westmeath. I had just gotten my New York driver’s license a few weeks before, and I was a hideous driver. I had to drive for 100 miles on the wrong side of the road. Periodically, my father would say “Watch out!” as I was seconds from killing us both. By the time we got to the farm, I had lost a side mirror and was in a poor emotional condition.We turned into the rustic dirt driveway. The farm looked completely dead. I could see a couple of motionless sheep on a Cdistant ridge – otherwise, nothing. I rolled my rented car down to the farmhouse and shut it off. The silence was so complete I could feel it on my skin.

I knocked. The door was opened softly and with caution. Looking at me was my cousin Anthony. His eyes burned with a mad blue intensity. He greeted us quietly and in we went. In the house, which we entered by way of the kitchen, were stacks of people, all close relations.

No sooner had we cleared the door than all hell broke loose. My Aunt Mary was sitting by the turf stove, leaning on a cane. She let fly with a vigorous speech, not one word of which I could understand, though she was apparently speaking English. Her husband, my Uncle Tony, turned out in a Greek fishing cap, white shirt and weathered vest, was waving a pipe. He had electric blue eyes as well, the eyes of a malamute, and a crafty, gleeful expression. He, too, was holding forth, and although I could not understand a word of what he was saying either, his accent was utterly different than that of his wife. He spoke in a measured and forceful tone, while Mary’s declarations came out at the rate of water gushing from a fire hose.

The one linguistic quality they shared was emphasis. Each and every thing they said was said with an air of such conviction it seemed impossible anyone could disagree. And yet, they did disagree, and attempted to shout down and dismiss every statement made by the other.

Uncle Tony and Aunt Mary weren’t the only ones speaking in this small country kitchen, which smelled of brown bread, oatmeal, pipe smoke and turf. Several cousins were present and also speaking. Some were shouting that we must be exhausted, in shock from the severity of our journey, or hungry, or in need of a chair. At least, these ideas were ones I thought I could pick out.

My father watched all this with a serene expression. He had been coming here for many years, in addition to having been born here, and none of this, I suppose, was new to him. It was perhaps 10 in the morning. Miraculously, a gap appeared in the conversation, and my cousin Audrey managed to ask if we would like breakfast. My father said he would like a drink of whiskey and sat down.

There was no lighting. That is, there were lights, but not one of them was turned on. One small window let in the few photons that had survived the rain and clouds. These heroic if anemic lumens shouldered the full task of illuminating the kitchen. It was not enough.

Basically, what I was experiencing was a pack of Irish people shouting in the dark.

I sat down by my father in the gloom, refused a drink of my own in favor of tea and oatmeal, and asked if there had been a power failure. This set off a series of denunciations and exhortations about the light switch, which was finally thrown by my cousin Anthony as if he were setting fire to the national treasury or electrocuting the only woman he had ever loved. When the light came on, Anthony recoiled from its rays. He squinted and dropped his eyes to save his retinas, I suppose, from incineration.

Unfortunately, this tactic caused him fresh disturbance. Because now he cried out in horror that the floor was a disgrace, that it was crusted in muck and alive with dust. I looked at the linoleum floor and saw nothing. He got a broom and began to sweep like a demon, relatives leaping out of his way. I said the floor was perfect as it was. He told me that I was mad, nothing less than unstable and possibly dangerous. I decided to eat my oatmeal and shut up. My father sipped his whiskey with a peaceful expression.

A dog named Flossie looked on in perfect contentment. Uncle Tony, sitting in a ripped vinyl chair that looked as if it had been salvaged from a demolition site, murmured to Flossie a nonstop stream of endearments while he scratched her ears and sucked on his pipe. From time to time, when the conversation threatened to become manageable, Tony would pause from doting on Flossie to shout down a son or daughter, observing that they had never had a single clear thought since being born. A cat walked through, her claws making sounds like tiny high heels on the linoleum, her coat glowing like mink.

Scarcely had I finished my oatmeal when Anthony said I should come with him. I obeyed and out we went through the yard and got in his battered Land Rover. He had offered to take my father as well, but the old man was comfortable in the warm kitchen, and it was a grim morning, chill and wet, out of doors.

I had no idea where we were going, and mostly I didn’t care. Anthony was about my age. His chest stood out with muscle from years of farm work. He was a strange mixture of calm and storm. In fact, all of them were. It was an odd fact that though they lived in the middle of nowhere, with utter silence around them as thick as mittens, they all seemed to be somehow overstimulated. The scene in the kitchen had been pandemonium. It had felt like some kind of riot. I was relieved to be in the car, with only Anthony’s occasional comments interrupting the drum of the rain. We went through a little town and pulled up by a church.

We got out and Anthony led me around back to a graveyard. The rain was falling at a good rate, but he seemed not to notice. He had on some kind of thread-bare field jacket. I followed him until he stopped at a substantial forbidding Victorian tombstone that looked like the door to rot and doom. It was engraved with my name: SHANLEY. I felt the letters like a verdict I would not survive. This was my grand-parents’ resting place.

He invited me to kneel down in the rain and pray, and did so himself. On my own, this would not have been my first instinct. We knelt side by side, on black gravel, praying before a black stone that looked strangely like the slab in 2001: A Space Odyssey. I don’t know what I prayed for or to. It may have been for an umbrella. I had never met my grand-parents, so I had no image or emotional connection to draw on. But kneeling there in the rain, I felt a bond with something dreadful and grand, and I had this thought: These are my people.

Over the course of days, I asked for stories about my grandparents. You would think that when dealing with people who talked this much, getting information would be easy, but no. When the subject of my grandparents came up, a sudden circumspection would overcome the source. Tony would look vague. My father would become reticent. My cousins would claim to know nothing. Even my Aunt Mary, who talked like Proust wrote (that is, endlessly), even Mary had little to say.

There was a reason. It seems my grandparents had been, at the very least, scary. My grandfather had gotten along with no one in his family except my father. Even the animals would run away from him. When he wanted the horse, he would have to hide in the house while one of his sons fetched the animal, because if the horse saw my grandfather, the horse would be gone. My grandmother was obese and quarrelsome. My grandfather constructed barns and furniture, and then my grandmother would gleefully criticize his work until he exploded. They fought constantly, throwing stools, buckets and whatever else was free. When my grandmother was presented her first grandchild, my sister Kathleen, she tore the pretty bonnet the baby wore off her tiny head, declaring: “It’s too good for her!”

When she died, they had to take the banister off the staircase from her bedroom. Such was her girth.

It took many conversations for me to gather this unfortunate news about my predecessors. My living family were solid people and thought it wrong to speak ill of the dead. This was the reason their talk became evasive and cloudy when the subject was raised. It was only over the course of many days that a portrait of the couple emerged. They had been poor, illiterate and vindictive. I wondered how such wonderful eccentric folk as I saw around me were able to spring from such impoverished ground. I never got an answer to that.

Life holds its miracles, good erupting from darkness chief among them. – JPS