“I have always believed that, in my heart, I am first and foremost a storyteller descended from a long line of Irish storytellers and balladeers.”   Judy Collins 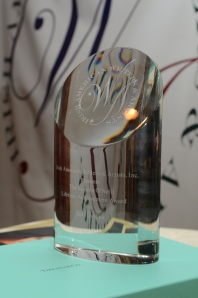 On Monday, October 15, 2012, in the middle of the one of the year’s great celebrations, the The Irish American Writers & Artists Eugene O’Neill Lifetime Achievement Awards Celebration, 93-year-old folksinger, songwriter, and fighter for civil rights, peace, and the environment, Pete Seeger, stood strumming his enduring banjo before a hushed audience of over 200. 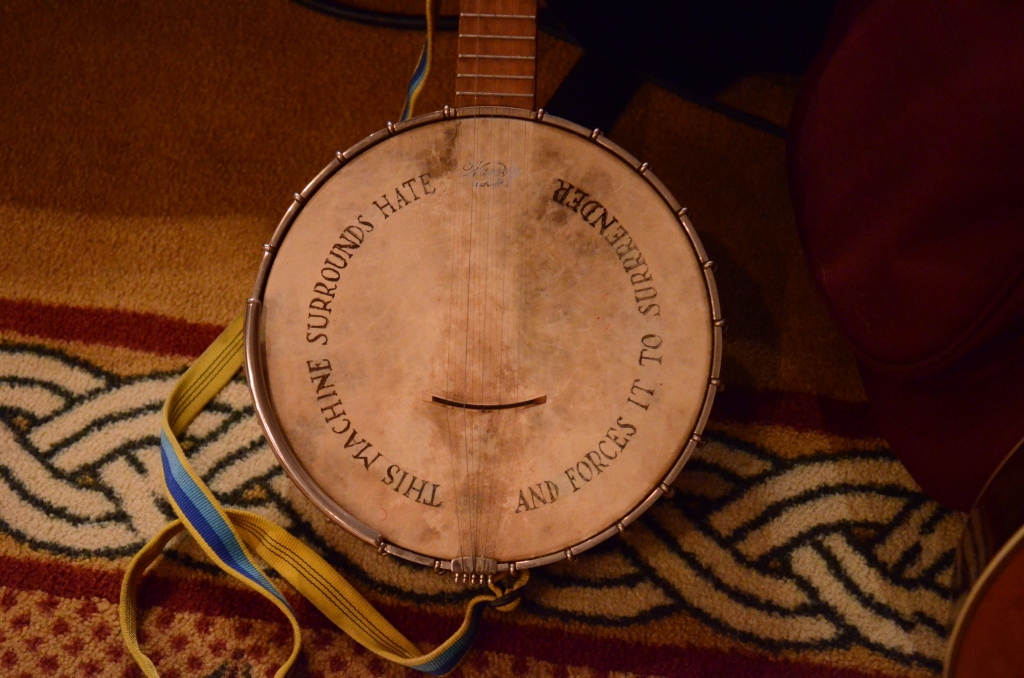 “If the world is still around in another 100 years,” he declared, “it will be because of the arts.”

And the large crowd in attendance at the Eugene O’Neill Lifetime Achievement Award at the Manhattan Club above Rosie O’Grady’s on a rainy Monday night was testament to the truth of Seeger’s declaration.  The crowd, representing all genres of the arts, had gathered to celebrate Judy Collins’s lifetime of artistic achievement and to show its commitment to further such achievement.  The spirit of inspiration, encouragement, generosity, and cross-pollination was abundant in the friendly atmosphere of the Manhattan Club.  Indeed, Judy Collins’s long-time friend on the folk music scene, Tom Paxton, was on hand to honor her, as was Pete Seeger.  Even the City of New York showed its support for the arts: City Council Speaker Christine Quinn issued a special proclamation in honor of the event.

In keeping with the musical theme of the evening, Black ’47 bandleader, author, and playwright, Larry Kirwan, acted as Master of Ceremonies.  Larry got the ceremony started by introducing IAW&A President, T.J. English. 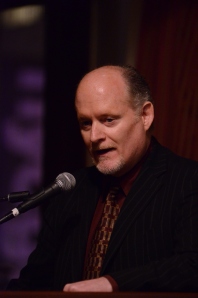 T.J. who has taken over the presidency from Peter Quinn, apologized for not being as eloquent as his speech-writer predecessor.

“While Peter was writing about ‘a shining city on a hill’ for Mario Cuomo, I was saying, ‘Get the fuck out of my cab.’” 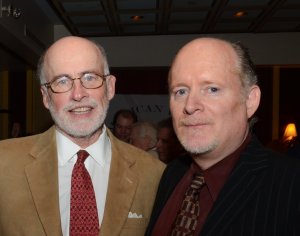 TJ updated the audience on some of the progress made by the IAW&A over the past year, in particular the burgeoning success of the semimonthly Salons at the Café Thalia and the Cell Theatre.  These evenings have become so popular that IAW&A is preparing a third monthly gathering of artists to share their work with one another.

T.J. also talked about the mission of the IAW&A and of the Eugene O’Neill Lifetime Achievement Award.  The Eugene O’Neill Lifetime Achievement Award was established in 2009 to honor the accomplishments of a writer, actor, musician, or cultural institution that has sustained a body of work that best exemplifies the level of integrity maintained by O’Neill.  O’Neill Awards have been presented to Pulitzer-prize winning author William Kennedy, actor Brian Dennehy, and Charlotte Moore and Ciarán O’Reilly of New York’s Irish Repertory Theatre.  Judy Collins is the first musician to receive the award.

However, the IAW&A president added, there is another purpose of the award that might not be found in its official description.  By recognizing an individual such as Judy Collins who, with her 38 albums and five books, has spent a lifetime as an artist, the Eugene O’Neill Lifetime Achievement Award can inspire others to forge a career in the arts, a career for which “there are no entry-level positions and there is no blueprint.”

Larry Kirwan next introduced Tom Moran, Chief Executive Officer and President of Mutual of America Life Insurance.  Tom began by saying, like T.J., he had been a New York City cab driver.  But, unlike T.J., before chasing customers out of the cab, “I always made sure to get the tip.” 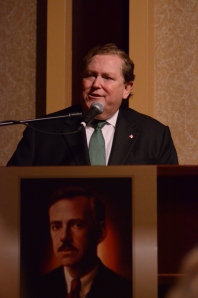 Tom Moran said that he has no talent himself but he does have the ability to listen — not only with his ears but with his heart.  Listening with both ears and heart, Moran explained, was necessary to appreciate the beautiful voice and the soulful emotion in the music of Judy Collins.  He also praised Judy Collins’s work for Concern Worldwide, the Irish charity of which he is chairman.

Introducing IAW&A Co-Director Charles Hale, Larry Kirwan attributed much of the success of the Salons to the welcoming atmosphere created by Charles whom, Larry recognized for being particularly good at encouraging first-time presenters.  Charles introduced and showed the original short film he created with Lucy Matthews Heegaard about the life and music of Judy Collins, “Walls: We Are Not Forgotten.” Watch the video.

The film, featuring the Judy Collins’s voiceover taken from Charles’s interview with the folksinging legend, takes us through Collins’s life from childhood to the present, focusing on her mother and father, her son, her music, and her work for peace.  The soundtrack on the film features the soaring song “Walls: We Are Not Forgotten” composed and sung by Collins with lyrics from a poem by her husband, Korean-War-Memorial designer, Louis Nelson.

“Everyone at their heart is in some ways Irish, I’m convinced,” Collins says in the film, “because there’s a piece of all of us that has this deeply wounded place that needs to be healed by music.  The Irish do that all the time.”

Before bringing Peter Seeger to the stage, Larry Kirwan told the story of how he first met the indomitable folksinger in the ’70s, when Seeger was beginning his campaign to clean up the polluted Hudson River.  Larry recalled playing some concerts near Seeger’s hometown, which did not always have the most receptive audiences.  As a young man newly arrived from Ireland, Larry marveled at Seeger’s determination to change things and his confidence that his effort would succeed.  Seeger’s career, Larry stated, reminds him of the words of Bobby Sands, “Everyone … has their own particular part to play. No part is too great or too small; no one is too old or too young to do something.”

Pete Seeger did not make a speech. 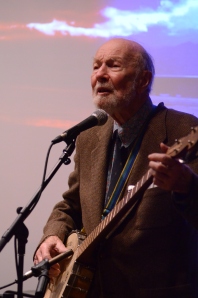 Instead, he strummed his banjo and softly sang, “Quite Early Morning,” about the power of song to inspire the next generation to sing and play and to fight for justice.   Seeger’s voice is not as strong as it once was, but his spirit certainly is, and he had a full house willing to join in with him.

“And so keep on while we live

Until we have no, no more to give

And when these fingers can strum no longer

Hand the old banjo to young ones stronger … ”

I don’t know of any “young ones stronger” who can take up Pete Seeger’s banjo when he finally grows too tired to play.  But, perhaps the song did inspire some younger artists listening, as T.J. English suggested the Eugene O’Neill Award has the power to do, and as Peter Seeger has done for decades.

“I know that you who hear my singing

Seeger exhorted us to keep the song going.  With considerable gusto, the 93-year-old urged us to sing it, “One more time!”

Growing up in Wexford, Ireland, Larry Kirwan said he wanted to play the guitar like Jimi Hendrix.  Then one day, he turned on Radio Telefis Eireann (RTE), the only channel available on his black-and-white TV at the time, and saw a man alone on stage playing a quiet acoustic guitar and singing.  The singer, Tom Paxton, revealed to Larry a new type of communication between artist and audience and Larry realized that music did not have to be “blasted out” to be effective.  After this story, Larry got the crowd to sing a few bars from Tom Paxton’s “The Last Thing on My Mind.”

Tom Paxton took to the stage with his guitar, and he did sing “The Last Thing on My Mind.”  However, he first sang a song about falling in love simultaneously with a woman and with Ireland. 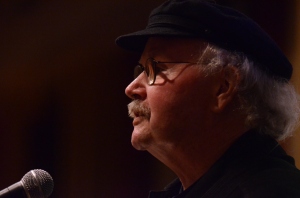 Finishing the tune, he quipped, “Never let it be said that I don’t know how to pander to an audience.”

When Paxton did perform “The Last Thing on My Mind,” a song beautifully recorded by Judy Collins, the Manhattan Club crowd sang along with him.

Using a slang term, he picked up in Ireland and the U.K., Paxton paid Judy Collins the tribute of dubbing her a true “muso,” or a “lifer” dedicated to the creation and performing of music.

Next up was the man that Larry described as needing no introduction, IAW&A Co-Director, Malachy McCourt. 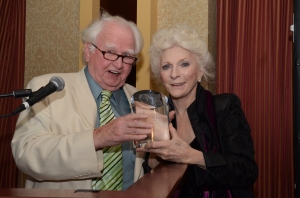 In presenting Judy Collins with her Eugene O’Neill Lifetime Achievement Award, created and donated by Tiffany & Co., Malachy thanked Judy Collins for being a true friend and a treasure throughout the many years that he has known her.  He jokingly wished that she would become a Mormon so that she could welcome him as a second husband. 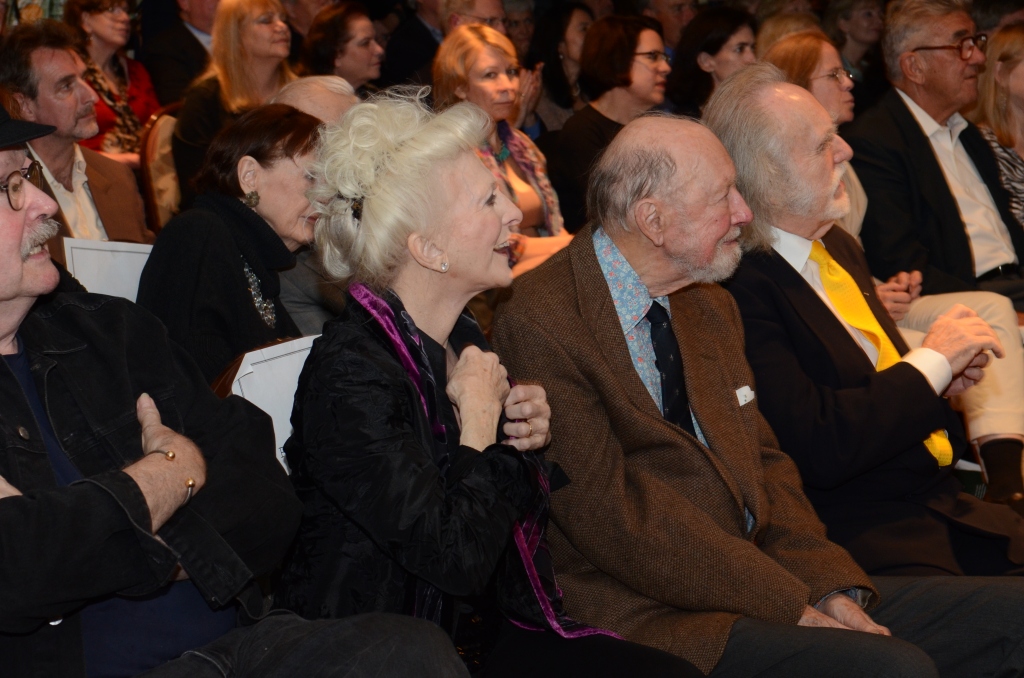 Judy Collins happily accepted the award and thanked and hugged Malachy and Larry.  She spoke of how happy she was to have her name associated with the great Eugene O’Neill and agreed with Pete Seeger’s assertion that whatever future we will have will be because of the arts.  Interspersing bits of a cappella singing, Collins told amusing tales about her career and about how she met her husband. 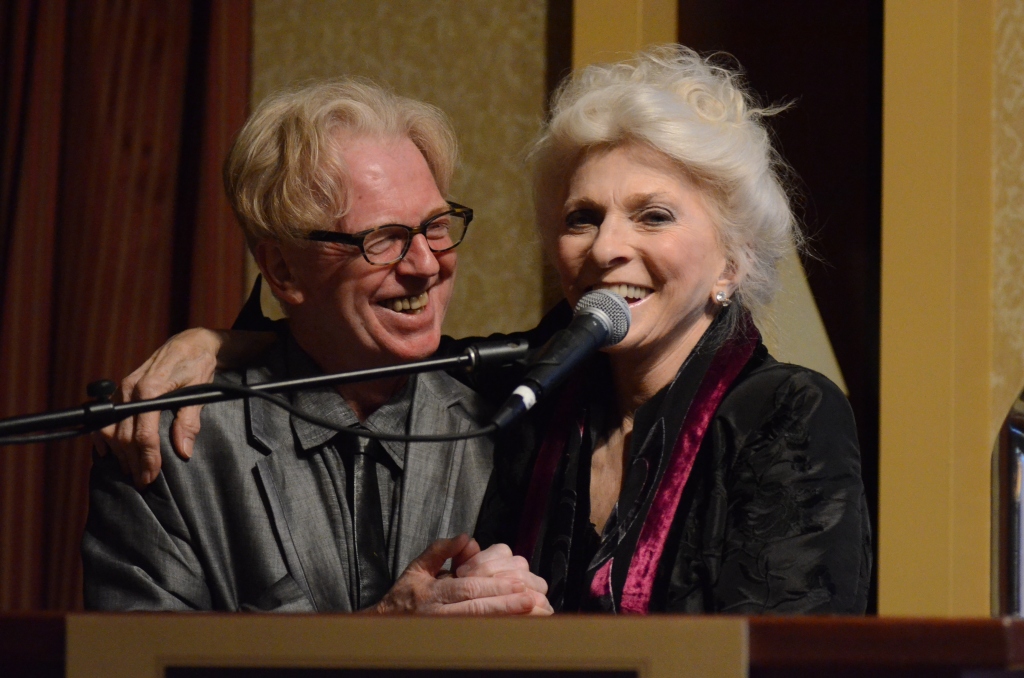 To wrap up the ceremony, Co-Director Ashley Davis gathered Pete Seeger, Tom Paxton, and Judy Collins on stage to sing, “Will You Go Lassie, Go?”  The audience, of course, was very willing to help out.

Then it was back to the socializing at the open bar with generous hors d’œuvre that kept coming and coming.  Novelists, musicians, poets, actors, filmmakers, photographers, illustrators, and artists of all stripes made and renewed connections well past the party’s official closing time.  Here’s hoping that they also renewed their commitment to keep the music going, until their “fingers can strum no longer.” 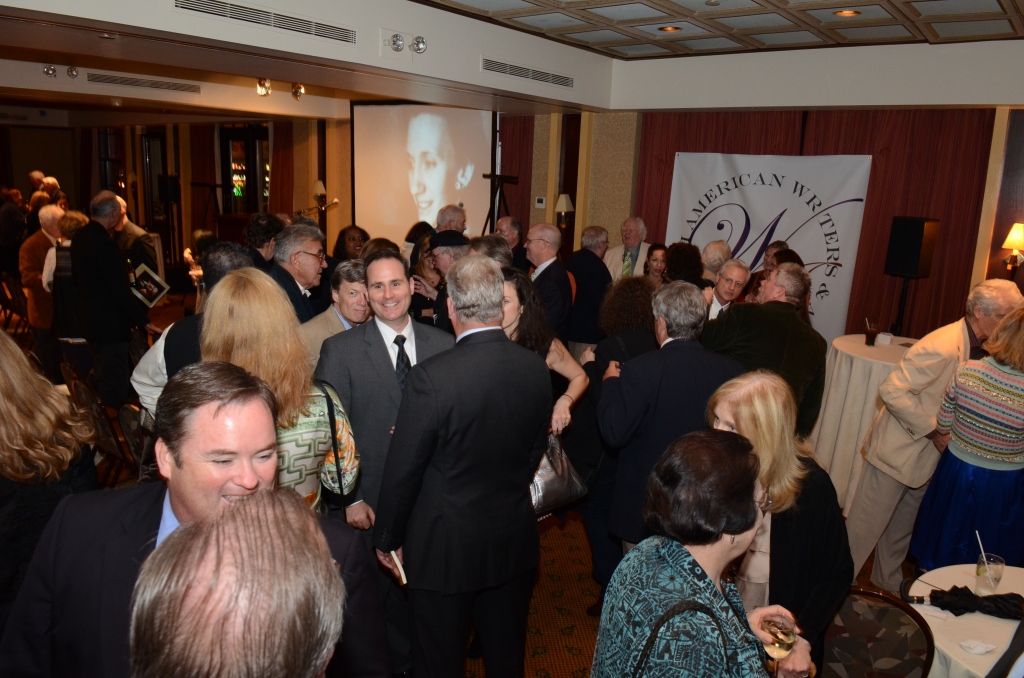 Congratulations to Judy Collins on her Eugene O’Neill Lifetime Achievement Award!  Judy Collins believes she is from a long line of storytellers and balladeers.  A line that’s still being drawn …

And a special thanks to all our patrons, advertisers, supporters, volunteers, presenters and to the great crew at Rosie’ O’Grady’s Manhattan Club for making this event such a success! 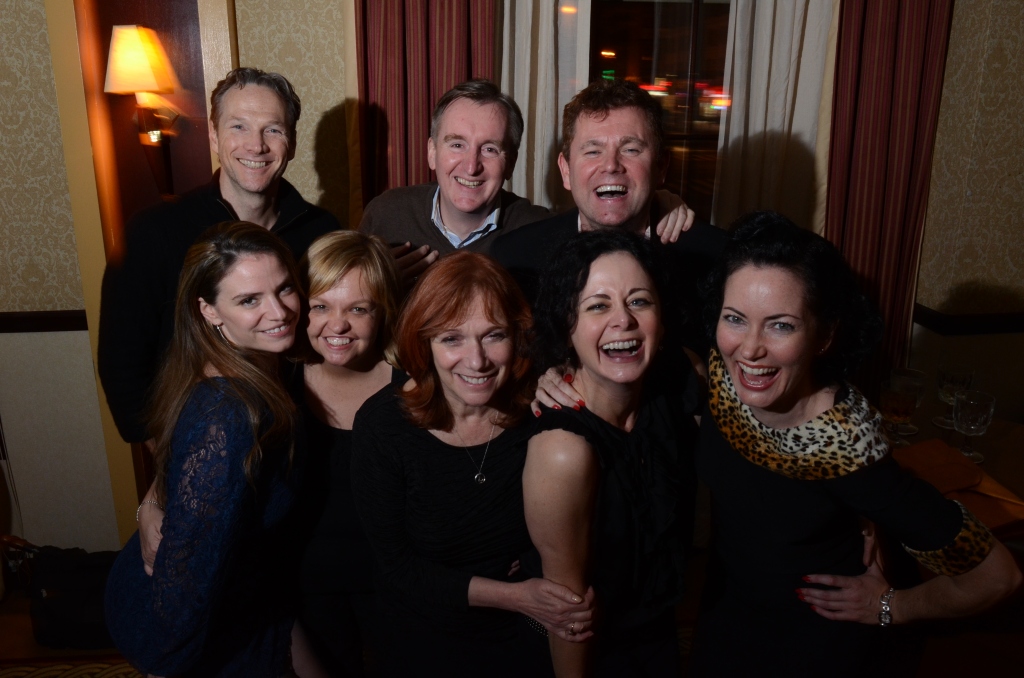