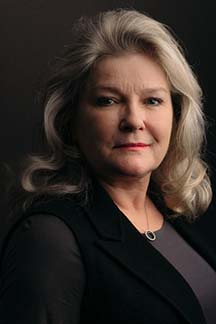 Irish American Writers & Artists presented Kate Mulgrew with our 2020 Eugene O’Neill Award for Lifetime Achievement in the Arts in a virtual ceremony and party in December 2020.

An actress who had the lead role in the television series Ryan’s Hope early in her career, Kate has captivated fans in film, theater, and television, most notably as the first female Star Trek captain, Admiral Kathryn Janeway, and as Galina “Red” Reznikov in the Netflix hit Orange Is The New Black, for which she received an Emmy nomination, a Critics’ Choice Television Award, and a Screen Actors Guild Award for Outstanding Performance By An Ensemble. Kate has also published two memoirs, Born With Teeth and How To Forget: A Daughter’s Memoir.

The Virtual O’Neill featured tributes from Kate’s friends and family, from Hollywood to Galway. NY/Sligo fiddler Tony DeMarco and Times Square troubadour Derek Dempsey gave musical performances. Her devoted fans from the world over joined in the fun.

On receiving the Award, handcrafted and etched in optic glass by Tiffany, Kate remarked:

“I am delighted, humbled and deeply honored to be awarded the Eugene O’Neill Lifetime Award.  Having come late to writing, I find a certain inexplicable gratification in the process itself, not to mention the entirely unexpected recognition I have received for my memoirs.  It strikes me as a brave new world, a path not indicated for the faint of heart, but if well-chosen, a path surpassing any other.  Although I’m not entirely sure I deserve this award, I am nonetheless very grateful to the committee for having chosen me.  It was exactly the spur I needed as I begin a new novel, tentatively entitled “The Irish House.”

Please consider making a donation to our Frank McCourt Award, named in memory of the best-selling author of Angela’s Ashes, and a former NYC teacher, to encourage student writers in NYC schools. Irish American Writers & Artists, Inc. is a qualified 501(c)(3) tax-exempt organization and donations are tax-deductible to the full extent of the law. No goods or services were provided for this gift. Please consult your tax advisor regarding specific questions about your deductions.