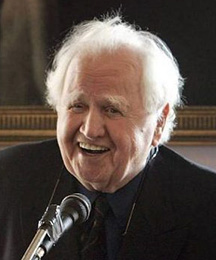 Born in Brooklyn, New York and raised in Limerick, Ireland from the age of three, Malachy McCourt returned to the land of his birth at age twenty and began his long-running career.

He has appeared on and off Broadway in Mass Appeal, Da, The Hostage, Inherit the Wind, and A Couple of Blaguards, which he co-authored and starred in with his brother Frank. His TV credits include appearances on many soap operas and as a guest on The Tonight Show, Conan O’Brien and The Late, Late Show. His movie career has also been varied, with roles in The Molly Maguires, She’s The One, Devil’s Own, Green Card, and many others.

As a writer, he has published a New York Times best selling memoir, A Monk Swimming, as well as a history of the song Danny Boy, a history of the Claddagh ring, and Malachy McCourt’s History of Ireland. Malachy also co-hosts the radio show “Talk Back” on WBAI 99.5 FM.

“Malachy has been a powerful force in the arts of Irish New York for decades,” says IAW&A President Larry Kirwan. “With his acting and writing talent, his generosity of spirit, and his love of life and creativity, he is known as our organization’s ‘spiritual godfather.’ Malachy came up with the idea of the IAW&A Salon and he reads and sings there every month, delighting audiences and encouraging emerging artists.”