An exceptional night at the salon! We had supremely talented first-time presenters and passionate work from familiar faces at the Bar Thalia on Tuesday, May 7, 2013.

Salon producer and the evening’s host, John Kearns, read an excerpt from his novel in progress, Worlds.  In this segment, Stephanie, the barmaid, and the two men who are interested in her, Englishman Gavin and Irish-American Paul Logan, are on their way from lower Manhattan to Hell’s Kitchen. Finding that a small dumpling shop in Chinatown is open late, they make an impromptu gluttonous stop and gorge themselves on dumplings and pork buns in a car parked on Mulberry Bend. Delivered with gusto!  John promises that this car trip to Hell’s Kitchen will cover all the Deadly Sins.  See more of his work at http://kearnscafe.com/

Kathleen Vaughan read a chapter from her forthcoming book. The chapter title was “Father Teaches Daughter How To Be a Daughter & Daughter Teaches Father How To Be a Father.” The special love between Kathleen and her father was palpable in her reading.  Salon members called it  “… inspiring, touching and yet so gentle…” and look forward to more of Kathleen’s story.

First-time reader, Memphis-based Aisling Cordon Maki presented two stories.  The first one was about her West Donegal grandmother’s affinity for birds, particularly the cuckoo bird, “a lazy, lecherous species whose male is, of course, useless — flying the coop immediately after getting his rocks off.”

Despite his “nasty reproductive behavior,” Aisling’s granny, Hannah MacGrianna, celebrated the cuckoo as the harbinger of summer Ireland. “Its cuckoo, cuckoo was the song of her youth — of dancing at the crossroads and singing around the bonfires on Oiche Eoin; of Northern sunlight tickling wildflowers and freckled faces; and of seals and salty bottomed boats bobbing in the cool waves of a fresh Atlantic dawn.” 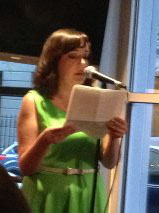 Aisling’s second piece was a humorous take on being Irish Catholic in the South, from trying to acclimate a Southern Baptist husband to the Catholic mass (“Ya’ll drink wine and burn incense at church?”) to needing a fake WASP name to use for to-go orders. “Here in the Northeastern US, we take for granted the fact that we who were raised in immigrant households have others who share our story. But such camaraderie is a rare, rare find below the Mason-Dixon line, where it’s nearly impossible to find Aoifes, Siobhans Oisins and Malachys.”

Aisling found that camaraderie tonight. She is working on a memoir and a novel and is seeking representation. www.aislingmaki.com.

Ray Lindie, actor, playwright, and writer, read a story called “The Beefeater Martini.” When Ray was bartending at the fabled literary hangout Elaine’s, he carefully mixed a drink for a charming southern gentleman. Unbeknownst to the bartender/actor, he was making this Beefeater Martini for his idol, Tennessee Williams. As Ray described every step, listeners could see the process,  and for those so inclined, thirst for a martini.

Guenevere Donohue, actor, director, playwright, captivated the group by becoming Violet Gibson, a now forgotten historical figure who became known throughout the world in 1926 when she shot Italian dictator, Benito Mussolini. The failed assassination attempt landed Violet in an asylum in Llanfairfechan, Wales, where Guen’s grandmother became her night-nurse. That story from Granny landed the would-be assassin in Guenevere’s play, The Poecock.

The fabulous Butler Boys… Mark William Butler presented his ten-minute one-act play, “Sleeping with Movie Stars,” which is about a rather unusual session between a frustrated man and his therapist. Mark and his brother Richard Butler were terrifically funny reading this piece. Mark may expand the play into a longer piece, and include as many movie stars as he can dream up. 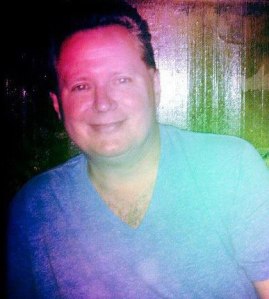 Then Richard P. Butler, actor, singer, director, sang beautiful renditions of two songs: “I Miss the Mountains” from the musical, Next To Normal (music by Tom Kitt and lyrics by Brian Yorkey), and “Gimme Gimme” from Thoroughly Modern Millie (music by Jeanine Tesori and lyrics by Dick Scanlan).

“An honest, heartbreaking remembrance of an addict and mother. In simple, unadorned prose, each chapter comprises a series of loosely themed recollections. Many highlight his mother’s popularity among friends and her universally recognized charisma. The darker material is gripping, if horrifying, and readers are sure to root for the narrator’s charming child-self. Deftly conjured, this portrait of the author’s imperfect mother is neither indictment nor defense; a fine addition to the memoir genre.”

Tom Mahon read a piece of non-fiction called, “The Woman Who Made My Mother Laugh.”  Tom, a young boy in Bayonne, New Jersey, comes home to find his mother laughing like he had never heard her laugh before. The cause was a milk delivery woman, a concentration-camp survivor who took over her husband’s milk route when he died in the mid-50s. Mrs. Kauffman and Mrs. Mahon were able to break through their isolated loneliness through laughter until Mrs. Kauffman died.  A tender story from a salon regular.

Karen Harter who hails from Co. Wexford read from the opening pages of her work in progress, a fantasy novel titled Slanu. On her deathbed, a sixteen-year-old girl is visited by two strangers filled with promises of a world unmarred by affliction. A perfect world known as SLANU. What they fail to mention, is that to reach SLANU she must first cross a land at war with itself. And that the future of this land and its inhabitants lies in her hands.

Tonight was Karen’s first time presenting at the Salon, which she found “both motivating and inspiring” and many Salon goers returned the compliment.  Follow Karen on both Facebook and twitter @karenharter 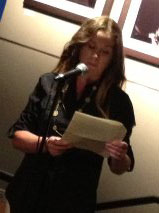 Jim Rodgers read another chapter of his novel, Long Night’s End. The protagonist Johnny Gunn, still reeling from the death of his son and the suicide of his best friend, with his mistress pregnant with his child, goes on a bender after playing a gig on the Lower East Side. Leaving the club  Johnny wanders out into the night, gets robbed and beaten by drug dealers, passes out against a store front, and is awakened the next morning by an Orthodox Jewish milliner trying to open up his store. We await to see if Johnny will pull out of his moral and spiritual nosedive. 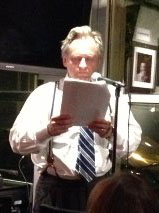 John Paul Skocik returned to the Salon to perform a few more songs from his repertoire: first was “Keys On the Counter,” about the end of a relationship and the realization of time lost; next was “Rehab,” based on true events about a person who desires self-destruction, despite knowing better and regardless of consequence; and finally “You’re No Good,” which is basically self-explanatory. His band Girl To Gorilla is currently recording their second album, and they’ll be appearing live at The Grand Victory in Williamsburg, Brooklyn this Memorial Day, May 27. Tickets are available at www.ticketweb.com/fb/3545554/scenic. For more information on Girl To Gorilla, visit http://www.myspace.com/girltogorilla. John would also like to thank his lovely wife, Jessica, and their newborn son, Jack, for their love and support, though Jess is a little more aware of it than Jack at the moment. 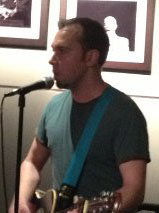 Malachy McCourt read his contribution to a book called The Face in the Mirror.  It summed up his life from his childhood in Limerick “that city of death…and despair” and limited prospects to his full life as an actor, author raconteur, family man in America, aided by the “miracle of the Carnegie Library’s” arriving in Limerick. Honest, moving, raw, funny, uplifting… pure Malachy.

And he sang us out with “Whiskey, You’re the Devil”!

Malachy With a Hell of an Ending