New Member with a New Novel

The Barn is the second novel from Postmortem-press by Jason Downes and is slated for release early October.

The year is 1789 and the town of Aldwood have decided to build something that will serve the community. A place in which to gather in the fine weather and to store emergency supplies in the winter. A local farmer donates one of his fields and soon the work begins on this noble and worthy project. 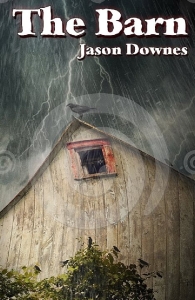 However unbeknownst to the towns folk burried beneath the earth for hundreds of years, imprisoned there by the ancient native tribe in the area is a demon of unspeakable evil. It remains within its prison held there through an ancient rite and an oath never to build upon the land. Once the foundation for the barn is started, the oath is broken and the one last item which binds the thing to the field is taken and with it is unleashed a monster which at first is weak but over time grows in strength and power and aims to seek revenge on the ancient tribe and use the citizens of Aldwood to feed its hunger.

Spanning the centuries from the 1780’s to the 1970’s the barn follows the demon with the building as it uses the weak, the stressed and the evil minds of Aldwood as it regains its strength and seeks a host to finally wreek a terrible revenge on the Native tribe that imprisoned it centuries before.

Several tales link into one common enemy and with each one the terror and horror exceeds until the climax is reached between the old evil, several strong and tired spirits and the tribe.

Advance praise for The Barn

This novel is a chilling history of horror, with several hideous tales that unravel to reveal one common foe. Each new period of that history is more gruesome than the last, and as those stories come together you find yourself crawling to the edge of your seat.

Kenneth W. Cain, author of The Saga of I and The Dead Civil War

THE BARN is a ghost story unlike any other. Downes’ richly written, identifiable characters are haunted not only by the malevolent spirits of an eerie barn in New Jersey, but also by a uniquely American guilt spanning several generations. Fast-paced, at times heart-wrenching, and packed with plenty of chills, THE BARN, like its inhabitants, will stay with you long after the pages have run out.

Joseph Williams, author of Detroit Macabre and Swinging from Stars

Less than a third of the way through “The Barn,” I was enthralled as well as surprised by the ease at which Jason Downes’ characters touched my heart and chilled me to the bone. As much as I hated putting the book down, I had to stop on several occasions so I could get some nightmare-free sleep.

Jessica McHugh, author of Rabbits on the Garden, The Sky, the World, and PINS.