No Summer Slowdown at #iawasalon: 8/6/14 IAW&A Salon at Bar Thalia

No summer doldrums for the diverse and talented artists at the lively IAW&A Salon at Bar Thalia on August 6. In fact, the night had a number of firsts. First hosting gig by the gracious Maria Deasy; the “world premier” of songs from two musicians, John Skocik and Andrew Koss; first comedy performance by musician/writer Jon Gordon; (perhaps) the first Israeli-born presenter; a seven-person ensemble for Maura Knowles’ piece, surely a first for the Bar Thalia space and the introduction of our Salon hashtag. 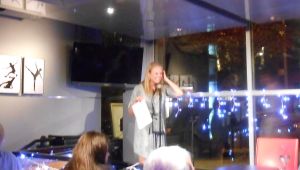 The evening’s host Maria Deasy is an actress, singer, and writer who has starred Off-Broadway and in film. She plays Jackie Moss in Hooroo Jackson’s new movie Aimy In A Cage starring Paz de la Huerta and Crispin Glover, due out this fall. Look for her as “Gwen Sherbondy” in Momsters – When Moms Go Bad hosted by Roseanne Barr. Yes, she is the Momster. Visit www.mariadeasy.com. 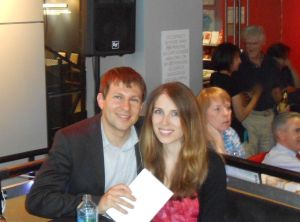 Sean Carlson, his fiancee, Cathlin Olszewski, and his manuscript

Sean Carlson kicked off our evening with another glimpse into the manuscript of his first book, yet untitled — a captivating narrative of a family’s immigration from Ireland to London and the Bronx. This latest reading brought us back in time to Co. Kerry when dances were held outdoors at a local crossroads, leading to “a love marriage in an era of matchmaking.” Sean will continue sharing his work at our salons over the coming months. Learn more and join his email list for updates here: www.seancarlson.net. 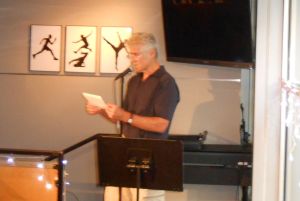 Tom Mahon read a dramatic short story from his collection of vignettes Tomorrow Never Came. It’s about how people live and die, often unexpectedly. Tom’s selection tonight was “Friendly Fire.” On a lieutenant’s last night in-country before going home after a year in the infantry, he gives a cigarette to a friendly local soldier. The soldier resents the American going home, leaving him and his friends to fight a war America started. They have both lost people and seen so many wounded and dead. The soldier lifts his weapon on the defenseless lieutenant who’s drunk far more than he should have, and shoots and kills him on his last night. 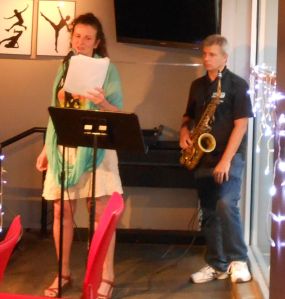 In a stunning collaboration, Guenevere Donohue shared an original song from her theatre piece about her father, Killer Is My Name. The song, “Revered,” was rich, sweet, and had a profound effect on the audience. Guen was thrilled to be accompanied by the fantastic jazz sax man, Jon Gordon. 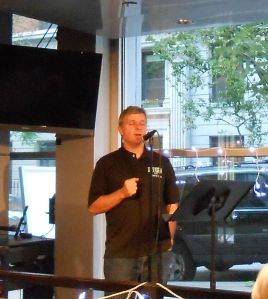 Next Jon Gordon decided to change up the mood with two brilliant and funny pieces by IAW&A Hall of Famer George Carlin, “Advertising”, as well as his rewording of “America the Beautiful”. The late comedian was a native of the Upper West Side, so Jon – and the salongoers – enjoyed hearing his work at the Thalia. Jon’s a memoirist, world-class musician, and as we’ve now seen, a good comedian. 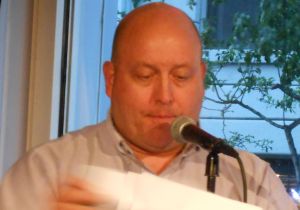 John Kearns read a brand-new excerpt from his novel in progress, Worlds, featuring two of the main characters in his four-generation family portrait. When Janey Logan finds that the A&P has sent her son, Paul, home on his bicycle on a rainy day with a jar of mayonnaise in only a single brown paper bag, she takes Paul back to the store and makes a scene to humiliate the manager into giving her a new jar — in a double bag. “And she didn’t even like mayonnaise.” John has been working his way through the seven deadly sins and though tonight’s excerpt was about “Anger,” he had the audience laughing in recognition. 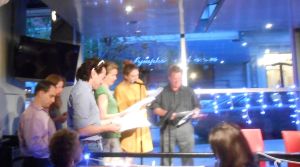 Actor/singer/writer Maura (Mo) Knowles presented a section of an autobiographical new play with music, Insult to Injury that she is creating with composer Nathania Wibowo. In addition to Maura as Mo, the cast featured Luis Villabon, Joe Scalzo, Kathy Callahan, Mark Butler, Marni Rice and Julie Currie reading stage directions. Maura, who lives in NY and LA, has been shooting a new web series, Common Ground and was recently cast in the feature film, I Love Hate currently in development in NY. www.mauramknowles.com She thanks IAW&A for including her in a thrilling line-up.

“T’was an honor to share the stage with everyone last night.” 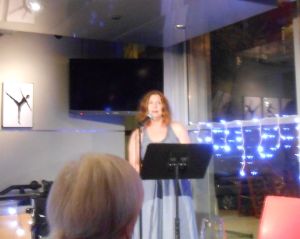 After the break, Lissa Kiernan made good on her promise to read her early, funny poems, though she snuck in a few sucker punches. After all, as her friend and mentor, Jeanne Marie Beaumont, in attendance, pointed out: “it wouldn’t be a true Irish event without a bit of woe and darkness in amongst the light!” Lissa was also joined by friends from her workplace, World Monuments Fund, poet Alexandra van de Kamp, a fellow teaching artist from The Rooster Moans Poetry Cooperative, and a lovely couple—the writer Gail Hovey and artist Pat Hickman—who hoofed it in all the way from Haverstraw! Find out more about Lissa’s new release, Two Faint Lines in the Violet, at twofaintlines.com, and come out to support her at KGB Bar on September 16, 7 PM, in a fundraiser for the wonderful New York Writer’s Coalition. 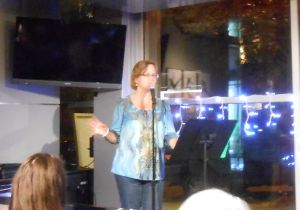 Marcia Loughran read a rant about Brooklyn and three poems with summer/road trip themes.  She was excited to be back at the Salon and impressed with the terrific crowd. 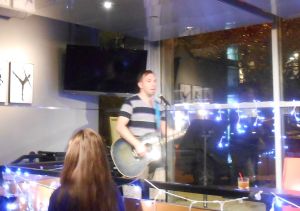 John Skocik, lead singer and songwriter from Girl to Gorilla, got us singin’ and rockin’ to his songs, including the “world premier” of his brand-new “Crying in the Rain;” “I Really Want to Break Your Heart” and “Jenny Doesn’t Live with Me Anymore.” John’s performances always enliven the night. 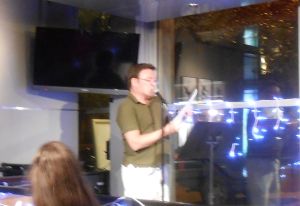 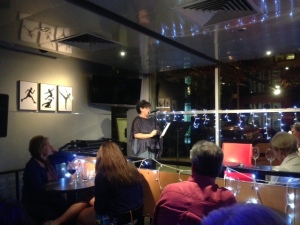 Yona Gonik has been attending IAW&A Salons when her schedule allows and tonight we were happy to welcome her as a first-time presenter. Yona read a section of her memoir-in-progress focusing on different “domestic jobs for fancy New Yorkers” she had upon arriving from Israel. Her work is a “satire shooting in all directions [denominations, classes] not sparing even blue collar workers, and hopefully leading to grace and compassion.” Yona adds that the Salon is “one of the only things in NY that interests me wholeheartedly…” 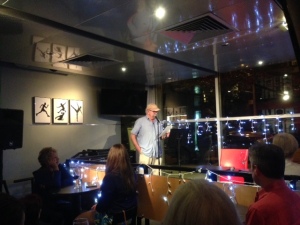 Christy Jones, returned tonight with another piece of his memoir, Taxi to Broadway (tentative title). Christy appreciates our encouraging reception to his work-in-progress. And we’d like to hear more of his journey from rural Ireland to pursue his love for theater and American musicals in NY and included time in the US National Guard; the Stella Adler Theatre Studio; Off Broadway, Regional Theatre and finally Broadway in the Brian Friel play Philadelphia, Here I Come! 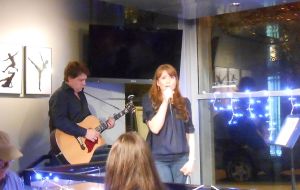 The wonderful duo of singer Maxine Linehan and guitarist Andrew Koss ended the night on an upbeat note, with the song “The Only Home I Know” from Shenandoah A Musical by James Lee Barrett, Peter Udell, and Philip Rose. Then Maxine and Andrew debuted Andrew’s original new song “I Think of You,” which, says Sean Carlson, “‪… couldn’t put better words around living in New York…” Learn about her upcoming performances and new album at www.maxinelinehan.com 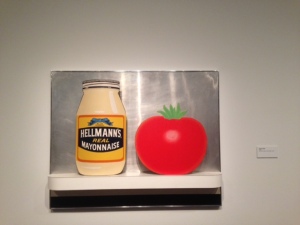 Next #iawasalon will be on Tuesday, August 19 at The Cell.  See you there!