Prose, Poetry, and Song Old and New at the 9/3 IAW&A Salon at Bar Thalia

Instead of or in addition to reading their own work, several presenters read prose from and about others giving a distinct feel to the IAW&A Salon at Bar Thalia on Wednesday, September 3rd. 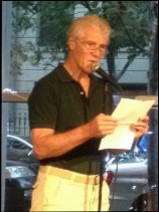 Kicking off what became a theme of the night, Tom Mahon inspired the crowd by reading from Nelson Mandela’s acceptance speech for the presidency of South Africa. He followed that up with his own “Fierce Pride & a Generous Heart” from Delusions, his collection of vignettes. His story told of a young person who vows to care for an elder under very trying conditions, but keeps his or her word because the priest told the young person that he or she will go to heaven for caring for the least of us.  Mahon jokes “never read anything you read after reading from Nelson Mandela.”

Next up, board member Karen Daly showed why she is a longtime fan of Pete Hamill, who will receive our Eugene O’Neill Lifetime Achievement Award on October 20. Reading from Hamill’s, “A Melancholy Fall in the Gardens of Brooklyn”(a 1968 Village Voice column), Daly gave a lovely rendition of a beautiful, evocative, perfect piece of writing.

Sean Carlson offered his own twist on the night’s theme by reading a section of his yet untitled family memoir about his mother, Nuala, a County Kerry native, who accompanied him to the IAW&A Salon. Carlson brought to life the beginnings of change in Ireland during the middle of the 20th century. Captivating the crowd, Carlson shared the tension and wonder surrounding his mother’s birth as the fifteenth of sixteen children and the first born outside the home. To learn more or join his email list, please visit www.seancarlson.net

Our hard-working host, John Kearns, took a cue from the beginning of the school year, presenting a brand-new excerpt from his multi-generational novel, Worlds.  In the excerpt, Paul Logan, in his first weeks as a teacher in the South Bronx, is attacked by his student Shinone Williams. After Shinone gets a detention, she throws her books at her teacher and grabs him by his throat. Logan manages to get Williams out of the classroom and finds out she will be expelled. Returning to his room, he finds two students fighting over whether it was funny when Logan ducked out of the way of Shinone’s flying books. 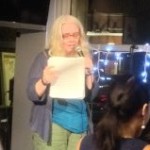 Mary Lannon read from the middle of a longish short story, “A Key to Castastrophe Management,” in which a college senior obsesses about the weather, tries to figure out her future, and shows her unfamiliarity with love. Check out Lannon’s web site for her novel: http//www.MirandaJMcCleod.com.

The first half ended with the multi-talented Maura Mulligan’s singing a sean nós (old style) song she learned from Donegal singer/composer Dominic Mac Goille Bhríde in July at the South Sligo Summer School. The song, “Tráthnóna Beag Aréir” is a love song in the Irish language (Gaeilge). Mulligan explained that the poet is wishing to experience again the beauty of the previous evening when there was silence in the sky and the lovers drifted together through the bog cotton. This traditional style of singing is generally melodically and rhythmically complex.  Subtleties vary by region, and it is highly individualistic.

Jack DiMonte led off the second half singing a beautiful rendition of “Summer Wind,” a song about how romance is as fickle as the fleeing summer.  “Summer Wind” began life as a German pop song by Heinz Meier to which American Johnny Mercer later set the now-famous English lyrics that Frank Sinatra immortalized in a 1966 recording.

A new presenter John Brennan picked up on the theme of the night, beginning by reading Seamus Heaney’s “Digging.” Next, Brennan read “The Green Valley,” a poem he wrote about the ancient Boyne valley (Bru na Boine) and “The Singing Bones” from his book Don’t Die with Regrets, which he wrote for his father Mal. Brennan ended with “The Night Moths,” his tribute poem to W.B .Yeats and a short story, “The Dealing Man.”

Malachy McCourt finished off the night reading from the Foreword he wrote for Come Here Often? 53 Writers Raise a Glass to Their Favorite Bar, edited by Sean Manning.  He also led the group in singing a Brendan Behan song.

See you at the Cell on September 16th!!