Rousing Start to the “Irish Season”: The IAW&A Salon on March 4th

What might be affectionately known as “The Irish Season” got off to a rousing start for the IAW&A on Tuesday, March 4, as the organization held the first of its two monthly Salons at Bar Thalia.  Even as the bone-chilling winter winds continued to whip up trouble outside, they were no match for the warm creative spirit that dominated the evening’s festivities, which included a world-class Irish tenor, the next generation of a renowned storytelling family, and an eastern expansion of the Irish border – to China!  And away we go! 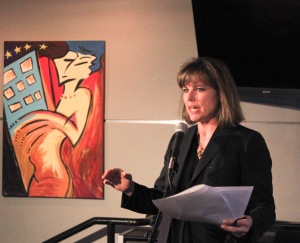 Serving as the host was the always charming and witty writer/comedian Sarah Fearon, and she set the tone early by sharing the first of a collection of literary St. Patrick’s Day cards that had been sent to her over the years by her father, IAWA counsel Stephen J. Fearon.  The leadoff writer for this impressive lineup was Seamus Heaney, who would then be followed throughout the course of the night by J.M. Synge, Patrick Kavanagh, and IAWA Eugene O’Neill award recipient William Kennedy. 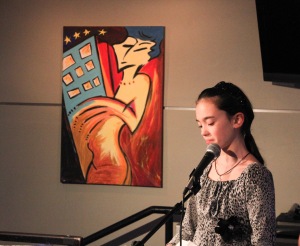 Next, the audience was treated to some delightful poetry by ten-year-old Gillian McCourt (you may have heard of her granddad), who seems poised to continue the outstanding literary tradition of her celebrated family.  Gillian’s poems included “The Blank Page”, an insightful observation of the act of writing itself, and “The Ear Infection”, a very funny imagining of a visit to a doctor’s office.  Gillian confided that she was happy to be able to share her work with new friends, and was thankful to see that they seemed to enjoy it.  Enjoy it they did, and those friends join The Salon in wishing Gillian a very happy birthday later this month.

Here is a video of Gillian’s performance, shot by her father, Conor McCourt: http://youtu.be/_L1CuiswVBY 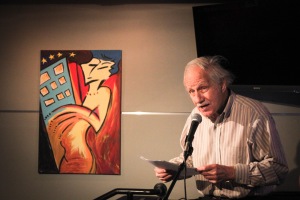 The crowd then welcomed newcomer Ed Grimm as he shared some of his poetry, which included subject matter as varied as cats, New York City, and war.  It was an intriguing and entertaining mix.

The following presenter, Ira Goldstein, explained that when Sarah Fearon invited him to read for the Irish Salon his first reaction was, “But I’m not Irish!”  “It’s all right”, replied the ever-resourceful Sarah, “I’ll introduce you as Ira O’Goldstein!”  This led to the newly-minted honorary Irishman exploring all of his Hibernian connections, which inspired the first poem he shared.  Mr. O’Goldstein also read a humorous tribute to his home borough of Staten Island. 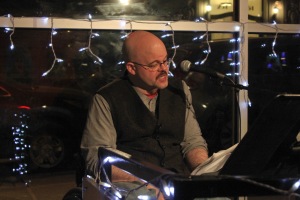 Writer Brendan Costello then guided us through a fascinating multi-media tour of his trip to New Orleans during the first Mardi Gras after Hurricane Katrina.  Brendan’s sharp, compassionate observations on the state of the city after the disaster were brought to visual life by his collection of candid, colorful photographs. 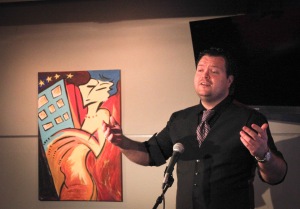 The last presentation before the break was a special one indeed, as Irish tenor Karl Scully, fresh off his bravura performance at the St. Pat’s Day Parade for All Benefit at The Irish Arts Center the previous Friday, repeated it for the lucky crowd on this night as he sang three songs, including the hilarious “McBreen’s Heifer,” “Knocknashee,” and the timeless “Danny Boy”. 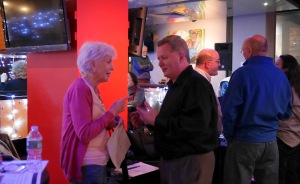 Karl’s soaring performance had the room buzzing during the break, as the enthusiastic audience commandeered the bar and did a little table hopping; mixing and mingling with their comrades and colleagues. 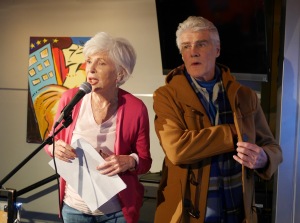 Playwright Sheila Walsh launched the second half of the evening as she was joined onstage by writer/actor Tom Mahon to read from Ms. Walsh’s play O The Days! — a  raucous and poignant coming of age story about a whip-smart teenager who longs to find her father but finds herself instead. 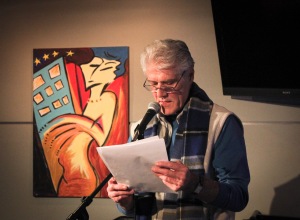 Tom Mahon himself then read a chapter from his novel American Mastery, where Charlie and Ray Fenton are in Tokyo with twelve hours to kill, and nearly get killed themselves.  They are waiting for the early morning flight home to attend to their father, whose heart attack has ruined their celebration of a business triumph – their partnership with a company to make and sell Kelly’s products all over Asia.  With the pall of death now hanging over them, they decide to go to Ginza, the nightclub section of Tokyo, and when leaving are surrounded by four thugs demanding their money.  Before Charlie even realizes the reality of the situation, Raymond has already kicked the knife from one thug’s hand and his other foot has kicked him to the ground where he smashes his head.  Charlie fouls himself, hardly believing his brother has killed a man in front of his eyes. “Better he than us,” Raymond says, then teaches Charlie how to defend himself if attacked. 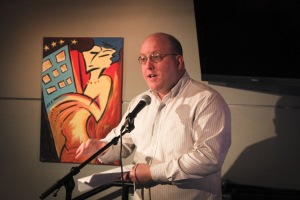 Novelist and Salon producer John Kearns then joined the proceedings by reading an excerpt from his novel-in-progress, Worlds.  In this excerpt, Janey and James Logan have taken their children to Center City Philadelphia in the early 1970s to see the Light Show at Wanamaker’s Department Store and the Enchanted Colonial Village at Lit Brothers’ Department Store.  After Paul gets lost in a reverie about the colonial blacksmith from the Enchanted Village coming to life and walking through modern Philadelphia, he realizes that his little sister with whom he had been fighting most of the evening was not enjoying herself and expresses kindness toward her. 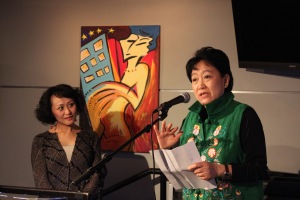 The Salon then welcomed two first-time presenters, who once again demonstrated that the Irish spirit knows no boundaries.  Sue Wan Sun, expressing her gratitude for an Irish-American family who helped her when she first came to the US from China, read James Joyce’s “Ecce Puer” (“Behold the Boy”) about the near-simultaneous birth of his grandson and death of his father.  She followed that with the anonymous 13th century poem, “Ancient Irish Hospitality.”  Daisy Kearns then took the stage, proclaiming “I’m Chinese and I’m Irish and I’m proud,” before performing a dynamic rendition of Yeats’s “Brown Penny.” 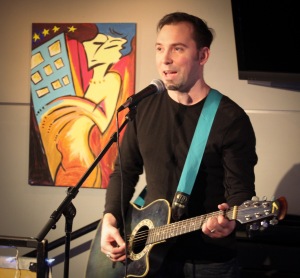 Singer/actor John Skocik then rocked the house with several of his original songs, including the riotous show-stopper, “Don’t Fall in Love With a Woman Who Don’t Give a Damn About You”. 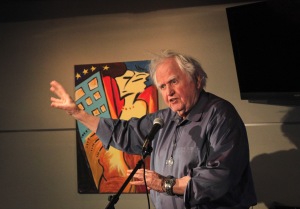 The night was then wrapped up in style by Gillian’s grandpa, and the dadai of The Salon, Malachy McCourt, who shared his hilarious observations on two beloved and iconic Irish symbols, St. Patrick and “Danny Boy”, pointing out with no small amount of irony that St. Patrick was a Roman Saxon and the composer of “Danny Boy” never even set foot in Ireland.  He also shared his belief that poems should be “dancing and singing in the mind”, and then proceeded to dance and sing his way through Yeats’s “Host in the Air” before he brought the house down with the classic tune, “Fine Girl You Are.”

And finally, one for the road, from the man himself… “Imagination in the child is powerful.  Reading and laughter and love are essential in our lives.” – MALACHY McCOURT