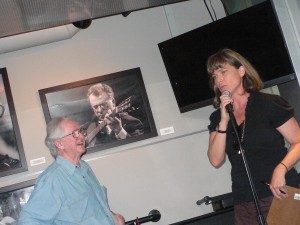 by Charles Hale
Okay. So Mary Black didn’t close out Tuesday night’s second Irish American Writers & Artists’ Salon. But we did have singer/songwriter/guitarist Michael Sheahan sing a beautiful ballad, “Pressed Between the Pages of Time” from his soon be released CD.

The Salon, the brainchild, of Malachy McCourt,  allows IAW&A members the opportunity to present in the medium of their choice: a reading from a work in progress, a video, a comedy skit, storytelling or a song, whatever the participant would like to present. The event is meant to be low-keyed and that’s exactly what it was, a group of artists gathered to support one another in a relaxed and convivial atmosphere.

Sarah Fearon emceed the gathering, and along with Dennis Driscoll, brought a fair dose of hilarity to the proceedings, Sarah with her video “Snazzy Sells the Highline,” and Dennis with a riotous tale of growing up in NYC  called “The Shit Line.”

Honor Molly gave a spirited reading from her soon to be released novel, Smarty Girl; Martha Pinson shared a poignant tribute to her “Grandma Deeny;” Mary Gannon read a stirring poem, “Chemotherapy I,” and Mary Lou Quinlan shared a wonderful work in progress, a one woman show, “The God Box.”

In addition, John Kearns, Mary Pat Kelly, Pat Hanrahan, Neil Hickey read from their novels in progress, Sheila Walsh read from a play in progress, and I read a short story.

The turnout was excellent, particularly in light of the fact that it was a holiday week.  Members and their friends enjoyed a number of fine performances from the IAW&A’s members in a perfect setting, The Thalia Cafe, located at Symphony Space on Broadway and 95th Street.  When the performances ended, few were quick to leave.  The atmosphere was conducive to sipping cocktails, becoming acquainted, and sharing stories.

The salons are held on the first Tuesday of each month at The Thalia Cafe. For more information on joining the IAW&A or attending the Salons you can contact Charles Hale at chashale1@yahoo.com orkmfrazier@mindspring.com   The next Salon will be held August 2nd.