The joint was jumpin’ with a packed house at Bar Thalia on Tuesday for yet another wild and wonderful IAW&A Salon. Standing room only! Singing room only! Reading and writing and acting and jamming room only! And away we go…

John Kearns read an excerpt from his novel in progress, Worlds, in which Paul Logan remembers in terms of an epic battle a schoolyard “Keep Away” game between his sixth-grade friends and the eighth graders who had stolen their pee wee football. Just as in the Iliad Homer wrote of the exploits of  Ajax and Hector fighting their enemies on the plains of Troy, so Paul Logan’s proud memory narrates the tale of his Sacred Heart schoolyard exploits with epic similes and heroic epithets.

Peadar Ó hÍcí then made his Salon debut with two great songs. The first was “The Ballad of Luke Ryan,” which deals with the exploits of an Irish pirate turned privateer. Luke Ryan was one of Benjamin Franklin’s Pirate Navy during the Revolutionary War. He captured more British Navy ships than any other captain acting on behalf of the United States. “Take the butcher’s apron (Union Jack) down and hoist the Stars and Stripes” is a reference to the practice of flying under false friendly flags to lure an enemy ship close. His second number, “The Faraway Hill Looks So Blue,” is about being a Dubliner away from home and missing out on the celebrations on Dublin’s Hill 16 during the All-Ireland Football Final. 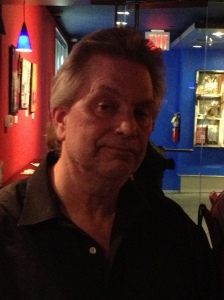 Crime fiction writer Gary Cahill returned to read two pieces from an even darker side of the street than usual. Hudson County, November ’80 is a flash fiction piece, short enough to read in under five minutes, and is published on the free Shotgun Honey website (www.shotgunhoney.net). A guy finds a loaded money clip, and waits in a local bar to see if he’ll keep it, or lose everything; guess which way that goes. The murder of JFK and its legacy is the subject of “Fathers, Sons, Ghosts, Guns,” published in the Big Pulp Magazineanthology The Kennedy Curse. Lesson learned? Blood may be thicker than water, but it’s not thicker than oil. Gary will be appearing at the 2A Bar on Avenue A and E. 2nd. St. on Monday October 7th, 8 pm, reading at an event for this very pulp fiction short story collection. So, come on down to the East Village! 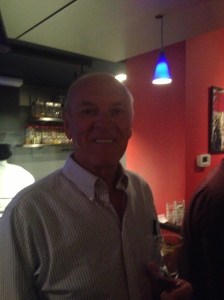 Kevin R. McPartland then treated us to a mesmerizing chapter from his recently released novel, Brownstone Dreams, in which he describes his protagonist in dire straights, held up in a flea-bag hotel on the Lower East Side with a pair of Brooklyn hit men and police closing in fast. Kevin also announced his book launch party at the Cell Theatre on 10/13/13 from 3-5pm. He invited all present to stop by have a drink and purchase the novel if they feel so inclined.

Author Ray Lindie then pushed the envelope with the latest excerpt from his ongoing crime fiction project, Lone Hero, a tale told in a no-holds-barred, gritty and grimy pulp genre style.

The fearless Sarah Fearon then tried something new and read from the first draft of a short story entitled, “Francis, Waiting for the A.” The action revolves around old school friends from Rockaway and midtown Manhattan, global warming storms and an inventive real estate heist. Sarah’s work reminded us that the right combination of sad, funny, and suspense always makes for a good story.

Marcia Loughran then closed out the first half of the show by reading poems about fishing, marriage, and the Rockaways… and about October feeling like the end of the world… but in a good way. She charmed the crowd with her warmth and humor.

It was then time for the break, as Bar Thalia transformed into the much more pronounceable Bar, and our intrepid artists exchanged ideas while they consumed a wide variety of refreshing beverages. 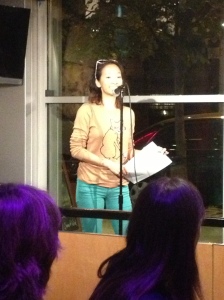 Actress Adelyne Liu kicked off the second half of the proceedings by reading a series of poems that expressed her frustrations and inspirations since her journey from Los Angeles back to her native New York. Her first one, “Blissfully Free,” was set in the sometimes grimy and dark streets of New York City with undertones of political dissatisfaction. “Raindrops on a Summer’s Day” was about the beauty of rain, but also a reminder to cherish every day. Lastly, “Climbing on Monkey Bars” was an ode to her grandfather and an expression of nostalgia of being young girl.

Kathy Callahan told a story called, “A Good Sign, Indeed.” In the story, Ms. Callahan derives timeless inspiration and encouragement during a conversation with the ever generous Seamus Heaney, on being a fearless writer and storyteller. And while crossing paths with Malachy McCourt when she least expected it. A good sign, indeed.

Sheila Agnew followed with a very funny article about the various types of rejections writers receive… it was a piece nearly everyone in the crowd could identify with… unfortunately.

Maureen Hossbacher then read an excerpt from her story, “The Enemies of Rose,” which is included in the New Rivers Press anthology The Next Parish Over: A Collection of Irish American Writing. The story brings the narrator, Deirdre, to Rockaway Beach to attend the funeral of her godmother, Rose, who has been absent from Deirdre’s life for many years. But Rose – a woman to whom attention must be paid – makes her presence known, as she orchestrates, from the grave, an amusing confrontation between her former employer and her godchild. Thus Rose insures that she will long be remembered. 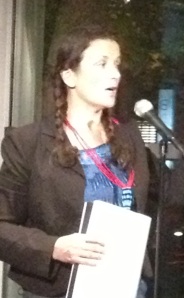 Next up was Guen Donohue, who performed a stirring monologue from her play, The Poecock, and wowed the crowd with the song, “The Rocky Road to Dublin.”

Jack DiMonte then brought his usual musical panache to “But For Now,” a ballad by Bob Dorough that depicts the rose-colored view of one newly-smitten, before really getting to know the object of their affection. Instead the song declares “But for now let me say I love you, later on I must know much more of you.” 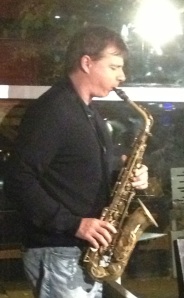 The evening then came to a spectacular close with saxophonist Jon Gordon’s incredible, improvisational jazz rendition of “Danny Boy” (or “The Derry Air”). It was an inspiring and soulful conclusion to yet another sensational Salon celebration. (Alliteration sold separately.)

And finally, one for the road… “Action is the antidote to despair.” – Joan Baez