On a night when many citizens were home watching the President report on the State of the Union, the IAW&A Salon crowd was happily cocooned at the Thalia Studio at Symphony Space, enjoying a particularly upbeat and lively night. 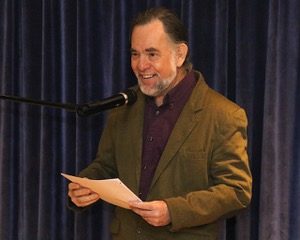 Bert Lee got the night off to a terrific start reading the first chapter of his novel Dead Man’s Coat, inspired by the story of his grandfather who came from Ireland at age 12. Dead Man’s Coat will soon be available in an eBook and in print. Bert’s a musician/songwriter who runs an Open Mic at Cowgirl, 255 W. 10th St.

Kathleen Vaughan read an insightful piece from her upcoming book – Raised by Nuns and Drunks. The chapter describes how bonds developed among the girls at the Lt. Joseph P. Kennedy Jr. Home. Kate shared the coping styles that got her and others through their feelings of abandonment and noted how the girls stayed loyal to one another.

Writer and actor Alan Gary’s essays about his childhood in Brooklyn range from tragic– he was haunted by the memory of a friend who died at age 8 – to humorous–on the fencing team in high school, Alan learned about the power of myth in standing up to bullies. 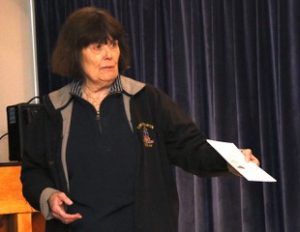 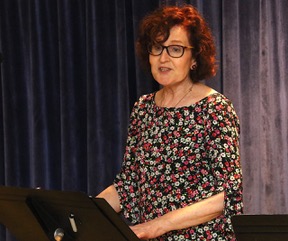 IAW&A President Mary Pat Kelly stopped by with singer Mary Deady to preview their event on Monday, February 11 at The Irish Repertory Theatre to launch Mary Pat’s latest novel, Irish Above All.  Mary Deady sang “Has Anybody Here Seen Kelly?”  If you miss the Monday launch, Mary Pat will be at the next Salon, Tuesday, February 19 at the cell. 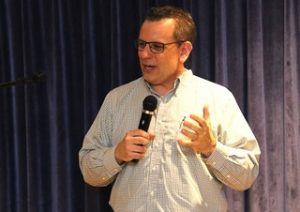 At other Salons, Andre Archimbaud has offered personal essays that revealed his Irish heart. Tonight he revealed another aspect side of himself, his wish to do stand-up comedy, with stories about his teenage years, and how his father decreed that you had to “earn your spine.” 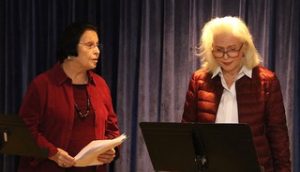 In O Holy Night, Sheila Walsh’s one-act play, two sisters, deftly portrayed by Maureen Hossbacher and Walsh discover that years ago their parish priest had affairs with several high school students. The revelations challenge their faith, the sisters’ humor and love gets them through a loss of innocence on Christmas Eve. 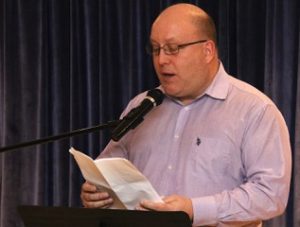 Salon producer and the night’s host, playwright and novelist John Kearns debuted two new poems.  “The Artist’s First Day of School” is about a six-year-old boy who imagines that his schoolyard fence can zap people with electricity and the contemplative “Floating in a Mountain Lake,” describes inhaling and exhaling while floating in the water and letting go of thoughts of work and responsibility. 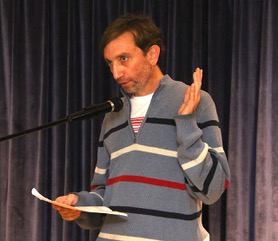 Salon newcomer, longtime poet and writer Louis Bardel contributed a beautiful poem about mature love, “36 Years to Love You.” His piece “Solitary Confinement” transcribes a story about the horrors of incarceration, which Louis’ oldest friend, the late Seanan Rork had told him. Louis has published The Allen Ginsberg Interview, a book based on his ninety-minute interview with the poet.  To learn more please visit his website. 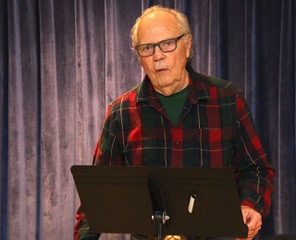 Playwright Ray Lindie’s short story “The Christmas Bullet” is based on a frightening true event and delivered with emotion. An angry older kid named Karl taunted the younger boy with a Remington semi-automatic rifle.

We know John Paul Skocik as a singer/songwriter/actor and now he’s adding another dimension: playwright. Working with another talented actor, Sam Balzac, in John’s “Where To Buy Caviar,” they play two blue-collar guys from southwestern Pennsylvania making the rounds in the local bars. The friends bemoan the state of professional football and wonder about a friend who had the audacity to serve caviar at a Super Bowl party. Sam will perform a selection of songs from his absurdist musical  (“Existential Questions of the 21st Century”) at Green Room 42 on March 8. 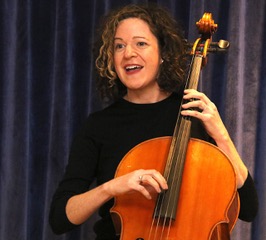 Erin and Her Cello

The charming Erin Hall, also known as Erin and Her Cello, ended the Salon on a high note. She played some of her comedic songs, accompanied by Aya Kato on (an out-of-tune) piano. They were the bluesy “Fresh Clean Towels” and “I Don’t Want to Go into Duane Reade.” The third tune, by popular demand, was about “Tiny Buns,” the edible kind. To learn more about Erin and her Cello please visit her website and please support her latest music campaign on Kickstarter.